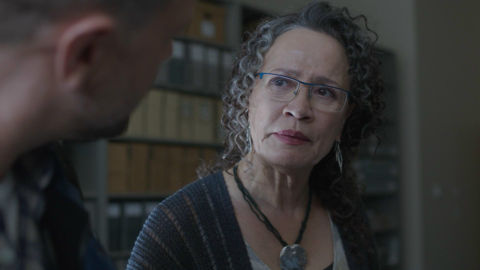 With the war between Tia and Ryn heating up, it remains to be seen whether the humans come out on top, or if the mermaids manage to secure a victory. Things are indeed tense on ‘Siren.’ As Season 3 is headed towards a volatile conclusion, Tia is probably the most formidable threat out there, since she’s been able to consolidate a mermaid army.

On the other hand, Ryn’s distracted with her child and grappling with the decision whether she wants to raise the baby in the human world, or among mermaids. The latest episode brings no respite and speeds things along. Ryn and the clan meet Robb, who’s a mermaid from an isolationist group in Alaska. Ryn knows of them to be great warriors.

While they try to enlist the clan’s help, they have to fix the unique pool the Alaskan mermaids use. Somehow, they come through and gain powerful new allies. In Bristol Cove, the situation is tenser than ever with Tia waging her war against the humans. The boats continue sinking, and she even commits to her role as a terrorist by blowing up the unique healing pool used my mermaids supporting Ryn. Will there be a showdown in the coming episode? We have the spoilers and information on when and where to watch it.

Siren Season 3 Episode 8 Release Date: When Will It Premiere?

Things are about to get troublesome in Bristol Cove as Tia and her army plan on using the siren song to control the minds of the humans. Ryn, Ben, and Maddie struggle to protect the seaside town from the vengeful mermaid army. While Ben’s injections allowed him to enjoy a romantic moment with Ryn, in the water, in the past episode, they have alarming results that worry both Ben and those around him.

Finally, we see that Xander has to juggle two duties. He tries to help Helen while fulfilling the best man’s responsibilities for Calvin’s wedding. The upcoming episode promises to be the first major onslaught on the humans by the deep sea killers, and it remains to be seen how the people retaliate. There’s no stopping the war now, and Ryn must try to come out on top of the situation. Check out the promo below.