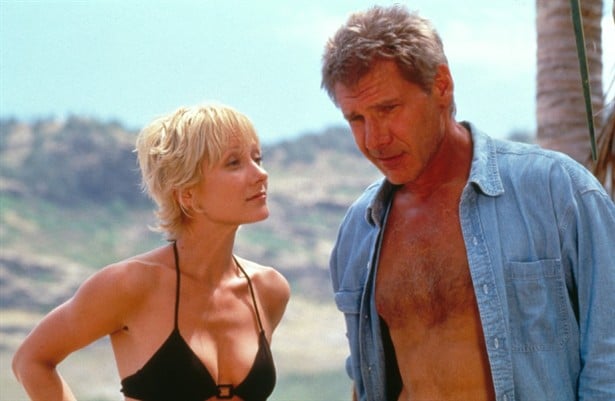 Adventure is the earliest genre of stories, and for good reason. Adventure tales prove to be extremely exciting and one does not need to explain why. They are filled with both, action and character development. Very often, when the adventure takes place in a new place (for the character), there is ample convincing setting development as well. The 1998 film, ‘Six Days, Seven Nights’ is one movie that employs all of the above thanks to its adventure comedy premise.

‘Six Days, Seven Nights’ revolves around a magazine editor, Robin. She is being transported to Tahiti by a pilot named Quinn. However, their plane crashes. But they manage to land on a South Seas island which is deserted. Despite their opposing personalities, the duo must find a way to work together in order to escape the island. To make matters worse, a few pirates want their heads too.

‘Six Days Seven Nights’ packs a rather stellar cast. Harrison Ford leads, playing the character of Quinn. He needs no introduction whatsoever, of course. Anne Heche, who has acted in films such as ‘Donnie Brasco‘ and ‘Psycho’ stars opposite Ford, playing the character of Robin. David Schwimmer of ‘Friends‘ fame is also a part of the cast, apart from Jacqueline Obradors, Temuera Morrison, and Allison Janney. Despite getting mixed reviews, ‘Six Days, Seven Nights’ managed to be a box office hit.

‘Six Days, Seven Nights’ is a movie which is mainly set on a South Seas island. This is where most of the action of the movie takes place as the leading pair attempt to escape it. Hence, it is natural for viewers to wonder where the movie’s filming was carried out. What island was used to depict the island seen in the movie?

Filming for ‘Six Days, Seven Nights’ was mostly carried out in Hawaii. At least, this is where the island scenes were shot. To be more specific, filming was undertaken in Kauai. Kauai has various dramatic cliffs that give it a more foreign vibe. Hence, that is the reason several Hollywood movies have been shot here. The specific location used for the island was Honopu Beach. Several high-profile productions like 1976’s ‘King Kong,’ and ‘Pirates of the Caribbean: On Stranger Tides‘ have been shot here.

However, those are not all the locations used to film the movie. Filming was also, apparently carried out in Los Angeles and New York City, according to IMDb.