Who Are Snow Owls on The Masked Singer? 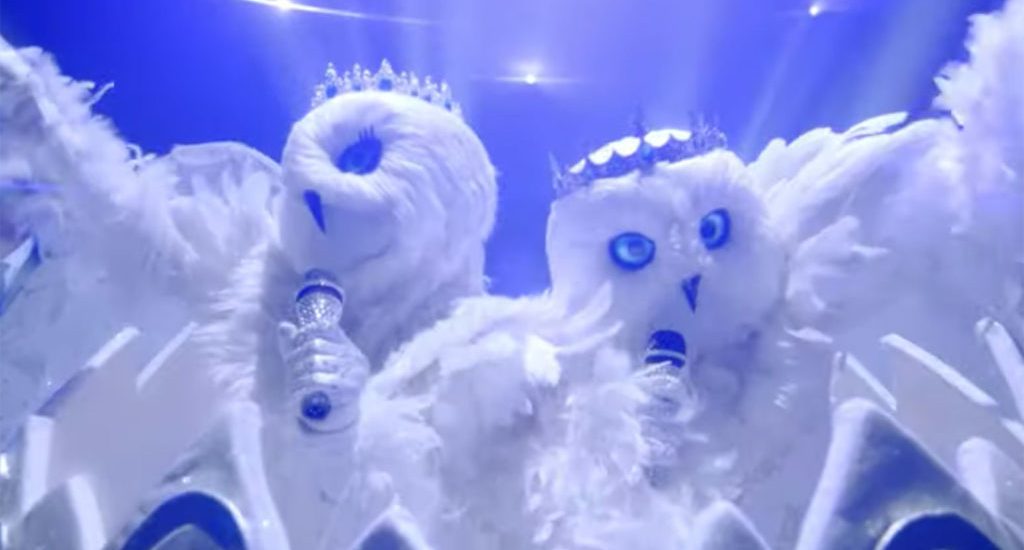 ‘The Masked Singer’ is known for its somewhat clandestine approach to reality competition. In the show, celebrities are battling it out on the stage to win the Golden Mask trophy. But what’s a competition without a curveball? This is where the larger than life costumes come into play. Each contestant embodies a character, and their identity is hidden until they get eliminated. Not even the judges know who is behind the mask! Everyone is a part of the conversation and has presented different theories about who is performing as Snow Owls in season 4. Well, here is our guess concerning the identity of Snow Owls!

Season 4 is the first time that a duo will be featured in the same costume. In fact, the outfit for Snow Owls is also the first mobile one on the show, and the contestants can make use of bicycle handles and wheels for steering it. The celebrities that compose the Snow Owls are covered in pristinely white feathers and jewels, and they emerge from a broken but equally exquisite Faberge egg. Over 1200 turquoise beads and 40,000 feathers were used to make the outfit. The big clue as to their identity is this: “You can try and figure out who we are, but as for who is more talented, it’s a tie.” They are also seen next to a barn in the clip. (Skip to 18:54 for the reveal).

This was a much tougher guess as not much information is revealed about the pair. Our best guess is that the real-life couple, Carlos and Alexa PenaVega, are participating as Snow Owls. Carlos not only starred in a show called ‘Big Time Rush,’ but he was also a part of an eponymous band. So, he clearly has a penchant for performing. Alexa PenaVega, Carlos’ wife, has also worked in the entertainment industry as an actor and singer. You may recognize her from her portrayal of Carmen Cortez in the beloved film franchise of ‘Spy Kids.’ She had also recorded songs for the movie. Moreover, Alexa has also proved her mettle in other productions like ‘Ruby & the Rockits.’

Well, owl be! 😲 You don't want to miss a new season of #TheMaskedSinger, premiering Wednesday at 8/7c.

When it comes to the reality TV world, Alexa is not a novice. She appeared on ‘Dancing With The Stars’ in 2015. Carlos, too, was featured in that season. While he was eliminated in week 11, Alexa stayed on till week nine and left the competition in 6th place. Hence, this subtly confirms the first part of the clue, as the 2-week difference in their eliminations on the show was negligible. It must also be noted that a certain undertone of rivalry is present in the phrase, but at the same time, the contestants also hold each other in high regard. Furthermore, this may be a bit of a stretch, but the words “its a tie” could also refer to them having an honest and equal relationship after tying the knot.

If looked at from a different perspective, it is possible to interpret an undertone of sibling rivalry in the given clue. This is why we considered Derek and Julianne Hough, the acclaimed dancers, in this role. In fact, both of them featured on ‘Dancing With The Stars,’ and even have Emmy awards to their names. Derek won the show six times, setting a new record in the process. Julianne has graced our screens before in movies like ‘Rock of Ages’ and ‘Footloose.’ However, Derek is serving as a judge on season 29 of the aforementioned dance competition. It is for this reason that the siblings were discounted as Snow Owls.