‘Solar Opposites‘ is an adult animated series by the creator of ‘Rick and Morty,’ Justin Roiland and Mike McMahan. The show can be streamed on Hulu. It proves to be another outlandish, yet wittily grounded animated show that will certainly be enjoyed by fans of the genre.

Apart from being the creator, Roiland also voices one of the show’s principal characters, Korvo. Once again, this is reminiscent of ‘Rick and Morty’, where he voices both the titular characters. Each episode of the series sees the central alien “family” in a self-sustaining misadventure. Quick-paced, these stories turn out to be heady and enjoyable. Hence, a somewhat non-simple ending to the first season is unsurprising. Many viewers must have wondered what the conclusion implies.

‘Solar Opposites’ revolves around five extra-terrestrial beings known as Shlorpians since they hail from a planet called Shlorp. However, they are not a “family” in the traditional sense of the word. Korvo and Terry can be considered to be the same-sex heads of the family, with the former being more dominating. On Shlorp, Korvo was assigned to be the evacuation partner to Terry, a “Pupa” specialist. Shlorp was going to be destroyed by an asteroid, and the Shlorpians had decided to send 100 Shlorpians and their “replicants” to distant planets, in hopes of finding other, habitable places. 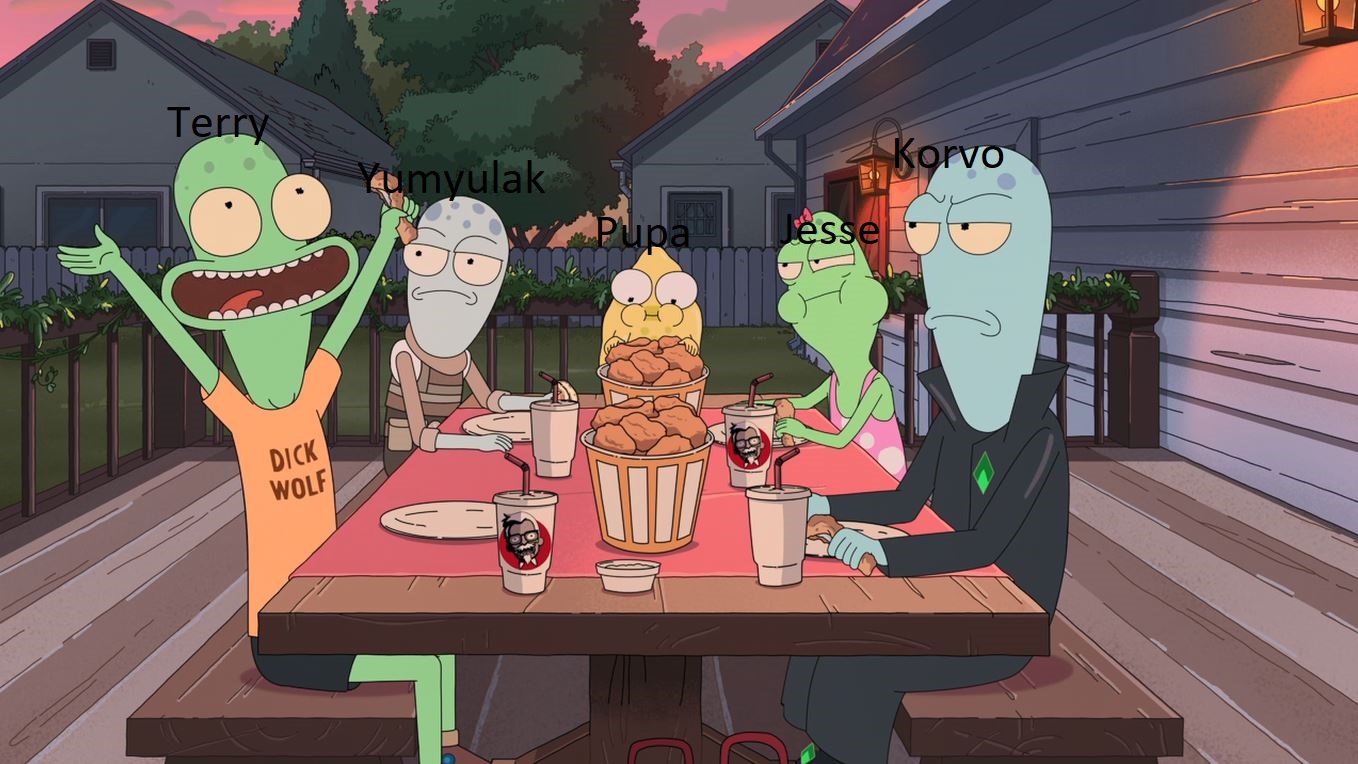 “Replicants” can be considered to be kids. Terry and Korvo were assigned Yumyulack and Jessie. It ought to be noted that Terry and Korvo might have parental duties towards Jessie and Yumylak, but the two aren’t depicted to be romantically involved. At least, they do not appear to be in a romantic relationship in the first season.

Each “family” was also assigned an organism called “Pupa.” The Pupa would keep growing in size, evolve, and end up consuming everything on the planet it was in. Then, it would terraform the planet (Earth in this case) so that it can be inhabited by Shlorpians.

Each episode of the show sees the Shlorpian “family” get into a hilarious situation, sitcom-style, which ultimately gets resolved towards the end. In the final episode, Korvo finds the Pupa feeling hot. It has turned orange. Not trusting Terry, Korvo had written down everything important about the Pupa and left it in his wallet. However, he had forgotten his wallet on Shlorp.

In order to retrieve the wallet, Terry and Korvo go back in time to put the wallet back in their spaceship. However, they end up causing a butterfly effect, which leads to a Shlorpian named Vanbo being a part of their “family.” Terry and Korvo do not like Vanbo and try to go back in time again to undo their actions. However, that ends up causing the Earth to be…a weird place. Have a look. 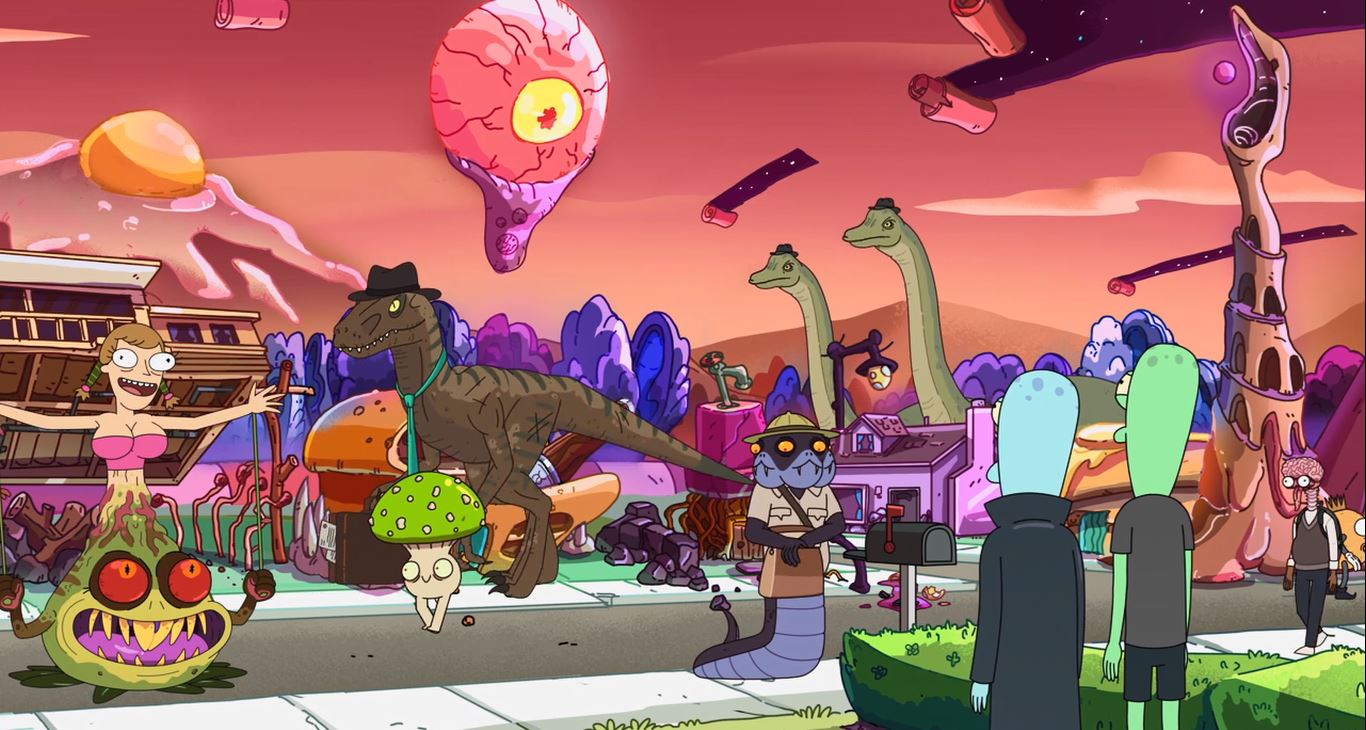 The episode ends with the Pupa changing color, something it has never done before. Yumyulack and Jesse see that but decide not to tell Terry and Korvo about it. The season ends with the Pupa breaking the fourth wall and telling viewers, “see you next season, everyone.”

The first season ends with the Pupa giving a rather evil look to viewers by breaking the fourth wall. It had just changed color previously. However, Yumyulack does not think it is anything to worry about. The replicants do not tell Terry and Korvo about it. However, given the look that Pupa gives, it can be assumed that the organism is on its way to evolution and its intended purpose.

To be clearer, the Pupa will evolve further and eventually consume everything on Earth so that the planet can be terraformed to be another habitat for the Shlorpians. However, in the final episode, Terry and Korvo suspect that the Pupa will consume them and the replicants too. Hence, the season 1 ending sets up the next season and the general direction of the show. The Shlorpian “family” would probably start to love Earth too much to want it to be destroyed (Terry already loves it). In this manner, Roiland and McMahan would provide a rather positive message of our planet being flawed but still lovable.

Did Terry and Korvo Make Earth a Weird Place?

Fortunately, Earth does NOT get transformed into the outlandish place shown in the picture above. Towards the end of the episode, it is revealed that Terry, Korvo, and Jesse had been in the Pretend-O-Deck. Pretend-O-Deck can be understood as a virtual reality simulation machine that allows the user to experience an alternate reality. In the final episode, Yumyulack finds out that Jesse has been using the Pretend-O-Deck to interact with a nicer version of him, Funyulack. Hence, fortunately, everything on the planet is exactly the way it had been. There is no Vanbo either.