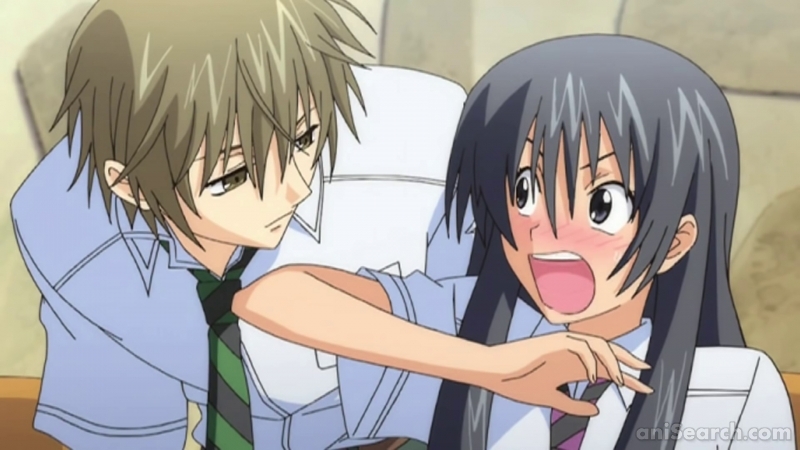 ‘Special A’ is your typical shoujo romance anime that portrays clichéd characters in the good old high school setup. Despite not having an original story and being extremely predictable, ‘Special A’ still manages to entertain throughout its span of 24 episodes. The characters are its strong point as they are all well-developed and have a distinct set of personalities. The anime also keeps shifting its focus away from the main characters from time to time and brings light on the relationships of other characters as well.

When it comes to the technical aspects of the anime, the sound and art are pretty good but not exceptionally great in any way. The color scheme during romantic scenes and even the background scores during these are beautiful and fit right in with the theme. Overall, ‘Special A’ is a light-hearted anime that you can binge on when you want to watch something that’s enjoyable and at the same time does not require too much thinking. And if you love Shoujo anime, then this is one of the best out there.

Special A Season 2 Release Date: When will it premiere?

‘Special A’ season 1 released on April 7, 2008 and came to an end on September 15, 2008. During this span, it aired a total of 24 episodes with each one of them being 24 minutes long. Since the release of this season, there haven’t been any other OVA adaptations or spin-off side stories of the series which is quite surprising considering the popularity of the anime. Soon after its initial release, many fans were sure that this Manga adaptation will be further continued but it has been a little over a decade now and we haven’t heard anything about its renewal. The anime also does not cover the entire manga and only picks up important parts of it. Even then, the conclusion of the manga comes later than the final events of the anime. So clearly, the lack of source material is definitely not an issue.

Almost every year now, a ‘Special A’ fan either tries to request a new season of the show by starting petitions or by enquiring about it on forums but from what it looks like, the creators of the show have left it far behind. After over 10 years since its release, it seems very less likely that the creators will ever think of going back to it. Even then, if there is any news regarding its renewal or ‘Special A’ season 2 release date, we will update it here in this section. Till then, you can always read the manga to know more about the story or you can watch other similar shoujo anime.

‘Special A’ season one is available on HIDIVE and Amazon Prime with its original Japanese audio and English subtitles.

Hikari Hanazono has always been the best at everything she does be it studies, sports or just anything else. She grows up believing that no one can ever be better than her until one day she meets Kei Takishima. When she realizes that he could be her only worthy opponent, her ego and overconfidence step in as she decides to challenge him. But every time she tries to win against him, she ends up losing and keeps rechallenging him again and again only to face her failure every single time. This is when she swears that she will do everything in her power to be better than Kei at every single thing be it academics, sports or anything else at school.

To make her dream of being better than him a reality, she joins the same prestigious high school as him and soon the two make their way to the top of their class. Securing the first two ranks every single time, the two become prominent members of the school’s elite Special A group that is only reserved for the top 7 students of the school. Hikari becomes so busy competing with Kei that she fails to notice that he actually has a thing for her.

‘Special A’ follows the lives of all the members of the school’s elite club who, with time, learn a lesson or two about friendship, competition and also a little bit about love.

Hikari Hanazono is always ranked second in the school because Kei Takishima always manages to score better than her. Almost throughout her high school life, she tries to be better than Kei at everything but fails almost every time. She has long black hair that is tied up as pigtails when she is cooking or playing a sport. She is very energetic and kind-hearted but she takes her studies very seriously and can’t stand it if someone does better than her.

Tadashi Karino is also a member of the Elite Special A and holds the 5th rank in school. He is the son of the director of the school and is punished if he ever goes below the 5th rank. Tadashi has always had a thing for Akira and often casually teases her. He also loves food, especially when it has been cooked by Akira. He is much smarter than he looks and is often attacked for acting careless and reckless all the time.

Kei Takishima is the top student of the school and is the son of the CEO of Takishima Group. Hikari always tries to compete with him but he does not even care if she somehow manages to get ahead of him at something. While she sees him as her only competition, he falls deeply in love with her. He is a smooth winner and is never concerned about his rank. That’s probably the reason why he excels every single time and leaves all the others behind who waste their time competing with each other.

Akira is another member of the Special A who is ranked 6 in the entire school. She loves cooking food and always introduces the members of the club to new dishes and teas. She is usually seen with neck length purple hair that have fringes reaching her eyes. When she’s busy sipping on her luxurious teas with her homemade pastries, she shows her elegantly calm side. But when provoked, she gets pissed very easily.

Ryuu is ranked 7th in the school and according to his rank, he is the last member of the Special A group. Ryuu actually has the potential to much better but he fails to reach what he is truly capable of because, during exams, he focuses most of his attention on Jun and Megumi who either get bored or just sleep off. He later proves how smart he is when answers 1000 questions correctly in a span of just 10 minutes.

Jun Yamamoto is the twin brother of Megumi Yamamoto and is ranked 3rd in the entire school. He is the son of a famous vocalist and music producer. When around girls, he gets very shy and fails to have even the simplest interactions with them. But later, after watching a hypnotic TV show that allows its viewer to lose all shyness around women, he becomes somewhat of a lady charmer. Otherwise, he usually prefers staying quiet and avoids disputes of any sort. He shares a very close bond with his sister Megumi and the two of them have a shared interest in music which they have inherited from their father.

Megumi is Jun’s twin sister who holds the 5th rank in school and since childhood, she and her brother, have both been really close to Ryuu. She avoids talking to people in order to preserve her singing voice. But when she opens her mouth to sing, her voice turns out to be so incredibly moving and powerful, that knocks people out as soon as they listen to it.