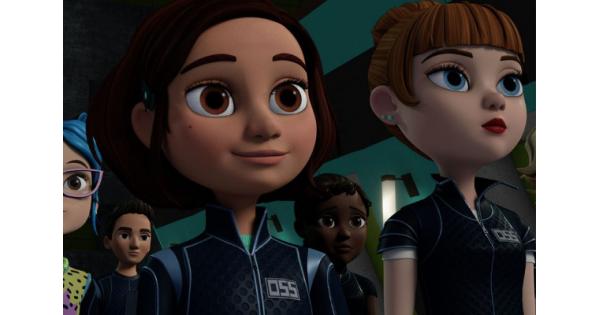 ‘Spy Kids: Mission Critical’ is an animated TV series created as a Netflix original by Michael Hefferon, Sean Jara, F.M De Marco, and Robert Rodriguez. Based on the popular ‘Spy Kids’ franchise, this adventure-comedy is a reboot of the original version, which first premiered on the streaming giant in 2018. The story follows sister-brother duo, Juni and Carmen Cortez, after they enroll in the Spy Kids Academy — a top-secret school for grooming kid agents.

‘Spy Kids: Mission Critical’ features an ensemble cast, voiced by a crew of talented stars. The voiceover actors include Ashley Bornancin as Carmen Cortez or Tango as well as Barracuda and Carter Hastings as Juni Cortez or Aztec. Joining them is Nesta Cooper as Scorpion, Caitlyn Bairstow as Glitch, Nicholas Coombe as Ace, and Richard Ian Cox as Sir Awesome.

Spy Kids: Mission Critical Plot: What is it about?

‘Spy Kids: Mission Critical’ follows siblings Juni and Carmen Cortez once they get admitted to a covert institute called Spy Kids Academy. Here, promising young children receive training to grow into top-secret, trained spies. However, complications arise when another counter agency with evil intentions starts threatening the safety of the world. S.W.A.M.P. (Sinister Wrongdoers Against Mankind’s Preservation), led by Golden Brain, has been orchestrating a sinister plot to destroy humanity. Although our Mission Critical team may not be ready yet, they need to dive headfirst into the issue since grown-ups have failed in finding a solution. Now, it becomes the sole responsibility of Juni and Carmen to train their fellow peers so that they can join hands and tackle this grave problem.

Season 2 picks up the story right after season 1’s events and chronicles the multiple adventures of The Mission Critical kids as they attempt to uncover a mole sent on an assignment by Golden Brain to steal the extremely powerful Pinnoquinox serum. The season starts with the youngsters beginning their second semester after executing some successful operations against S.W.A.M.P. Glitch welcomes a new A.I. assistant, Gablet. But our heroes’ peace is short-lived when they learn that Golden Brain has transformed his IT guy, JT, into a computer virus called The Worm, which is uploaded by the mole into the Academy Mainframe. After there’s a power outage in the institute and Gablet goes offline, Glitch has to use his knowledge to remove The Worm from the system.

Meanwhile, Aztec attempts to help Ace overcome his fears. Juni devises an idea of using hypnosis to cure Ace and he succeeds, only to inherit all those insecurities himself. On the other hand, there is increased chaos in the academy because the cadets cannot figure out the mole among them and start accusing one another. Carmen and Juni devise a plan to unmask the mole and after a few mishaps, learn that his identity is Agent No-One.

After many failed attempts and struggles, the crew finally learns the real name of the rogue mole. He is an agent who was blackmailed by Golden Brain into becoming Agent No-One, with the promise that the former would disclose the latter’s parents’ whereabouts if No-One is successful in his mission of retrieving the Pinnoquinox serum. And to Mission Critical’s horror, the serum is indeed stolen and is with Golden Brain, who uses it to enhance his cybernetic body. However, Agent No-One realizes his mistake and plants an anti-serum curated from a rare mushroom’s juice to reverse Golden Brain’s intentions. Toward the end, Golden Brain’s body is placed in stasis and Agent No-One is appointed as the 7th official member of Mission Critical.

So, who is Agent No-One? We guess, its disclosure would be the ultimate spoiler. Watch the series and follow our heroes as they uncover the villain-turned-do-gooder in this suspense-packed, adventure series.

‘Spy Kids: Mission Critical’ season 2 premiered on Netflix on November 30, 2018. It comprised 10 episodes, bringing up the total run of the show to 20 episodes.

Now, as far as a third season is concerned, we have some good news for you. The show had initially started out with a two-season run in mind. But after four weeks of the release of the first season, F.M De Marco, who is the showrunner, and John Tellegen, who is the editor/writer, confirmed that they had future plans and a script beyond the second season. So, yes, a third installment is definitely underway. And although Netflix has not come up with a definite air-date yet, we expect ‘Spy Kids: Mission Critical’ season 3 release date to be sometime in early 2020.

While we wait for an update on ‘Spy Kids: Mission Critical’ season 3, you can watch the trailer for season 2 below. You can also head to Netflix if you wish to catch up on all the previous seasons from the series.