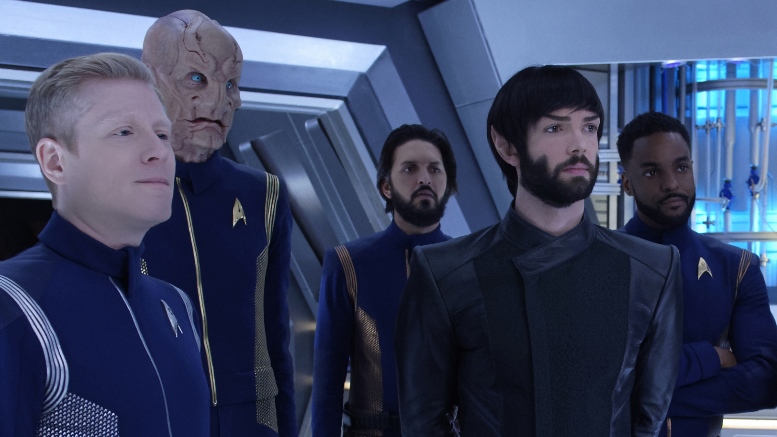 Trekkies have had the chance to explore a new side of the ‘Star Trek‘ universe thanks to ‘Star Trek: Discovery,’ which is set ten years before the adventures of Spock, Kirk, and the Enterprise. The USS Discovery takes viewers and those on board to new worlds, and we see how one Starfleet official learns that they must understand all things alien. Due to the exploratory nature of the series, there is a wide variety of locations we are treated to. The visuals are stunning, and each place tells its story. Obviously, viewers are smart enough to know that real-life spots stand for the alien places in the space saga. So, curious about where has ‘Star Trek: Discovery’ been filmed? Well, we have got you covered.

The series has primarily made use of three locations – Toronto and Hamilton in Canada, and Jordan. Of course, most of the show is focused in Canada. Only some parts have been filmed halfway around the world in Jordan. Without further delay, let us tell you about the specifics of the shooting locations!

Since space is the final frontier, ‘Star Trek: Discovery’ has had to head to Toronto’s reliable studio system for certain scenes. A lot of filming takes place at the Pinewood Toronto Studios in Port Lands. It is essentially where the sound stages are converted to the interiors of the impressive ships. So, the scenes involving USS Discovery are technically shot here. You can check out a post about filming taking place here.

So badly want a tour of the Discovery set, Star Trek is being shot in my hometown, but Pinewood Studios doesn't allow tours. 🙁 Best I can do is drive by Pinewood Studios in the Portlands. @PinewoodStudios @StarTrek @jonathansfrakes https://t.co/3U44tmHAnB pic.twitter.com/0LEz967kWJ

Other Toronto locations that show up in the series include the Hearn Generation Plant and Cherry Beach Park at Unwin Avenue, Woodbine Beach at Lake Shore Boulevard East, the Integral House at Roxborough Drive, and Knox College. The college is a part of the University of Toronto and is located on St. George Street. Here’s a post about filming taking place in the college.

I've been watching Star Trek: Discovery and identifying locations in Toronto. Pretty sure this is Knox College at U of T. pic.twitter.com/Eb3ibwyPFX

Other locations in Canada where ‘Star Trek: Discovery’ has been filmed include Kelso Conservation Area and Hilton Falls in Milton. You can also spot the Lafarge Quarry at Dundas, Ontario’s Vaughan City Hall, the Ball’s Falls & Historic Village at Jordan Station, and Bluffer’s Sand Beach at Scarborough. Fans have been pleased to see the Aga Khan Museum on the series, as the Vulcan Science Academy. It is known for Islamic art and Muslim culture and is located in North York. Here’s a post about filming at this spot!

If you aren't aware, Star Trek Discovery is filmed in Toronto and this is sooooo the Aga Khan Museum. pic.twitter.com/7XQcXxCOC7

The Crepusculan Homeworld is filmed at Wadi Rum in Jordan. However, just the pilot episode has been shot in Jordan. The production team completely shifted its base closer to home after shooting the scenes in the desert. You can check out a post about the same below.