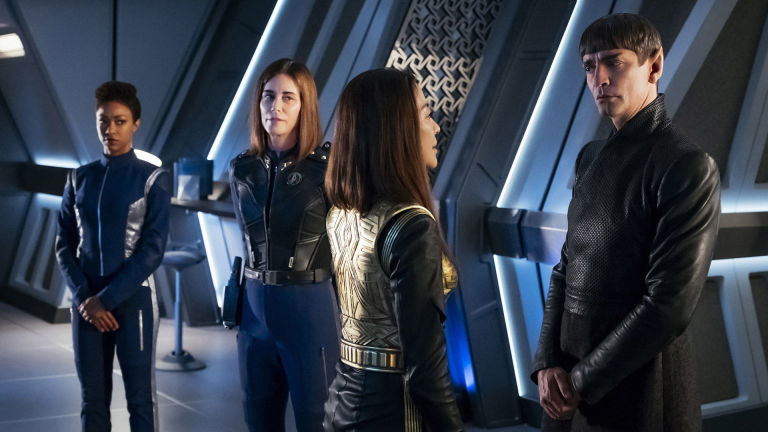 No sci-fi fan needs an introduction to the ‘Star Trek’ franchise, and those who have been are avid followers of the franchise should not miss out on ‘Star Trek: Discovery’. Initially created by Brian Fuller and Alex Kurtzman, ‘Star Trek: Discovery’ is an American space opera web television series that airs on CBS All Access and, notably, is the first ‘Star Trek’ series to air after the conclusion of ‘Star Trek: Enterprise’ in 2005.

‘Star Trek: Discovery’ follows the crew of the USS Discovery as they embark on various thrilling adventures across the galaxy in the midst of an ongoing war. The show was announced by CBS in November 2015, and after significant delays owing to internal conflicts, Season 1 of the show, consisting of 15 episodes, finally made its way to viewers’ screens on September 24, 2017. Not only was Season 1 favorably received by television critics and viewers, it also led to record subscriptions for CBS All Access. Understandably, CBS wasted no time in renewing the show, and a second season was ordered in October 2017. More than a year after its renewal, Season 2 of the show made its way to viewers’ screens on January 17, 2019, and was once again a hit among television critics and viewers. And now, to the delight of everyone, CBS has renewed the show again for its third season. Here’s everything you need to know about Season 3 of ‘Star Trek: Discovery’.

Star Trek: Discovery Cast: Who is in it?

In ‘Star Trek: Discovery’, Sonequa Martin-Green plays the role of the main protagonist, Michael Burnham, who is a Science Specialist on the USS Discovery. While ‘Star Trek’ shows and movies have typically followed the captain of a starship, Burnham was given the designation of a Science Specialist to freshen things up. Commenting on the same, show co-creator Brian Fuller had told Entertainment Weekly, “We’ve seen six series from the captain’s point of view; to see a character from a different perspective on the starship — one who has a different dynamic relationships with a captain, with subordinates, it gave us richer context.”

Other important cast members who play the roles of USS Discovery crew members include Doug Jones as First Officer Saru, Shazad Latif as Chief of Security Ash Tyler/Voq, Anthony Rapp as Chief Engineer Paul Stamets, Mary Wiseman as cadet Sylvia Tilly, and Jason Isaacs as Captain Gabriel Lorca. Additionally, Anson Mount plays the role of the iconic and legendary Christopher Pike, the Captain of the USS Enterprise, who temporarily takes charge of the USS Discovery in the show. In Season 2, we see Ethan Peck joining the show as the legendary Spock.

Star Trek: Discovery Plot: What is it about?

The show is set a decade before the events of the original ‘Star Trek’ series, and follows the crew of the USS Discovery amid an ongoing war between the United Federation of Planets (UFP) and the Klingon Empire, consisting of united Klingon houses. Of course, being set in the midst of a war, the show is far from flowery. The Captain of the USS Discovery, Gabriel Lorca, is portrayed as a man hell-bent on winning the war against the Klingons, and he’s willing to go to any lengths to ensure victory. This in itself gives the show a dark spin, as characters aboard the USS Discovery, including the main protagonist Burnham, are often pushed into morally grey areas, and have to take agonizing decisions that come back to haunt them.

Further, the conflicts don’t end there – the emotionally taxing and stressful atmosphere of war often sees conflicts erupt between the crew members of the USS Discovery, thereby allowing the show to explore the emotional depths of characters and inter-character relationships, rather than focusing simply on action. This new approach brings an unprecedented depth to characters and makes them relatable to viewers, and the emotional aspect of the show makes for a fresh, modern take on a classic franchise.

It therefore does not come as a surprise that ‘Star Trek: Discovery’ has found favor among television critics – Season 1 of the show enjoys a good score of 82% on Rotten Tomatoes, and Season 2 fares even better, with a score of 84%. Among viewers, too, the show is quite popular, and it has a good rating of 7.4/10 on IMDb, after nearly 65,000 votes.

Star Trek: Discovery Season 3 Release Date: When will it premiere?

Season 2 of ‘Star Trek: Discovery’ made its way to viewers’ screens on January 17, 2019, and within a month of its premiere, CBS, on February 27, 2019, renewed the show for its third season. When the renewal announcement was made, it was reported that the writers of the show had already begun work on Series 3, and reportedly, filming is slated to begin from July 8, 2019.

While we wait for CBS to announce a release date for Season 3, here is the trailer for Season 2 to give you a glimpse into the show and the story thus far.