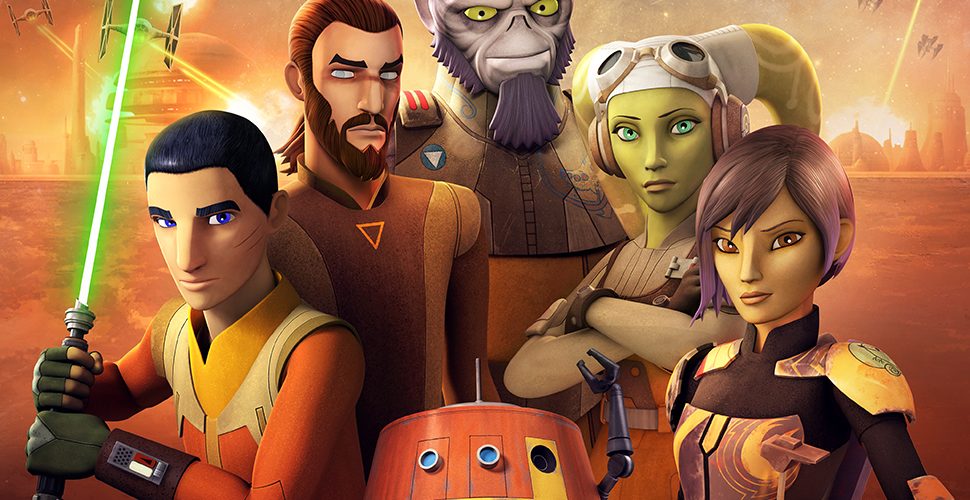 An adventure and action based sci-fi drama series, ‘Star War Rebels’ has been created by Dave Filoni, Carrie Beck and Simon Kinberg, produced by Lucasfilm Animation and distributed by Disney–ABC Domestic Television. The series is obviously based on George Lucas’ ‘Star Wars’. It airs on Disney XD and first premiered on October 3, 2014.

The series takes place in a time when the Galactic Empire is maintaining its rule on the galaxy. The last of the Jedi Knights is being hunted down by the Imperial forces, and a rebellion against the empire is on the verge. That’s when the star-ship decides to stand against it. The visualizations of the show have been influenced by the concept of the original ‘Star Wars’ trilogy, and the show has its storyline starting five years before ‘A New Hope’ and fourteen years after the ‘Revenge of the Sith’.

Star War Rebels Cast: Who is in it?

The star cast of the animated sci-fi series includes: Taylor Gray who voices Ezra Bridger, Vanessa Marshall who lends her voice to Hera Syndulla, Freddie Prinze Jr., of ‘I Know What You Did Last Summer’ fame who voices Kanan Jarrus, Tiya Sircar, known for ’17 Again’ and ‘The Good Place‘, who voices the character of Sabine Wren, Dave Filoni who lends his voice to “Chopper” and Steven Blum who voices Garazeb “Zeb” Orrelios. From the sophomore season, Dee Bradley Baker joins in to voice the role of Captain Rex.

Star War Rebels Plot: What it is about?

‘Star Wars Rebels’ revolves around a group of ragtag but clever members aboard a starship, who unite to fight the tightening grip of the Empire, even as it begins to establish itself as a fearsome force in the galaxy and starts to hunt down the last of the Jedis. Chronologically speaking, the events of the show is set fourteen years after the fall of the Galactic Republic and the Jedi Order, as well as the rise of the Galactic Empire that we get to see in ‘Revenge of the Sith’. This group of rebels aboard the freighter starship called Ghost decides to start conducting covert operations against the Imperial garrison. These mostly take place on or around the planet Lothal and the surrounding planets, all of which are tormented by the rule of the Empire.

If you are one of those people who like their ‘Star Wars‘ content dark, then you are in for a disappointment in this show. It keeps the tone fun, and there is a lot to be enjoyed as the plot unfurls. We are introduced to Ezra, who is a young orphaned teenager (very reminiscent of Aladdin), when he encounters a group of outlaws. Soon he teams up with them, drawing the attention of Kanan one of the last remaining Jedis, with his latent Force abilities.

Over the seasons, we get to know more of the team as the show progresses and the battle against the Empire heats up. It all ends on a very touching note, when Ezra uses his connection to the Force to save his teammates from the Empire, and seemingly sacrifices himself in the process. IGN has surmised the situation well, speaking of the show’s potential, and mentioning “With well-done action, strong visuals — those Wookiees aside — and a successful bid to recapture a specific original Star Wars vibe, there’s a lot to enjoy here.”

Overall, ‘Star Wars Rebels’ is bound to be remembered for the constant positive messages that the rebels convey as they try to undermine the Empire. The relationship between Ezra as the apprentice and Kanan as the new Jedi master is also an impressive one, as they both have their virtues, and it is refreshing to see them compromise for each other’s sake and well being. Considering the threat of the Empire within the Star Wars universe, the perils and violence are high, with plenty of lightsabers, blasters, and hand to hand combat sequences. Taking into consideration the wider target audience of the show, it does not draw particular attention to the character deaths, and one might say that this series is bound to be fun for both kids and adults, especially if you are familiar with the franchise.

Star Wars Rebels Season 5 Release Date: When will it premiere?

‘Star Wars Rebels’ season 4 premiered on October 16, 2017, with the first two episodes divided into two parts. It aired until November 13, 2017. On February 19, 2018, the series picked up after a winter break for the release of ‘Star Wars: The Last Jedi’. However, after that, the show came to an end. It was not a decision made by Disney XD, but more of a pre-decided thing. When asked about the end of the show, Filoni merely said that he could not talk about it, instead of an outright ‘no’.

There is a chance that the series might get picked up and carry on from Season 5 as the others go in search of Ezra. However, this won’t happen anytime soon, since Filoni and his team are busy on ‘Star Wars: The Clone Wars’ for Disney+. In the absence of an official announcement, ‘Star Wars Rebels’ season 5 release date is difficult to predict, but we are definitely hoping for a revival of the show somewhere down the line.

You can check out the trailer for Season 4 of ‘Star Wars Rebels’ below, and if you have not seen the show, you must check it out if you happen to be a fan of the franchise.