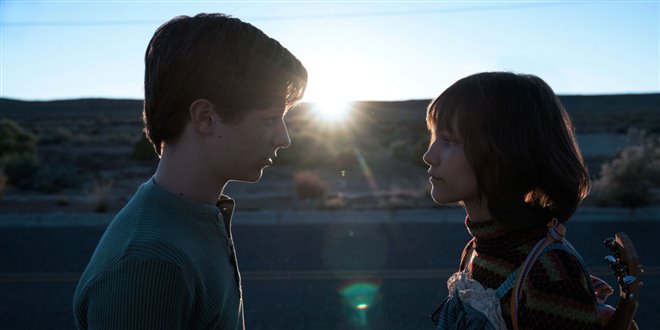 ‘Stargirl’ is a Disney movie and that is the aptest and only description the film needs. On the outset, there seems to be no conflict, and the film just marches along without a real story than boy-meets-girl. But towards the end, it wraps viewers with a surreal message that would surely change anybody’s outlook.

Leo started wearing a porcupine tie in memory of his deceased father everyday. At his new school, he was beaten up and his tie cut. Then, every birthday, he would receive a new tie from a mystery person. His new school is in a town called Mica and the school has never won a single trophy.

Then, the movie flashforwards to when Leo is 16. Stargirl is new to the school and sings for Leo in the canteen since it is his birthday. Kevin, Leo’s best friend tells Leo that he should ask her out. At an inter-school football game, Stargirl sings and cheers the players and audience up. The school wins. Stargirl becomes popular at school and everyone starts to think she is a good luck charm. Kevin asks Leo to ask Stargirl to appear on ‘Hot Seat,’ a show that the school’s A.V. club runs. Kevin hosts it.

Leo tells a man named Archie about her. Archie runs a summer camp that Leo had attended. That’s how the two had become friends. Archie tells Leo that Stargirl had also attended the camp and was homeschooled. Leo follows Stargirl home. Then, he asks her if she wants to appear on ‘Hot Seat.’ She declines.

Stargirl starts to sing during the football matches regularly. The team starts to win. Leo goes to Stargirl’s house and tells her that he does not know how to make plans with her since she does not have a phone. They converse with each other while walking. She tells Leo how she has been using a bike that belongs to a boy who has been hospitalized. She returns it as he is going to return home soon. Stargirl wins a speech competition at school, defeating Kevin and earning the opportunity to represent the school in an inter-school competition.

Stargirl tells Leo about her process of feeling nothing and having an optimistic attitude. She shouts “I’m rain” in the process and it actually starts to rain. Leeo asks Stargirl if she is magic and if she was the one that left him the ties. She says no. Stargirl kisses Leo. Later, she asks Leo if he would accompany her to the speech competition.

At another football game, the school starts to lose. The opposite team’s star player gets injured and falls to the ground. Stargirl holds his hand and shows him support. The school does not like that. Stargirl tells Leo that she wants to appear on ‘Hot Seat.’

While she is being interviewed by Kevin, the school’s students start to ask her why she helped the other team’s player. One girl asks Stargirl about the bike she left for the boy in the hospital. She is the boy’s sister and tells him that her family had left the bike on purpose since his brother was not ready to ride it. After Stargirl returned the bike, he got injured while riding it and cannot ride a bike anymore.

Leo asks Stargirl why she cannot be like everyone else and mind her own business. Stargirl feels bad, asks Leo if that’s what he wants and leaves. The next day, Stargirl texts Leo, insisting that he call her Susan (her birth name). She is near Leo and has dressed up differently.

On their way to the speech competition, Leo asks Stargirl if she wants to be his date for the winter ball. She agrees. During the competition, Stargirl changes her speech. She speaks about change and waiting for things to develop into something beautiful with patience. Stargirl ends up winning the competition and brings the first trophy for the school. However, the school’s students do not care. Stargirl tells Leo that Susan won the award, not her. She says that she cannot be who she isn’t and declines to go to the dance with him.

Kevin calls Leo and reminds him of the first time they had met: after Leo’s tie was cut by a few bullies. Leo gets a record player as a gift with a note saying “I hope you still go to the dance” and that he will find a surprise if he does. At the winter ball, Stargirl comes in a pretty dress. She signs Leo up to sing in front of everybody. He ends up singing and defeating his stage fright. Stargirl apologizes to the girl whose brother’s bike she returned. Crying, she leaves. Her mom sells the house and Leo never sees her again.

Leo wonders if she was even real. The school wins more trophies. People at school start to make stories about her. Archie tells Leo that the best things in life are both magical and real. Archie shows him a cabin that Stargirl used to use. The cabin has information about Leo and the school.

‘Stargirl’ ends in a somewhat open fashion, leaving viewers to wonder whether the titular protagonist was real or not. The answer is somewhat surreal. Stargirl was definitely a real person. It is evidenced by Leo continuing to receive gifts from her even after her departure. Moreover, Archie also shows Leo Stargirl’s cabin with actual things belonging to her.

The ending signifies the fact that experiences shape people’s lives and personalities. The film shows how Stargirl touched and changed a lot of people’s lives. Hence, even in her absence, she lives in each and everyone’s heart. The fact that she had to leave might mean something rather saddening: the fact that it is tough to be oneself.

However, people live in stories, memories and in the impact of interactions that they have with others. This is why Stargirl’s departure is not portrayed with grief. In fact, it is a happy moment. If everyone in the world just lets everyone else be who they are and invest time and effort in forming positive relationships, things would just be effortlessly brighter.