What is ‘Stargirl’ Based on?

Walt Disney Studios is best-known for its heartwarming original content. Along with, of course, the nostalgia it incites in each person who grew up watching the said content. And well, who didn’t? With the introduction of Disney+, the Mouse House is extending its empire, steadily paving its way into the “streaming wars”.

Through the streaming service, the studio is all set to produce solid fresh content, and back it up with a strong dose of nostalgia – giving us the best of both worlds in more ways than one. While Disney+ is still establishing itself, it seems like its latest endeavor, ‘Stargirl’ might just be what it needs to change the game.

‘Stargirl’ is directed by Julia Hart, best known for ‘Miss Stevens’ and ‘Fast Colour’, both of which earned her critical acclaim. Hart also co-wrote the film’s screenplay along with Kristin Hahn and Jordan Horowitz. The Disney original is a touching and compassionate coming-of-age narrative about self-expression and nonconformity. The film gets its name from the titular character, Susan “Stargirl” Caraway, a free-spirited new kid in the otherwise quiet Mica High School.

However, ‘Stargirl’ centers around Leo, a shy teenager struggling to blend in, and follows his point of view. It explores the themes of first love, growing up, and the fickleness of popularity, as it follows the impact Stargirl has on Leo, who finds himself falling in love with her, and the rest of the school, who initially shunned her.

What sets ‘Stargirl’ apart from other recent Disney productions is that it follows a relatable premise. It is rooted in the everyday realities of high-schools, where young adults sacrifice their individuality in order to fit in. It also deals with these issues with a sense of tender emotionality. ‘Stargirl’ does not need  supernatural elements to drive home the point it wants to make. In fact, the film is essentially all about the magic in the everyday, about the potential of humanity and human kindness. But could someone like Stargirl really exist? Well, the answer may surprise you. Read on to find out!

Is ‘Stargirl’ Based on a True Story? 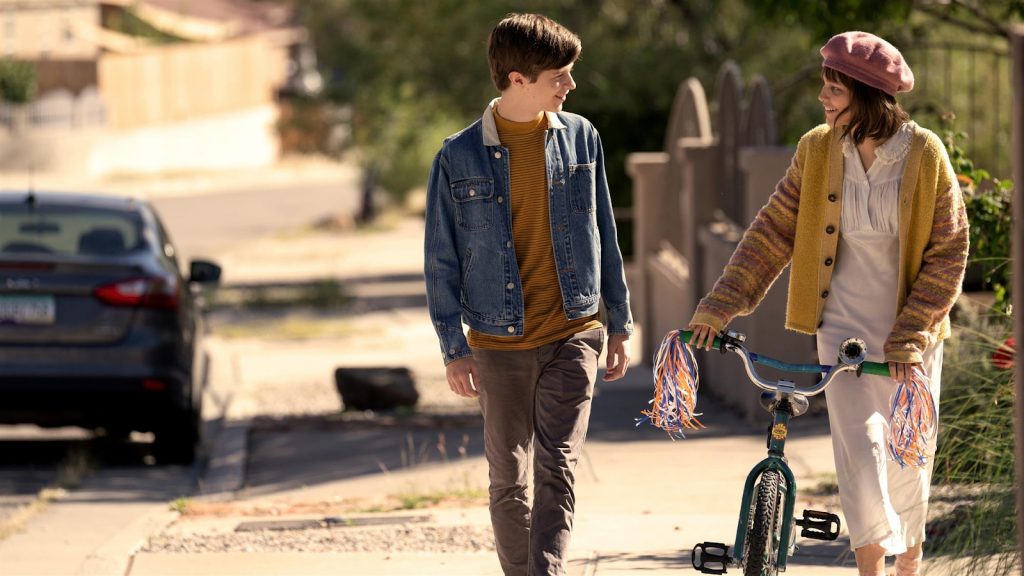 No, ‘Stargirl’ is not based on a true story. Instead, it based on a novel by Jerry Spinelli of the same name. The book received widespread acclaim for its message of nonconformity, and was a New York Times Bestseller. It also has several awards to its name, including a Parents’ Choice Gold Award.

The novel is largely considered to be under fictional realism as a genre as it looks at the everyday, and centers around a girl who dares to be different in a society that is too afraid to. Though Stargirl is certainly not based on a true story, it has certainly been inspired by Spinelli’s own memories and a very special person in his life.

Interestingly, Spinelli once stated that Giraudoux’s Ondine was a major influence in the book. The play centers around a tragic love-story between a knight and a water-nymph. While describing Ondine’s character, Spinelli’s once stated, “She is not quite human — or maybe too much so”. This almost echoes a line from Stargirl where Archie describes Stargirl to Leo as, “She is us more than we are us. She is, I think, who we really are. Or were.”

However, the primary inspiration behind Jerry Spinelli’s Susan “Stargirl” Caraway was Eileen Spinelli, his wife, and fellow-author. In an interview he revealed that he drew aspects of Stargirl from various sources, including his memory, imagination and the literature he had read over the years. But he went on to state,”The one real-life person who embodies more of those aspects than anyone else I know is my wife and fellow author, Eileen.” In fact, on Penguin Random House‘s “About the Author” section on Eileen Spinelli, Jerry has written about this:

“Listening to her talk about her childhood over the years, and getting to know this special person I happen to be married to, I found myself using Eileen again and again as my model as I developed the character of Susan Caraway, who names herself Stargirl. Two examples: Stargirl keeps notes on other people, so she knows when their birthdays are, what they like to eat, etc; and Stargirl has a “happy wagon.” I lifted both of these features from Eileen’s personal history”

Apart from this, Sonny Liston, a professional boxer from the ’50s and ’60s, who Spinelli also dedicated the book to, was another inspiration. There is a particular scene in the novel where Spinelli is greeted by just one person after her oratory contest victory. This was taken from Liston’s own life, where he had once expected a hero’s welcome following a championship victory but was greeted by no one. Spinelli had once commented how he would have loved to meet Liston and dump a teacup of confetti on his head.

The context in which Spinelli’s Stargirl was written also becomes relevant. The book was first published in 2000, almost a year after the Columbine High School shootings in Colorado, which resulted in deaths of 12 students and a teacher. The novel’s message about acceptance and its emphasis on compassion served to combat such situations.

This is also perhaps a reason why Stargirl became a required reading for middle-school and high-school students. The impact Spinelli’s book had is in ways, unparalleled. In 2004, inspired by the book, students founded a “Stargirl Society” in Kent, Ohio. Given the current state of affairs in America, Disney+’s adaptation of Stargirl becomes more relevant than ever today.