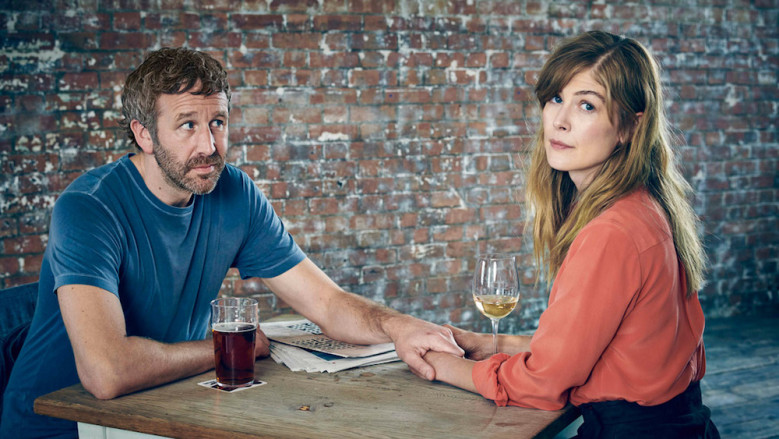 ‘State of the Union‘ is a comedy television show that airs on SundanceTV. It is written by Nick Hornby and directed by Stephen Frears and first premiered on January 28, 2019, at the Sundance Film Festival. Executive produced by Hornby, Frears, Jamie Laurenson, Hakan Kousetta, Iain Canning, and Emile Sherman, it follows “Louise and Tom who meet in a pub immediately before their weekly marital therapy session. Each episode pieces together how their lives were, what drew them together and what has started to pull them apart”. This ten-part show officially premiered on television screens on May 6, 2019.

State of the Union Cast: Who is in it?

The main two protagonists in ‘State of the Union’ are played by Rosamund Pike and Chris O’Dowd. You might already know Pike from her critically acclaimed, psychological thriller ‘Gone Girl‘. This English actress is also recognized for her roles in ‘Die Another Day’, The Libertine’, and ‘Pride & Prejudice’. On the other hand, O’Dowd is an Irish actor and comedian, mainly known for his performances in ‘Get Shorty’ and ‘The IT Crowd’.

State of the Union Plot: What is it about?

‘State of the Union’ follows an abbreviated runs format, where the entire ten episodes are covered within a span of two hours. It revolves around an estranged couple and parents, Tom and Louise, who meet for a quick drink in a nearby pub just before they start their weekly therapy session. Louise is the primary breadwinner and homemaker of the family, whereas Tom is the underachieving husband. In their regular meet-ups which last for around 10 to 12 minutes each, we get glimpses about their past (though their discussions, not flashbacks) and also gain wisdom about the nuances of long-term relationships.

Most of their arguments and banters revolve around Louise revealing how Tom is a loser and the latter pointing out his wife’s infidelity. These debates, though supposed to be serious, are simply hilarious. For example, when Tom asks her if her “short-lived affair was a series of mistakes or just one mistake made four times”. Or if the climate made her think that cheating may be a good idea at the time being.

Well, these brief encounters are all that we witness in his series. The show does follow their walks across the street leading to the therapist’s office, but we never get to see inside the closed door.

Coupled with sharp dialogues and witty arguments, ‘State of the Union’ takes place in the same set-up in each episode, but it never makes us claustrophobic. In the midst of their annoyance and irritation, you also see the couple being affectionate toward each other. In fact, it is amazing how the creators have managed to insert humor within such a crisis-packed situation. Moreover, the actors are so brilliant that once the show ends, you are left wishing for more. And during the entire run, we are left questioning if these two characters are finally able to save their sinking marriage.

State of the Union Season 2 Release Date: When will it premiere?

‘State of the Union’ season 1 premiered with its first episode on SundanceTV on Monday, May 6, 2019, at 10 PM. You can catch the show on the network’s streaming platform, Sundance Now, and its website, SundanceTV.com.

As far as the next season goes, we don’t have an official announcement yet. But Hornby does have plans for a sequel with the same microformat but with another couple. This is his effort to attract the current generation of viewers who have such waning attention spans. Seeing the stellar cast and smart direction of the current show, we would not be surprised if Hornby’s plans transform into reality soon. And if they do, our best guess is that if the show does get renewed, our best guess is that ‘State of the Union’ Season 2 shall release sometime in May 2020. We will update this section as soon as we hear more. So, do keep visiting this page regularly!

State of the Union Trailer:

Below is a short trailer of the show that gives you a glimpse into what the show is about. Both Rosamund Pike and Chris O’Dowd look in top form here.  But you can visit their official site to check out the latest clips and updates about ‘State of the Union’ season 1.