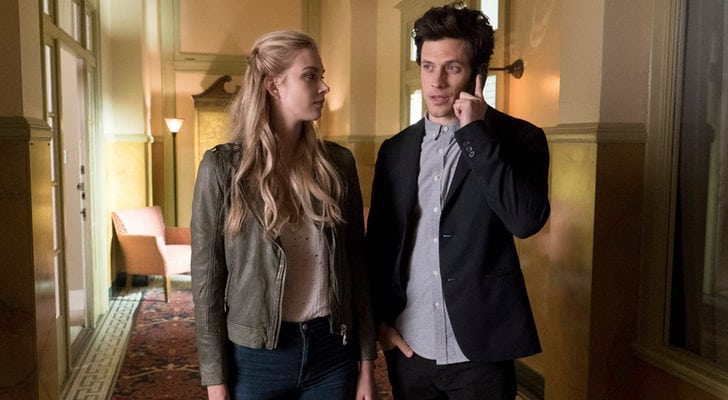 ‘Stitchers’ is an American sci-fi crime drama series that aired on Freeform, that was formerly known as ABC Family. The series debuted on June 2, 2015. ‘Stitchers’ has been created by Jeffrey Alan Schechter and Kurt Farquhar and was produced by David Roessell. Jeffrey Alan Schechter, Rob Wolken, Jonathan Baruch, John Myrick, Todd Holland, and John Ziffren served as the executive producers of the show. The series has been produced by StoryBy Productions, Freeform Original Productions and Like the Wind Productions.

Although the series garnered a loyal fan base who have even petitioned for the show to be renewed, critics were wary of praising ‘Stitchers’, calling it tonally inconsistent and confusing. Reportedly the show is neither fun nor compelling, although the premise of accessing the memories of the dead to solve murders would come across as something that might intrigue viewers.

‘Stitchers’ saw a total of three seasons and as of now its future looks uncertain. Here’s everything we know about whether we will see another season of the show.

Stitchers Cast: Who is in it?

The main cast of ‘Stitchers’ includes Emma Ishta portrayed as Kirsten Clark, a Caltech student recruited for a secret Stitchers plan, Ritesh Rajan, as Linus Ahluwalia, who is technical communication and bioelectrical engineer for the program, Kyle Harris as Cameron Goodkin, who is a neuroscientist and a part of the Stitchers program. His heart valve surgery made him meet Kristen. Other stars include Salli Richardson-Whitfield as Marguerite “Maggie” Baptiste, a leader of the Stitchers program and a former assassin of the CIA, Damon Dayoub as Detective Quincy Fisher, recruited for Stitchers program to act as a public face and an LAPD officer, Allison Scagliotti, as Camille Engelson, Kirsten’s roommate and a talented computer science graduate.

The recurring star cast includes Hugo Armstrong as Ed Clark, Kaylee Quinn as Young Kirsten Clark, Tiffany Hines as Marta Rodriguez, Oded Fehr as Leslie Turner, Ross Kurt Le in the role of Alex, Sola Bamis in the role of Dr. Ayo, and Thomas Howell as Daniel Stinger, among others.

While the cast of the show is certainly strong there have been complaints that the cast dynamic did not go too well for the show. In the eventuality that there is an upcoming season, we hope the cast of ‘Stitchers’ functions better on screen and the characters arcs are better built to make the series a more immersive experience.

Stitchers Plot: What it is about?

The plot of ‘Stitchers’ is mostly centered around Kirsten Clark as a Caltech student who has been recruited to join a secret agency. She possesses a special ability to get stitched into the minds of dead people to use their insights to investigate how they got murdered. Maggie Baptiste, the one, who leads this programme, tries to take advantage of this ability that Kirsten has where. Kirsten works with Cameron Goodkin who is a neuroscientist, passionate about the work that his team does. Some of the other members of the team are Linus Ahluwalia who is a communication technician and Kirsten’s room-partner, Camille Engelson, is a computer science graduate. The team can use stitching when things are smooth otherwise go into the grave along with the victims.

Getting to the bottom of unsolved murders by ‘stitching’ one’s mind to that of the victims sounds like a plot whose intrigue would help propel the series forward. Truth be told, despite the fact that ‘Stitchers’ was never a critical darling, the show did have its heart in the right place when it came to the plot. It showed that the NSA had uncovered the new technology that would allow the stitching of minds to those of dead people. However, the confusing nature of human memory meant that only clues could be retrieved rather than the direct identification of the perpetrator. ‘

Stitchers’ was careful to emphasize the mystical nature of the show, with Kristen even mentioning how she essentially spoke for the dead. All in all, the plot shows a fascinating mix of science fiction and police procedural. While this was just fine, they also threw in the young adult trope into the mix, which comes with its fair share of will-they-won’t-they relationships that make for a lot of on-screen sexual tension and often disrupts the plot. Perhaps, this is what earned ‘Stitchers’ the complaint of thematic incoherence.

The show also has several character arcs right like the founder of the program who truly cared about the members of the team. The writers too showed creative brilliance in certain episodes through deft handling of complex content and excellent usage of breaking the fourth wall. However, one shortcoming the show never overcame was its desire to resolve some of the more intriguing character flaws. Perhaps these flaws were a hindrance to the plot, but over the seasons, they were simply removed, changing the entire dynamics of the relationship between some of the core characters. It also made the characters a lot less relatable because the transitions were jarring and the audiences could not keep up with what transpired in their arcs.

While it seems pretty certain at this time that there will not be a future season to ‘Stitchers’, in the eventuality that the show does get picked up, one would hope that it focuses more on the interpersonal relationships of its core characters. The plot is fine just as it is, and perhaps we can see some more interesting memories and understand the fickle and confusing nature of memories itself. But the one department that ‘Stitchers’ severely lacked and must bring a rectification is making relatable character arcs, which is fundamental to the making of a successful young adult series. Moreover, if the characters become relatable, then the show almost writes itself, because the characters become more important than the actions and incidents that transpire around them.

Stitchers Season 4 Release Date: When will it premiere?

‘Stitchers’ Season 3 premiered on June 5, 2017. However, it seems best not to get the hopes up for the following season since, on September 15, 2017, the series was cancelled by Freeform, due to decline in its live and per day ratings. Variety reported that the series had slipped in the Live+Same Day ratings in Season 3, averaging a 0.13 rating in adults 18-49 and 365,000 viewers per episode, which made it one of lower rated originals on the network at that time.

We are hoping that the show does get a revival. For now, ‘Stitchers’ season 4 stands cancelled. Though, in an unlikely scenario of the show getting a renewal, the makers will need to address the issues with the show.

Check out the trailer for Season 3 to get a better idea of what the show is about.