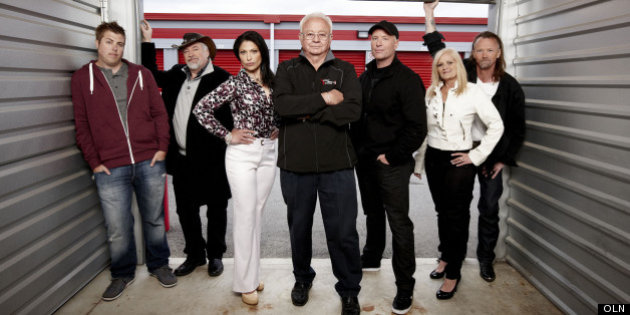 Storage Wars: Northern Treasures Season 3 Cast: Who is in it?

The cast of Storage Wars: Northern Treasures includes Roy Dirnbeck as “The Instigator”- He is the owner of a courier business. Roy has this hobby of buying storages. He often tends to spend a lot to win a locker at any cost, Cindy Hayden and Rick Coffill as “The Veterens”- Both of them own a store in Ontario called Storage Treasures. They have an experience of 15 years in the auction business. Cindy and Rick look for antiques to fill in their store. Bogart Kenny and Paul Kenny as “The High Roller and The Kid”- Paul has decided to make a business out of storage lockers with his son Begart with the help of a new store. Don Reinhart, Ursula Stolf as “The Knock out”- She sells luxurious items through her online store. She never fails to prove that she is a serious contender. Martin Yap is the narrator of the show.

Storage Wars: Northern Treasures Season 3 Plot: What is it about?

Storage Wars: Northern Treasures involves four teams of high stakes buyers who descend upon forgotten storage units. The individuals and teams hope to score big while monetizing on this modern treasure. The show includes a team of professional buyers who seek treasure and gems within the long-lost storage units. The treasure-seeking scavengers try bidding on unknown stuff which is abandoned in storage units.

Repossessed lockers are auctioned off at these places to the highest bidder. The bidders are not given much time to look into the stuff. They are just given a brief glimpse into what could be hidden there in these big sized garage rooms. It is upon the luck of the buyers to find valuable assets in these garage rooms or get a huge pile of useless junk in return. The main purpose is to earn more money by selling these findings than the money originally spent on getting the hold on these lockers in the first place. Surprisingly, many of these participating storage locker bidders are good at finding valuable stuff and making tons of money out of it.

The release date of Storage Wars: Northern Treasures Season 3 is not announced yet. There is no such update on the renewal of the show through any sources or by A&E network. Both season 1 and 2 of the show were released around the same time i.e. the late first quarter of 2017 and 2018 respectively. Season 3 will very likely follow suit and announce an air date around the same time. Stay tuned for updates.

Here is the official theatrical trailer for the series by A&E Network. Have a look and prep yourself to binge watch the show.