The Story of Brian De Palma: So Close Yet So Far to Greatness 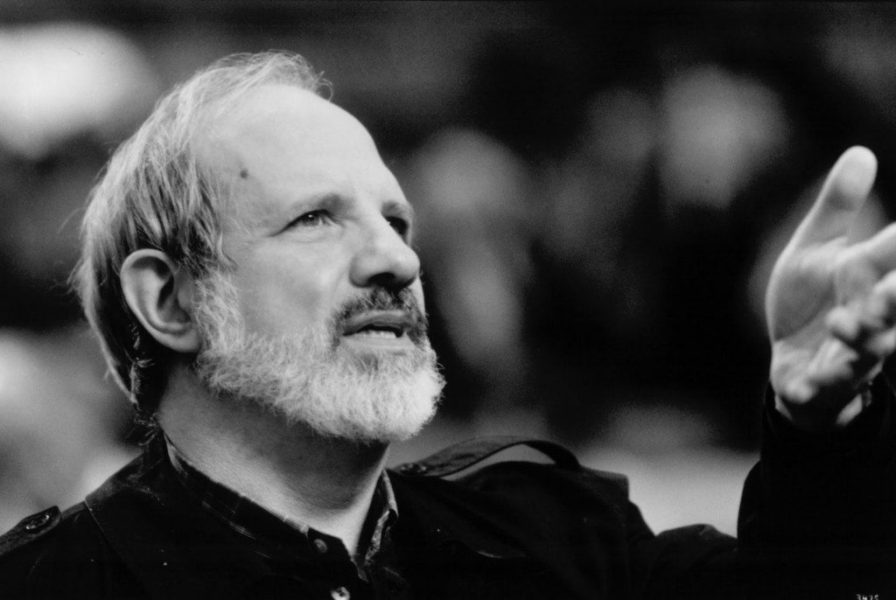 When Quentin Tarantino exploded onto the American forefront of directors, one of the men he paid homage too was Brian De Palma, citing Blow Out (1981) as one of his favorite films and John Travolta’s performance as one of the best in American cinema.

Palma was one of the beach house directors, a group of young men who gathered in the beach house of Margot Kidder and Jennifer Salt on weekends to talk about their projects, their dreams, and what they were doing. On the weekend you could walk into the cottage and see Francis Ford Coppola holding court to the younger men who held on his every word. Martin Scorsese would arrive with flowers for the women, dressed in a natty three-piece white suit, while George Lucas sat near Coppola, learning and listening. Off in the corner was shy Steven Spielberg, not quite ready to jump into the group just yet his ideas different from theirs.

And there was Brian De Palma.

Dark brooding, a ladies man, De Palma, like Coppola was already known to the studios and making films. He would break through in the late seventies, continue his career for the next forty years, but never enjoy the success of any of the other men he called his friends. Coppola of course would own the seventies, while Lucas and Spielberg introduced the world to blockbusters. Scorsese made equally dark films, remaining an outsider for a a long time, but able to make the films he wanted. 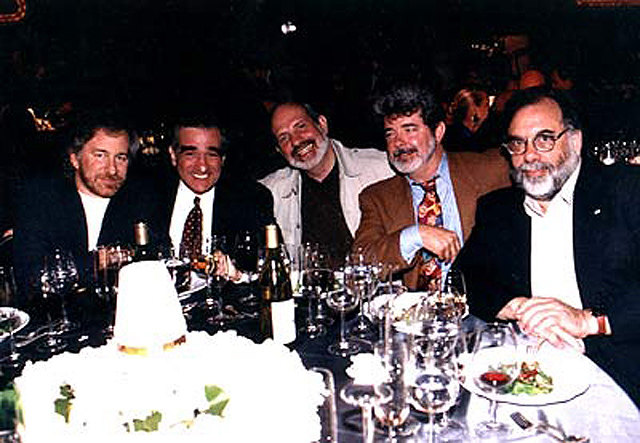 De Palma was gifted, no question, yet over the course of his rather extraordinary career, he has not been nominated for a single Academy Award, nor have one of his films been nominated for Best Picture, or Best Director, despite some rave reviews. Though he emerged in the seventies, the eighties represent his finest decade, when the films he was making caught the eye of critics, divided them, but displayed his genius. Spielberg had a great decade, so did Scorsese, while Coppola and Lucas sputtered and eventually died off, but De Palma kept working, turning out great films, some duds, but constantly staying true to his vision as a director.

In his early career he was often accused of copying Hitchcock, though I think his work provided homages to Hitchcock, and lets face it, all filmmakers copy, My God Tarantino has made a career of doing so.

His early work Phantom of the Paradise (1974) was a jaunty, pumped up energetic version of the Phantom of the Opera set in the world of rock and roll, and became a cult classic during the seventies. Though for years you did not run into many who had seen the film, today it is revered and remembered, the soundtrack one of the best original song scores in movies, and a wildly over the top, terrific entertainment.

Though he broke through with Carrie (1976), a fine adaptation of the Stephen King novel, for me his major breakthrough was Blow Out (1981) a brilliant thriller with John Travolta in his first adult role, displaying astounding talent as an actor, Brando great. Well reviewed the film was a summer release and stood no chance against Raiders of the Lost Ark (1981), Arthur (1981) or Superman II (1981). It died at the box office only to find a second life on video and home entertainment, where it too became a cult classic and is now regarded as one of the very best films of the eighties. Looking back it is all but criminal the film was not an Oscar nominee, for Film, Actor and Director at the very least.

Between Carrie (1976) and Blow Out (1981) he directed the superb Hitchcockian drama thriller Dressed to Kill (1980) a disturbing sexual thriller that found controversy for its explicit sex scenes and bloody murders. Michael Caine was outstanding as the creepy shrink who should be seeing one for himself, and Angie Dickinson, the object of his twisted fantasies was both heartbreaking and yet decidedly sexual. A hit with audiences, the film drew the ire of critics who accused De Palma of simply copying Hitchcock (could anyone do that easily…) which was simply silly, paying homage is not trying to be.

From there he was a dominant force in the eighties cinema with Scarface (1983), which though pummeled by critics of the day has also become a major work, the performance of Pacino now iconic, the roving cameras and pulsing score making the film a modern masterpiece. What he did with The Untouchables (1987) was astounding, turning a long TV series into a smashing entertainment, making a star of Kevin Costner, and allowing Robert De Niro to give a superb as Al Capone. Sleek, stylish and superbly entertaining, the film worked on every level, and De Palma was at the peak of his powers, able to do whatever he wanted. And what he wanted was to make his dream project, Casualties of war (1989) a true story of a young soldier in Viet Nam who refused to co-operate with his squad when they kidnapped a young girl and raped her for days before murdering her. The studios would not touch the film in the early eighties, but after Oliver Stone made Platoon (1986) and brought Viet Nam out of its comic book stage, Columbia wanted De Palma to make the film.

Pauline Kael, the venerable critic from The New Yorker was the first to declare the film a masterpiece, and she was right, yet again the studio failed the director releasing the film in the height of the blockbuster season. Open this movie in awards season and it is in the Oscar race, but in blockbuster season…not a chance. It is without question his darkest film, difficult to watch, but a powerful and very honest study of what really happened over there when young men became so drunk with power, and confused at what they were doing there.

Sean Penn is terrifying as Sgt. Meserve, while Michael J. Fox, the conscience of the film is equally good as a young man who refuses to rape the young girl, and turns his squad in for doing so. Forever haunted by her face, Fox brings to us the nightmare this young man suffered, knowing that what she went through was hundred times worse. Strong reviews greet ed the film, with Kael leading the way, but no one went to see it, not with Batman (1989), The Little Mermaid (1989), When Harry Met Sally… (1989) or Indiana Jones and the Last Crusade (1989) dominating the summer box office.

Armed with power like he had never known before (or would again) he was offered the chance to bring to the screen the eighties best seller, The Bonfire of the Vanities (1990), one of the most read books, and now one of the most anticipated films of the year. With Tom Hanks, his star on the rise cast as a Wall Street, Master of the Universe, and Bruce Willis as the reporter who seeks him out, the film seemed a bonfide hit…but it flopped, miserably, earning some of the worst reviews of his career, the picture was a miserable failure, setting back the career of Hanks (who recovered), impacting Willis, and most of all, nearly ruining De Palma. Watching today it is simply painful, yes it is that bad.

The nineties saw hits and misses, flashes of greatness yet huge his failures as well, the best and worst of De Palma. As his friends Scorsese and Spielberg were elevated to the status of directing Gods, he continued to hammer away making movies, some for him, some for the studios, some hits, at least one monster hit, and some failures.

Raising Caine (1992) was an interesting film with John Lithgow as a killer, a freaky little film that never found a wide audience, and might never have been suited for such. De Palma re-united with Al Pacino for the solid crime drama Carlitos Way (1993) which saw one of the stronger Pacino performances, and a show stopping performance from Sean Penn as a corrupt lawyer who has run afoul of the mob. While not a masterpiece, it was a rock solid picture and minor hit with audiences.

Mission: Impossible (1996) was HUGE…simply a monster of a hit that made Tom Cruise the top movie star in the world and allowed De Palma to once again find favor with the studios for directing a hit. He followed the hit with a dud, the wildly over the top, so much so it is grating, Snake Eyes (1998) with one of those Nicolas Cage performance that sees him wide-eyed, so far over the top he cannot pull back. The film had a great moving camera throughout, and the opening is startling, but it is not a good film, not even a fair film. 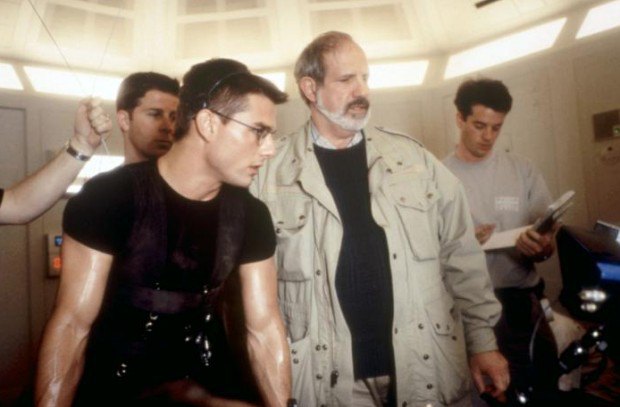 In the years since he has worked sporadically, taking time to attend major film festivals around the globe. He is a regular at TIFF and welcomes talking to audience members and press who recognize him. I once had the pleasure of speaking to him before a film, walking back to the hotel with him, and sitting in the coffee shop of the Four Seasons for ninety minutes talking film. What a treat for anyone let alone a hungry for De Palma film critic!

Mission to Mars (2000) was awful despite strong effects, while Femme Fatale (2002) had some wonderful cinematography and plot twists, but found no audience.

The Black Dahlia (2006) had some good things in it (art direction, cinematography, score), yet was so poorly cast and acted one might have though they were watching a handsome studio film with nothing else going for it.  Hilary Swank, just having won her second Oscar seemed to be in a different film altogether, and was the least sexual femme fatale I have ever seen. There was not a thing sexual about her performance and one wondered why the lead character would have any interest in her at all. Further she was supposed to be some dangerous sexual predator, yet there was nothing to suggest that in her terrible performance, made worse by the fact there was zero chemistry between she and her prey, Josh Hartnett. And she was by no means the worst performance in the film, for that we look to British stalwart Fiona Shaw, twitching and nutty from the first moment seeing her playing crazy like Gloria Swanson in Sunset Boulevard (1950) only on steroids and poorly.

How is it that one of the beach house boys, just one and one of the more talented could NOT find the same success as his friends, not even close. Consider that had Coppola not made another film after the seventies he still would have made one of the greatest directors of all time, Spielberg and his films speak for themselves, as does the work of Scorsese. Lucas was never a great director, not like De Palma, but found success as a pioneer of effects.

Here’s how I would rank De Palma’s best films: