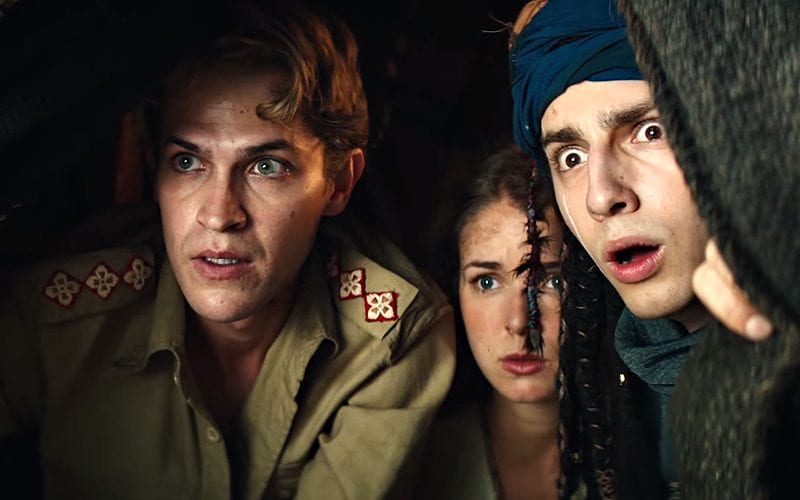 While it did not attain the cult status, or the huge impact on pop culture that ‘Star Wars’ merited in the last century (and continues to exert its influence even in 2018), none can deny that ‘Stargate’ was one of the pioneering franchises of modern high fantasy/science fiction as a genre staple of TV. This was in 1994, before the success of ‘Star Wars‘, ‘Star Trek‘, and ‘Doctor Who‘ spawned innumerable attempts and offshoots of the genre. Even though ‘Stargate’ is not as popular as the trio mentioned, it has its own dedicated fandom.

The sheer number of entries in media – both TV and Video Game adaptations – along with its huge merchandising scale attests how large the franchise has come to be.  Having landed two movies sequels, three successful TV shows, and an OVA run throughout the 2000s, ‘Stargate’ has recently returned in 2018 with its new spinoff entry titled ‘Stargate Origins’. The web series has the added bonus that it airs on Stargate Command, MGM’s custom-made exclusive digital platform for ‘Stargate’. The show first premiered on February 14, 2018.

The new series has been created by  Mark Ilvedson and Justin Michael Terry. This action, adventure sci-fi series is based on the 1994 film by Dean Devlin and Roland Emmerich, as well as, ‘Stargate SG-1’, the spin-off. It tells the tale of young Catherine Langford who embarks on a journey to unlock whatever lies beyond the Stargate so as to save the world from darkness. We are given a peek into the adventures she has while trying to unravel this mystery. The series naturally has a dedicated fan base among those who love the franchise, and critics too have praised the show saying that newcomers might find it interesting, but hardcore fans of the franchise are bound to find it paler in comparison to ‘Stargate SG-1’.

Stargate Origins Cast: Who is in it?

On the projected upcoming season, if and when its renewal is confirmed, fans of ‘Stargate Origins’ should expect to see the ensemble cast return with the respective actors, as well as more character additions from the ‘Stargate’ universe. Provided that the producers decide to continue exploring the movie-SG1 canon as a pure prequel, like the first season, in which case we can see (spoilers ahead) Connor Trinneer as Professor Langford, Ellie Gail as Catherine, Philip Alexander as Captain Beal, and Daniel Rashid as Kasuf. Aset and her child die in the temple at the finale of the last season, so a return for Salome Azizi is unlikely.

One of the fan favorites for the upcoming season is Master Bra’tac, played by Tony Amendola in ‘Stargate SG-1’. He is a seasoned warrior and elder statesman and has a rich backstory that could be explored in this upcoming season. There are several other directions that the show could head in since the universe itself is sprawling and rife with options.

Stargate Origins Plot: What is it about?

‘Stargate Origins’ primarily aims to be a prequel setting up the board and tying into the movie and SG-1 canon. It follows Catherine Langford and her adventures before the events of 1945 in ten 10-minute episodes that resemble a feature-length film when assembled (as a matter of fact, there has been a remixed movie release on June 19th, 2018). The writers had faced a challenge with the fact that Catherine does not appear to have experienced stargate travel as of SG-1, but this is resolved by a memory wipe for Catherine and her entourage near the end of ‘Stargate Origins’. This memory wipe ending ensures the events set in motion follow the canon recorded history of the main trilogy and the previous TV shows. Prequel spinoffs such as these are not known for its extension towards multiple seasons, especially since all loose ends were tied up with the memory wipe. The show receptions were mostly mixed and mediocre rather than promising.

The thing that is immediately evident in the show is that the plot is simple, a lot of the acting is wooden, and the humor seems to be awkwardly placed. While we mentioned that newcomers might like the show, it seems self-defeating to restrict access severely by limiting the show to a dedicated ‘Stargate’ platform. It feels like a move that aims at the existing fan base, but unfortunately, the existing fans are bound to find this series bland. The series does have nice pacing when it comes to plots and the CGI is an absolute saving grace, which uplifts most of the show and makes it bearable. However, when all this is put into perspective of ‘Stargate SG-1’, this series simply cannot keep up.

Even so, MGM seems to have a clean slate for the future of the franchise as far as TV and web series are concerned, and the possibility of a second season can be entertained solely for that reason. The contents of it will depend wholly on which direction MGM wants to steer the franchise. Since the fan reception was quite underwhelming for the first season, it is entirely possible that they will explore the origins of a different major ‘Stargate’ character, or even go the multiverse path to depict the Langfords in an alternate timeline altogether. If they continue the canon, it may follow the journey of the core characters further – such as Kasuf’s rise as a leader of his people in the city of Nagada, or a better perspective into Professor Langford’s research finally leading to the 1945 revelations.

Stargate Origins Season 2 Release Date: When will it premiere?

While we wait for new on ‘Stargate Origins’ Season 2, you can check out the trailer for Season 1 below.