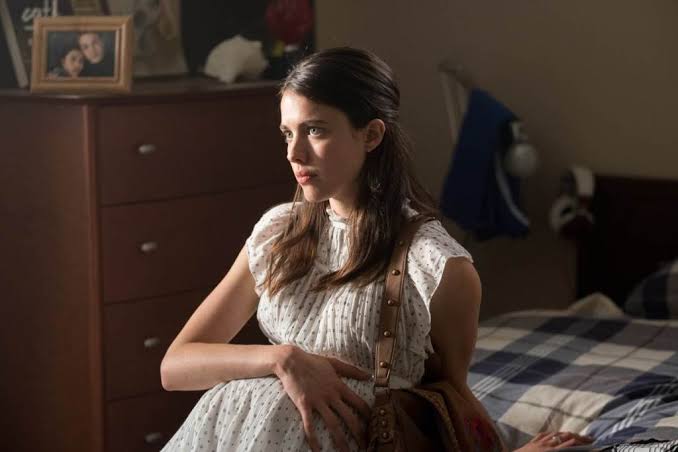 ‘Strange But True’ is genre-bending cinema that seems to oscillate between supernatural thriller and neo-noir fiction. Directed by Rowan Athale and adapted from an eponymous novel from John Searles, it tells the story of Melissa Moody, a young girl who gets pregnant under mysterious circumstances. Starring the ever-delightful Margaret Qualley, Nick Robinson, Amy Ryan and Greg Kinnear in pivotal roles, ‘Strange But True’ makes for an eerie, yet thoughtful watch. SPOILERS AHEAD.

The movie begins with a heavily pregnant Melissa turning up unannounced at the doorstep of her late boyfriend Ronnie’s house. She is greeted, somewhat hesitantly, by Ronnie’s brother, Phillip Chase, and mother, Charlene Chase. There is unresolved tension between the three, on part of Ronnie’s tragic death on the night of a prom party he attended with Melissa, over five years back. The tension intensifies when Melissa proceeds to drop a bomb on the Chases: she believes the father of her child to be Ronnie. Melissa reveals to the Chases that she has only ever been with one man her whole life: Ronnie. Charlene and Phillip, are perturbed, to say the least.

Over the course of the film, Melissa, Charlene, and Phillip attempt to unravel the mystery of Melissa’s baby, in the process uncovering several others. Charlene learns that her ex-husband, Richard, has been paying for Melissa’s accommodation. Phillip learns that Melissa has previously shown a keen interest in reincarnation and communicating with spirits. Melissa learns that Phillip has long-since felt lost and aimless after the death of his brother. The film culminates in yet another startling discovery the Chases make about Melissa’s adoptive parents, Bill and Gail.

Throughout, the movie is interspersed with poignant flashbacks of that fateful prom night. We see each of the characters’ past joy through the lens of their present trauma. The technique works beautifully and director Athale achieves his desired effect of stinging melancholia.

Who is the father of Melissa’s baby?

When stripped of its cheap thrills, ‘Strange But True’ also shows its feminist undertones. Right from the get-go, Melissa emerges as an easy scapegoat. The characters, at first, treat her with suspicion and incredulity. Athale depicts how easily women’s personal narratives can skew opinion and cause bias. There are no perfect victims, and Melissa is certainly not one of them. Her complicated past makes it easy and convenient for other characters to cast aspersions on her character and motives.

After her parents distanced themselves from her, Melissa found solace in whom she considered to be a caring and nurturing couple, Bill and Gail. But Bill had ulterior motives at play. After lacing her drinks with common ‘date-rape’ drug, Rohypnol, Bill would sexually assault her while she remained unconscious. Under the influence of the drug, Melissa remained completely unaware of the assault. When Bill realized that Melissa’s baby was his, he did his best to keep the shocking secret under wraps. However, his plans are foiled when Gail happens upon his secret stash of Rohypnol and confronts him about it. The two come to blows with each other, which results in Bill pushing Gail down a set of stairs and killing her instantly. Phillip discovers Gail’s body and is taken hostage by Bill.

What becomes of the Chase family?

The weight of loss looms large over each of the characters in the movie, and over Phillip and Charlene more so than the others. Both mother and son are perennially living in the past, unable to reckon with the present and confront the future. At one point, Phillip reveals to Melissa that his injured leg is far from the result of a simple bike accident. Struggling to get by on his own in fast-paced New York, Phillip longs for the companionship of his brother. When the opportunity to give up on life in New York presents itself in the form of a zooming car headed in his direction, Phillip takes it. However, Melissa’s predicament and the ensuing events change Phillip’s outlook towards life.

Instead of giving up and accepting defeat in the face of Bill’s menacing actions, Phillip does the opposite. With all the strength he can muster, he attempts to overpower Bill and escape his clutches. Phillip’s renewed hope for life at the end of the movie remains in stark contrast to his despondent, nihilistic self at the beginning. Athale gives shape to Phillip’s character arc beautifully and commendably.

Charlene, too, starts off on an embittered, resentful foot. The loss of her youngest son has created in her a defense mechanism of unfiltered sarcasm and barely disguised repulsion. But over the course of the film, she begins to tear down her defenses piece by piece, culminating in her accepting and lovingly caring for Melissa’s child.

The Ending: Is Bill dead?

Throughout the movie, Bill’s character is somewhat of an enigma, albeit a sociopathic one. We know only that he, too, carries with him the loss of the child he never had. When Bill and Gail attempted to bring a child into the world in their heyday, they learned that Gail would never be able to conceive. This has, perhaps, been a determinant of the person he goes on to become.

Bill’s story ends with the movie. The movie wouldn’t live up to its thriller genre if it didn’t offer us the quintessential climax full of suspense and dread. As Bill levels his shotgun at Phillip, Charlene, beside herself at the thought of losing another child, dives in front of him. We hear a foreboding shot go off into the night, as the screen fades.

Athale attempts to deftly trick the viewer into believing Charlene to be dead. However, reality tells a different tale. Not unlike the other characters, Bill, too, experiences grief and shame, at the thought of killing his wife of 30 years. Driven by his own profound sense of loss and guilt, Bill turns the gun on himself.

‘Strange But True’ partially lives up to its name: it is indeed quite strange. While the movie is aesthetically shot and wonderfully acted out, it tries and fails, to disguise a simple, universal subject as a more complex and niche one. It fills in unnecessary blanks with one too many red herrings, which subtracts rather adds to the movie’s delicate plot.

But once you cut the storytelling flab, the movie fittingly mediates on some of the simplest and purest aspects of life and death, and the past and present. Athale and Searles ask us to let go of the inhibitions that bind us to our pasts. ‘Strange But True’ compels us to look beyond the past, but before the future. It asks us to live large in the present.