There are some movies so polarising in nature that one section of the audience absolutely reveres it, while the other can’t help but despise it. Zack Snyder’s movies often have such an effect, most notable of them being ‘Sucker Punch’. On its release, the film was dismissed by critics as a cheap shot at creating comic book sort of story that doesn’t do any favors to its female characters. On the other hand, a legion of fans hailed it as one of his best works in which he delves deep into topics like trauma, abuse, oppression, rebellion, and the idea of freedom. If you are confused about what the movie means, especially its ending, then here’s something to make things easier for you. If you haven’t seen the film yet, come back to this article later. SPOILERS AHEAD

A young girl is tormented by her stepfather who tries to sexually abuse her after her mother dies. When she doesn’t yield to him, he targets her younger sister. In trying to save her, the girl accidentally kills her, following which, her stepfather throws her into an asylum. Five days later, she is lobotomized, but just before the process takes place, she jumps into a fantasy where the people in the asylum take different roles; where she leaves behind the helpless girl and turns into a fighter.

Every story is defined by its protagonist. Who are we following? Who is at the center of it all? The switching of the hero of the story from one character to another can make all the difference, and the same happens in ‘Sucker Punch’. We start watching the film with the idea that it is Baby Doll’s story. We follow her life, her trauma, and her imaginations. She is the one who enters as a point of conflict in the story, uprooting the system of the asylum by instigating others to take part in her plan of freedom. She is front and center throughout the film, and hence, it only makes sense that it is her story.

Whose story is it? 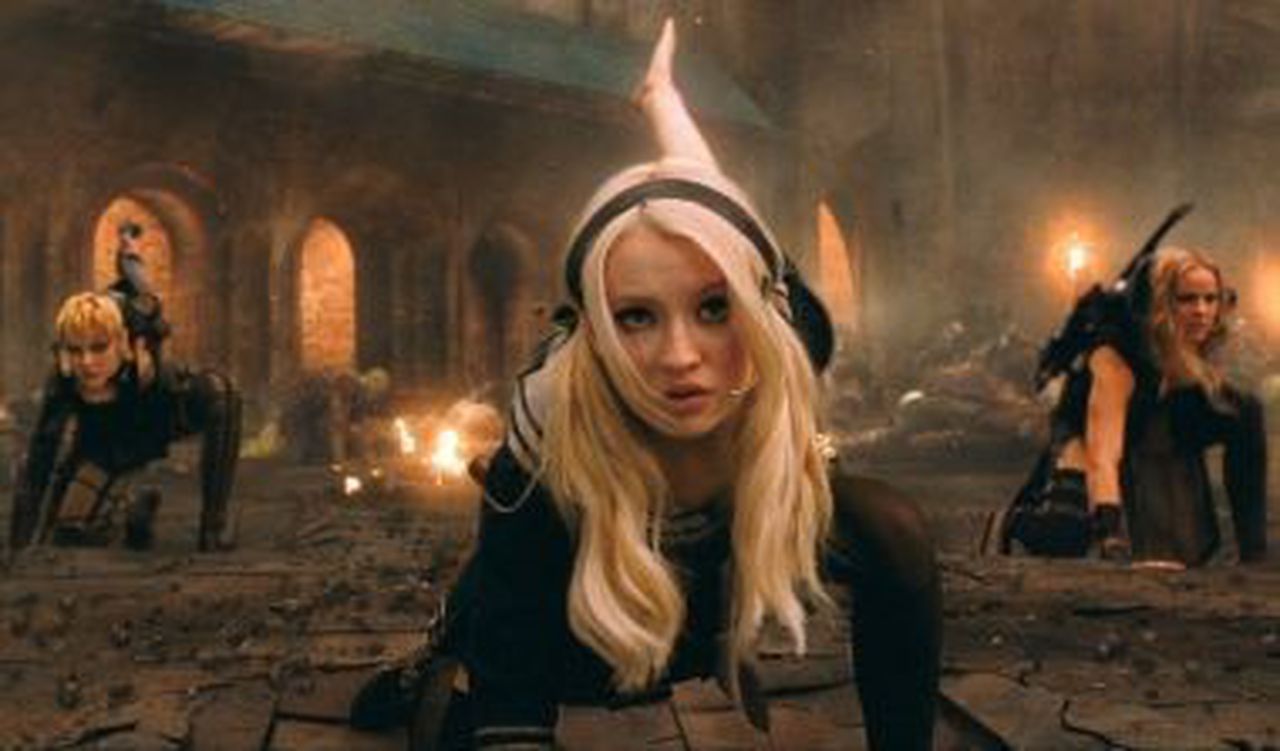 The film asks us to completely abandon the previously formed ideas when, at the end, Baby Doll realizes that she is the final thing needed to make an escape. She is the final sacrifice, and in doing so, she accepts that it is, in fact, Sweet Pea’s story. It had always been about her escape, rather than Baby Doll’s. And this is where a complete perspective shift takes place in the story. One line of thought would be to take this revelation in your stride, and be fine with the fact that Baby Doll sacrificed herself to help Sweet Pea escape into the real world; there’s nothing more to it. However, for a twist like this, there must be a reason.

Why did Snyder suddenly decide to shift the reins from the character we had been following all along to the one who had been skeptical about escaping in the first place? Maybe, he didn’t. The film doesn’t really begin with Baby Doll. Before we see her, we come in contact with a narrator who talks about guardian angels. This narrator, as it turns out at the end of the film, is Sweet Pea. She had been established as the protagonist of the story, right at the beginning. So, one could say that Baby Doll was Sweet Pea’s guardian angel and her purpose was to help her escape, not escape herself.

Does that mean it was never Baby Doll’s story at all? Not entirely. It depends on how separately you see her from Sweet Pea. If you think of them as two different characters, then sure, one takes precedence over the other. But take some time to really think about it and you realize that both of them might actually have been the same person, which can be proved from the voiceover segments at the beginning and the end of the film.

As the camera comes in closer to reveal Baby Doll to us, from where the events of the film start to unfold, the narrator talks about a guardian angel who can come in any form. At the end of the film, when Sweet Pea gets on the bus to escape, the narrator tells us that the one person who can change our life is not anyone on the outside but ourselves. This would imply that Baby Doll isn’t really Sweet Pea’s guardian angel; she is not someone on the outside. Rather, they are the same person. In the same vein, one could also argue that the other girls are also the manifestations of Sweet Pea’s persona.

Rocket is the younger sister she feels responsible for and who dies because of her. She is also the representation of the rebellious side which she tries to suppress all the time. Blondie is her scared, unsure version who tries to be liked by all but struggles internally. Amber is the cool-headed part, who might not be the leader you need, but who delivers whenever she is needed. And Baby Doll is the version who is closest to her because she represents her trauma as well as her fighting spirit.

Now that we have an inkling of who the story was actually about, the meaning of the ending also changes considerably. If Baby Doll and Sweet Pea are the same people, was there any escape in the first place? Yes, there has been an escape, there is no question about that. The point where one can choose to differ is the nature of the escape. On the surface, it looks like Sweet Pea physically runs away from the asylum. However, a deeper understanding reveals that her escape has been to another fantasy world.

The word “paradise” appears repeatedly in the film. Blue tells Baby Doll’s stepfather that she will be in paradise after her lobotomy. When Baby Doll tells the girls about her escape plan, Sweet Pea tells her to send postcards from paradise. In the end, as the bus drives off into the sunset, we see the billboard of Paradise Diner on the side of the road. So, if Sweet Pea is running off into paradise, it is very much inside her head rather than the outside world.

What has happened to her is that she has been lobotomized, which means her mind has receded into herself and the outside world can’t touch her anymore. In the escape plan, each of the girls represented a side of her that she wouldn’t need once she would escape all her troubles, which is why Baby Doll was the final sacrifice. In this way, she was a representation of Sweet Pea’s body, which had always been at the receiving end of all the men’s desires. Assaulted by her father, then by Blue, she served as their fantasy of an innocent school-girl with sex appeal, and both of them wanted her for themselves. She couldn’t physically get away from them, but she could do so mentally. 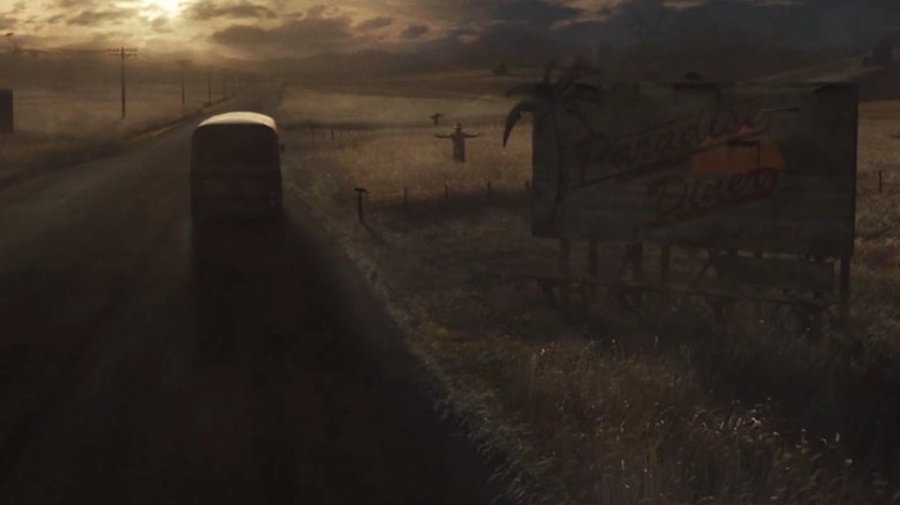 When she left behind her body, whatever happened to it didn’t matter to her anymore. She was untouchable now. The fact that the final scene of boarding the bus takes place insider her head can also be proved by two people who appear in it. First, there is the bus driver, who appears just in Baby Doll’s fantasies and is the one good man in the entire film. It would make sense that she would be led into paradise by the same figure who inspired her to break out of her hell in the first place.

Another sign is the boy who boards just before her. He was also present in the World War I fantasy, where Sweet Pea takes note of him. He is the only other innocent male in the entire film, and if she was going away to paradise, it would make sense that he would too.