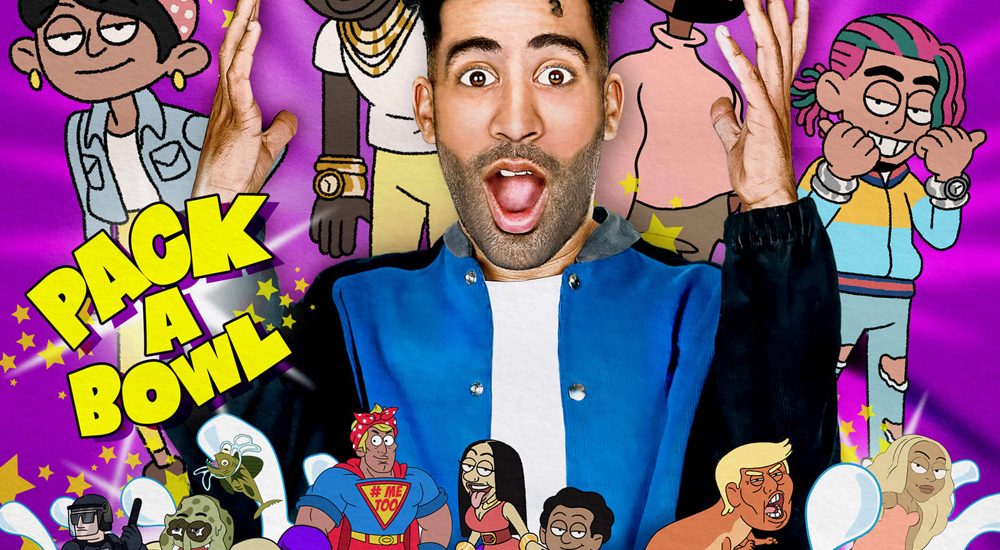 Fuse is well-known for serving up the best cartoons on Saturday mornings, as kids get ready with their morning bowls of cereal. Recently in a not-so-innocent twist to their regular slate of children-friendly shows, the channel decided to make its mark in adult animation as well.

‘Sugar and Toys’ is the network’s first foray into animation aimed for grown-ups and is packed with adult comedy, social commentary, and parody of popular music culture. Exploring trends and issues that mostly affect the millennial generation, the show is produced by Carl Jones and Brian Ash. Comprising 10 episodes, the series first premiered on Fuse TV on June 9, 2019 as part of the platform’s late-night programming block.

Sugar and Toys Cast: Who is in it?

‘Sugar and Toys’ is hosted by rapper, songwriter, and actor Kyle or Kyle Harvey, whose name became a global phenomenon after the release of his single ‘iSpy’. He was named as “one of the ten artists you need to know” in the 2015 edition of Rolling Stone. He marked his entry in acting by appearing in the Netflix original film, ‘The After Party’. He has released several hit singles, tracks, and albums and is a multi-platinum rapper.

Sugar and Toys Plot: What is it about?

‘Sugar and Toys’ is primarily aimed toward the young-adult audience and airs on the late-night programming block of Fuse on Sundays. It brings together live-action and animated segments, blending them in a myriad of unique styles, which include comedy, social commentary, and hip-hop culture. Bathed in the brightest shades of candy colors and rib-cracking comedy, it adds a guilty twist to the innocent world of cartoons. Mock toy commercials, parodies of prominent public figures, and PSA spoofs are some of the elements introduced throughout the narration. As the episodes unravel, you can see a LEGO figurine of Donald Glover, an animated Cardi B, Tupac’s holographic edition, and Kanye West wearing a MAGA hat.

‘Sugar and Toys’ is basically the narration of adult themes and cultural stuff with a hint of humor. Not only is it appealing for the current youth but it also explores more classical subjects. It tries to highlight the sh*t that we call entertainment and the mess that we call cultural progress.

As per J-T Ladt, Fuse Media’s chief content officer, “Our platforms are fast becoming destinations for hard-to-reach, young viewers that demand content that takes a stand by tapping into their passions and values through the musicians and influencers we feature in our series”. He added that his team is excited to create an impact via provocative animation, which can actually have a strong effect over the millennial generation. Therefore, if you are a fan of other sketch comedy shows like ‘Robot Chicken’, this combination of a “decent amount of social commentary, f*ckery, and satire” shall surely appeal to you. Ramped-up and fast-paced, it is a must-watch for the millennial populace.

Sugar and Toys Season 2 Release Date: When will it premiere?

‘Sugar and Toys’ Season 1 premiered on Fuse on June 9, 2019. The total run comprised of 10 episodes, with a duration of 30 minutes each. Carl Jones and Brian Ash are the geniuses behind critically acclaimed animated shows such as ‘The Boondocks’ and the cartoon counterpart of the cult classic, ‘Black Dynamite’.  ‘Sugar and Toys’ may not be their best work, but it is still an enjoyable watch. The show also embraces a bit of the format followed in most of the popular Nickelodeon shows in that it delves into socially relevant topics.

Now to the question that we all are thinking about: Will ‘Sugar and Toys’ get renewed? Since the show is an absolutely fresh concept and is unique in its premise, we would not be surprised if it, in fact, gets another season pretty soon. If all things fall in place, expect ‘Sugar and Toys’ Season 2 to premiere sometime during the summer of next year, i.e June 2020. However, it might even land on an earlier date. Its visual styles are not that complicated, particularly as compared to ‘Black Dynamite’ and ‘Boondocks’ (which, according to the creators, took almost two years or more to produce each season). In fact, season 1 got green-lit in October 2018 and started airing in June 2019. That’s even less than a year! Therefore, if you are lucky enough, you might see a season 2 sooner than you expect.

However, Fuse has not made any official announcement yet. We will update this section as soon as we learn more.

While we wait for an update on season 2, check out the season 1 trailer below.. Additionally, you can head to their official site if you wish to catch up on all the previous episodes of the series.