Superman Red Son: Everything We Know 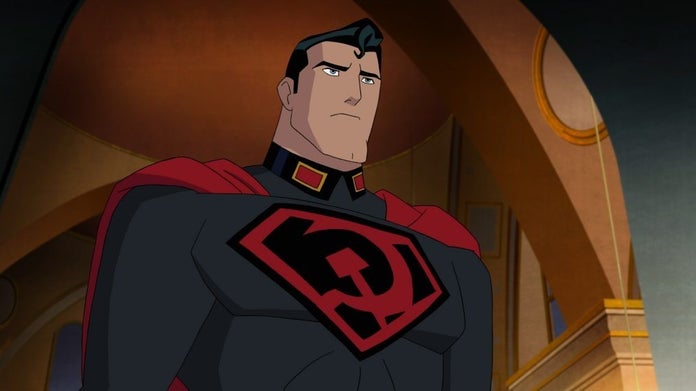 Superman is the perfect superhero. But that also makes him slightly boring in my opinion as he hardly faces insurmountable odds. However, the upcoming animated movie, ‘Superman: Red Son’ transports the character to an alternate universe where he is depicted to be a Soviet superhero.

Such a uniquely speculative setting brims with the possibility of an engaging plot coupled with nuanced socio-political commentary as superhero stories have been known for doing. Continue reading to find out more details about the forthcoming project.

Superman: Red Son Plot: What is it About?

‘Superman: Red Son’ is based on a comic book miniseries published by DC Comics, under the series, ‘Elseworlds.’ The story is an alternate version of the superhero, Superman. This means that the story posits a different journey for the character than the one that is traditionally followed and exists in a fictional, alternate reality where events of the “normal” Superman story do not coincide. However, it is set against the backdrop of actual history and features some real political figures in a parallel setting.

The basic speculative question that it asks is “What if Superman was raised in the Soviet Union?” The story follows Superman’s rocket ship landing in Ukraine rather than the United States of America. While details about his secret, human life like the name given by his adoptive parents is guarded as a state secret, the superhero is regarded as “the Champion of the common worker who fights a never-ending battle for Stalin, socialism, and the international expansion of the Warsaw Pact.”

When the United States government discovers that the USSR has a powerful superhero working under their control, it shifts its focus from the arms race to that revolving around superhumans. Lex Luthor, a scientist is hired to destroy Superman. To do so, he creates a monstrous clone of Superman and names him Superman 2. Meanwhile, Wonder Woman finds herself falling in love for Superman after meeting him at a diplomatic party.

Superman: Red Son Cast: Who is in it?

The role of the Soviet Superman, also known as Kal-El is voiced by the British actor, Jason Isaacs. He is best known for playing the character of Lucius Malfoy in the ‘Harry Potter’ franchise. Moreover, he played Colonel Tavington in ‘The Patriot’ and Georgy Zhukov in ‘The Death of Stalin.’ He also stars in the television series, ‘The OA.’ More recently, he also appeared in the movie, ‘Hotel Mumbai.’ He is not new to voice acting and has voiced the character of the Grand Inquisitor in ‘Star Wars Rebels’ and Admiral Zhao in ‘Avatar: The Last Airbender.’

The American actress, Amy Acker lends her voice to the character of Wonder Woman in this alternate reality fiction. She gained prominence after appearing in the drama series, ‘Angel.’ Moreover, she also plays Kelly on ‘Alias’ and Root on ‘Person of Interest.’ She became a part of Marvel’s Cinematic Universe after playing Caitlin Strucker in the superhero show, ‘The Gifted.’ With ‘Superman: Red Son,’ Acker will spread her cape to the DC universe as well.

Furthermore, the antagonist, Lex Luthor is voiced by Diedrich Bader. He has acted and lent his voice to multiple projects throughout his career. Some of the movies that he has acted in include ‘EuroTrip’ and ‘Napoleon Dynamite,’ He has voiced the DC character, Batman in ‘Batman: The Brave and the Bold.’ Some of his other voice roles include Zeta in ‘The Zeta Project,’ Warp Darkmatter in ‘Buzz Lightyear of Star Command.’ Moreover, he also voices a recurring character on the animated show, ‘The Grim Adventures of Billy and Mandy.’

The prolific voice artist, Philip LaMarr will be heard as John Stewart or Green Lantern. He has lent his voice to projects such as ‘Futurama,’ ‘Samurai Jack,’ ‘Mortal Kombat’ and ‘Metal Gear.’

The character of Batman, on the other hand is voiced by Roger Craig Smith. Smith is best known for voicing Sonic in the series, ‘Sonic the Hedgehog,’ Captain America in several projects and Deidara in ‘Naruto: Shippuden.’ The actor has voiced the character of Batman before, in the game, ‘Batman: Arkham Origins.’

Superman: Red Son Crew: Who is Behind it?

The movie is directed by Sam Liu. He is an animation director who has helmed animated projects for both Marvel and DC. He worked on ‘The Batman’ series, winning a Daytime Emmy Award for the same apart from several Marvel animated features like ‘Planet Hulk.’ He has worked extensively on a large number of projects and proves to be extremely suitable for this role.

Moreover, the movie’s screenplay is penned by J.M. DeMatteis based on a story by Mark Millar. Frederik Wiedmann has composed the movie’s music score while Wes Gleason serves as the voice director.

Superman: Red Son Release Date: When Does it Premiere?

You can watch the trailer for ‘Superman: Red Snow’ below: It does a decent job at highlighting the movie’s premise, which in itself is fascinating. We cannot wait to watch a Soviet Superman and how the story advances its inventive set up.