Superstore S5 E13: Everything We Know 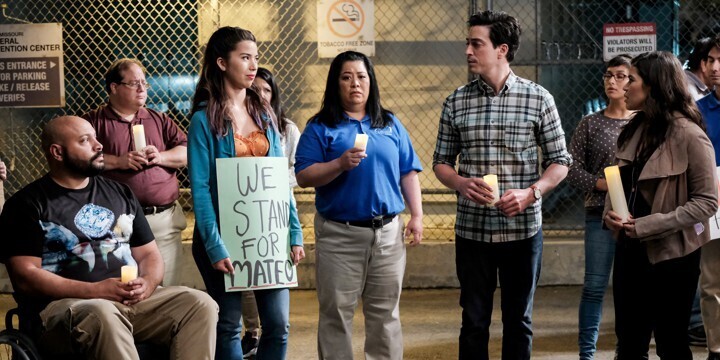 ‘Superstore’ is a situational comedy that follows the lives of several employees, who work at a mega store, Cloud 9. The show also depicts the inter-personal relationships between the team as they go through various curve-balls, training sessions, and other professional developments, as one united family.

‘Superstore’ season 5 premiered on September 26, 2019. The show recently got back from a seasonal break on January 9, 2020, with episode 11. Titled ‘Lady Boss,’ the episode showcases the aftermath of the sudden acquisition of their company, Cloud 9. It sees major positional changes as Glenn assumes the post of the floor supervisor after stepping down from the post of a manager. This paves the way for Amy, as she gets to be the manager and Dina, an assistant manager. The episode also highlights the issue of gender parity.

You must be wondering about what goes down in the latest episode, and we are here to help you with that. However, first, let us walk you through when and where to watch the upcoming episode of Superstore. As an added bonus, we will also give you a quick recap on episode 12.

Superstore Season 5 Episode 13 Release Date: When Will It Premiere?

The upcoming episode has been titled ‘Favoritism.’

In episode 13, Amy tries to recruit Mateo as her new assistant, which sparks a controversy with Amy in the center as people accuse her of of favoritism. On the other hand, Sandra feels trapped between Glenn and Dina. Meanwhile, the goofy Jonah tries really hard to prove to Garett that he has still got it.

You can watch the ‘Superstore’ season 5 episode 13 by tuning to NBC at the above mentioned time. You can also catch the show on NBC’s official website and also on the NBC app.

If you don’t have a cable subscription, you can watch the show on Hulu, Direct TV, and Fubo TV. ‘Superstore’ is also available as a VOD service on YouTube TV. You can also purchase the episodes on Amazon Prime.

It pays tribute to late actor Linda Porter who passed away on September 27, 2019.

Honoring the legacy of the character and actor, who used to appear as the loving and cheerful co-worker Myrtle, the episode rips you apart but also hugs you in the end. It showcases the employees’ mental state as they strive to cope with the loss of Myrtle, who has given them so much to remember. As a surprise to everyone, Jonah learns that Myrtle has left a large sum of money in his name, who could actually use the money to clear his student loan. But we know he wouldn’t.

A shocked Garrett and Amy, have an interesting conversation, regarding the same.

Garett exclaims, “There’s a thousand bucks in it. I already opened it.” To which Amy responds, “What? For Jonah? Were you guys even close?” Glenn chimes in, saying, “She never mentioned that when I made her tea every morning or when I took her to her doctor’s appointments.” Well, okay.

Meanwhile, assistant manager Dina’s estranged father Mr. Howard Fox pays her a visit, ruffling old feathers but also showing us a vulnerable side of the feisty Dina. The episode smartly sets the stage for Amy and Jonah’s marriage proposal.