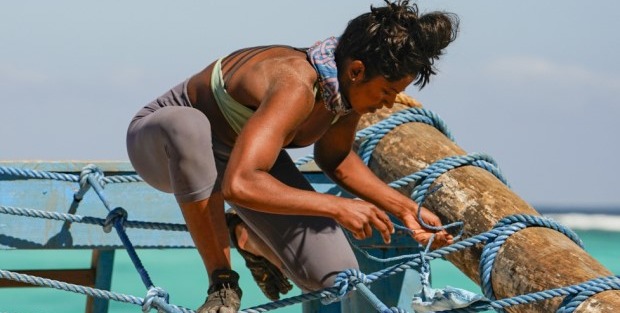 The competition is growing fiercer on ‘Survivor.’ Last week’s episode sees Camp Sele losing to Camps Yara and Dakal. There is a heated tribal council, with each member trying to strengthen alliances. However, many agree that Yul is too dangerous, and the old-school player is voted out.

He gives his tokens to Sarah and Sophie. Now, with the merge on the horizon, you might be wondering about what transpires in the latest episode. We are here to give you the complete rundown while walking you through when and where to watch the upcoming episode.

‘Survivor’ Season 40 Episode 9 is slated to be released on Wednesday, April 8, 2020, at 8/7c. The upcoming episode is titled “War is Not Pretty,” and is bound to see the uglier side of the competitive nature that each participant brings to the table.

Players on the Edge of Extinction, receive a scroll, that tells them how to spend the fire tokens. Amber gives her tokens to Rob so that he can buy an advantage as well as an idol. Natalie uses her tokens to strike the same deal. For the players who are still in the competition, it is time to merge.

However, the action is focused on those who are on the edge of extinction. The formerly ousted players have to go through a challenge, for a chance to return to the game. They have to race through a series of obstacles, ending in a puzzle where they have to balance a ball on a narrow track.

Tyson manages to finish the challenge first, merely seconds before Rob. Meanwhile, Sele beach is now home to the merged tribe. There are 12 members here, and Denise proceeds to put a target on her back by describing how Sandra was voted out. The immunity challenge in this episode requires the tribe members to be the last man and woman, to hang on from a totem pole.

Among the women, Denise wins, gaining a fire token for herself. Jeremy is the male victor and gets his fire token. Back at camp, schemes are immediately put into place to break up Nick and Wendell’s alliance. Many are biased against Nick. However, when the votes come in, it turns out that Wendell is the one who gets eliminated.

Naturally, this puts Nick on the warpath, but he has a target on his own back as well. On his way out, Wendell gives one of his fire tokens to Nick, and the other one to Michele. Now, with Jeremy having made a big move, it remains to be seen what the repercussions are, in the upcoming episode.