Who is Swan on ‘The Masked Singer’? Clues and Guesses 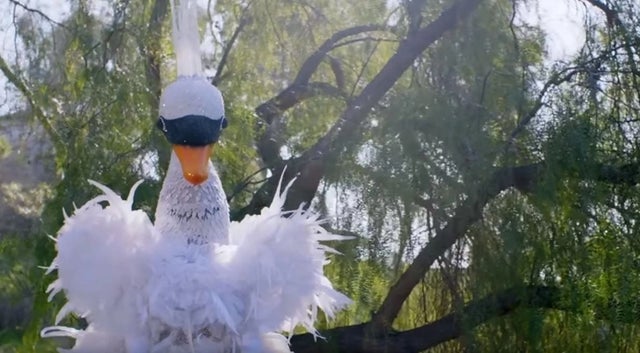 ‘The Masked Singer‘ Season 3 is well underway, and currently, we have the pleasure of watching Group C perform. The participants have provided us with intriguing clue packages, energetic performances, and amazing outfits. One performer who’s stood out, when it comes to all three, is Swan.

With a rather ominous toned clue package and a fabulous performance, Swan has everybody guessing as to who might be wearing the outfit. Curious about Swan’s identity? Look no further. We have all the clues and guesses right here.

Swan gives us a fascinating clue package, where we understand that the performer can rhyme. We hear Swan say, “I’ve played games. I’ve lived fame. I’ve seen shame. And I claim, on this stage where I came, that you won’t know my name.” As Swan performs ballet moves, we see one of the security guards, putting on vampire fangs.

The clue package also includes ominous music, as we see a ghost. Swan performs “Fever” by Peggy Lee. You can take a look at the clue package below, to see if anything jumps out at you.

One of the popular guesses surrounding Swan’s identity seems to be that Evan Rachel Wood is wearing the outfit. The Golden Globe-nominated actress appeared in ‘Across the Universe’, which fans believe is linked to Swan’s clue about being “one of the only birds who flies despite the burden of the weight they carry across the universe.”

She is trained in dance and is a singer. Moreover, Wood appeared in ‘True Blood‘, which might explain the fangs. She also plays the character, Birdie, in ‘A Case of You’. You can check out a fan’s tweet, who agrees with this deduction.

swan on masked singer has to be evan rachel wood

Another popular theory seems to be that Kristen Stewart is wearing the Swan mask. After all, she did gain fame for playing Bella Swan (get it?) in ‘Twilight‘. This would also explain the vampire fangs. However, with Stewart’s determination to mostly stay clear of the mainstream, it does not seem likely that the actress would appear in ‘The Masked Singer’. Nonetheless, you can check out a fan’s tweet, claiming it is Stewart.

My life consists of figuring out the masked singer, today's realization is the swan is Kristin stewart: vampire teeth, swan costume (bella swan) & that awful singing and cmon it sounds like her.

On the other hand, some fans are convinced that it is actually Bella Thorne wearing the mask. One fan has explained how the vampire fangs refer to ‘Twilight’, hinting at Bella’s first name. Moreover, the ghost might refer to Thorne’s appearance in the ‘Scream‘ series. You can check out the thought-out tweet below.

A lot of ‘Twilight’ castmembers have been pointed at, and Anna Kendrick is no exception. One fan has gone on to point out Anna did ballet as a kid, which could explain the choice of outfit. Check out the tweet below.

I think the swan on the masked singer is Anna Kendrick, she did ballet as a kid and was in twilight (so far from the clue pack)

Lastly, Nikki Reed from the ‘Twilight’ franchise, is also a good guess. She is an actor, and a singer-songwriter, whose work was part of the ‘Twilight’ soundtrack. She also plays Rosalie in the movies. This could tie in with the vampire fangs.

The elements of horror we see in the clue package could refer to Reed’s other work, including ‘Sleepy Hollow‘, and ‘V Wars‘. Moreover, fans also believe that Swan sounds somewhat like Reed.

As you can see, there are several guesses about who Swan might be. They all seem to be thought out, based on the first clue package. Most of them seem to be linked to ‘Twilight’ in some way. However, we might be reading the vampire fangs wrongly. We have to wait for a few more performances, and other clues, to narrow down on who Swan might actually be. In the meantime, stay tuned for the latest updates about ‘The Masked Singer’ Season 3.