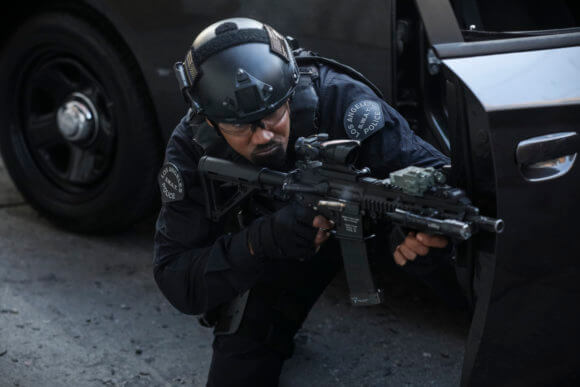 The S.W.A.T. team is always going off on the most dangerous missions, saving the day. The explosive adventures keep the show interesting, and over three seasons, ‘S.W.A.T.‘ has amassed a massive fan following. We cannot wait to see more of Hondo and his teammates, who happen to inhabit the same universe as characters of ‘The Shield‘.

The last episode shows the team getting involved when a boxer’s wife is kidnapped, and the boxer is threatened to throw the fight. Curious to find out what happens in the latest episode? We have got the rundown, besides telling you when and where you can watch the upcoming episode.

S.W.A.T. Season 3 Episode 17 Release Date: When Will it Premiere?

‘S.W.A.T.’ Season 3 Episode 17 is slated to be released on Wednesday, March 25, 2020, at 10/9c on CBS. Titled “Hotel L.A.”, the episode sees the members of S.W.A.T. struggling to protect civilians after an LAPD Gang Division mission goes wrong.

As dangerous gang leaders try to find an escape, Luca has to coordinate efforts to stop them. Things become more complex when Terry, his brother who is a freelance reporter, crosses police lines to get the scoop on the story. Check out the promo below.

‘S.W.A.T.’ is on CBS, so you can watch it using a cable subscription. If you don’t have one, you can turn to the CBS site and stream the episodes. Cord cutters can use options like Direct TV, YouTube TV, Philo or Fubo TV. Amazon Prime users can buy and stream episodes of the show, while Hulu subscribers can catch the first two seasons of ‘S.W.A.T.’.

The episode starts with Hondo having a fight with his girlfriend. She wants to bring in a rapper to reach out to the kids in the community center. However, Hondo has a problem with it, as the rapper had made a song about killing cops, some time back. While he is still fuming from the fight, he is called in, on a case.

It appears that Zane, a child, has been kidnapped. The team soon digs into his life, believing that money is the motive. After all, Zane’s father is an investment guy. However, upon looking closely, it appears that someone called Joel was stalking Zane, in his neighborhood. Once Joel shoots to the top of the suspect list, it does not take the team long to figure out that his past is entirely fabricated.

It turns out that Joel is in WITSEC and Zane is actually his son. The team feels this might be a case of the biological father wanting to be reunited with his boy. However, there is yet another twist. It turns out that Joel, or Quinn, used to work with an extremist group called Accord. It used to be headed by Cassata, who’d tasked Quinn with making bombs.

He’d turned against his teammates, and gotten them imprisoned. After getting out, they tracked and kidnapped Zane to lure out Quinn or Joel. The team soon manages to track Zane, who leads them to Cassata. Not only is the leader taken down, but the suicide vest put on Zane is also deactivated.

The end of the episode sees Hondo supporting his girlfriend’s decision, and apologizing for trying to force his opinions on her. The upcoming episode promises to be just as action-packed and eventful.