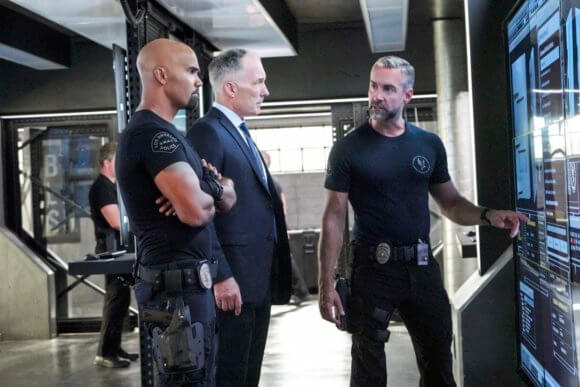 No show combines action with gripping narratives as well as ‘S.W.A.T.‘ We follow the team led by Hondo, as they stop several bad guys in Los Angeles, and save the day. The last episode sees the members struggling to contain gangsters in an L.A. hotel while keeping civilians safe.

Naturally, you might be curious to know what the latest episode has in store. We are here to give you a rundown and walk you through when and where to watch the upcoming episode.

S.W.A.T. Season 3 Episode 19 Release Date: When Will it Premiere?

‘S.W.A.T.’ Season 3 Episode 19 is slated to be released on Wednesday, April 22, 2020, at 10/9c on CBS. It appears, due to the lockdown in place, in light of the coronavirus pandemic, CBS has delayed the upcoming episode of the show.

Titled “Vice,” the pasts of the team members come to limelight when an escaped convict tries to kill Tan. Hondo naturally goes after him with the might of the squad. Meanwhile, Chris has to deal with some internal corruption. You can check out the promo of the episode below.

‘S.W.A.T.’ is on CBS, so you can watch it using a cable subscription. If you don’t have one, you can turn to the CBS site and stream the episodes. Cord cutters can use options like Direct TV, YouTube TV, Philo, or Fubo TV. Amazon Prime users can buy and stream episodes of the show, while Hulu subscribers can catch the first two seasons of ‘S.W.A.T.’

Hondo starts to get worried about Buck when he cannot find him at home. It appears that Buck cannot be contacted on the phone either. Soon, Hondo calls in Deacon and Street to look for the former mentor. Upon investigating, they find that Buck dialed the suicide prevention line, but was not on it long enough to receive help.

Thus, the team starts looking for Buck before he can harm himself. We learn how he was fired for shooting an unarmed black teen. He could not let that go, himself. Buck tried to reinvent himself at a security firm. However, he soon understood he was being used to recruit other L.A.P.D. officers.

The rejection fueled his alcohol habit, and he started drinking heavily. While the team tracks Buck, they get called in to apprehend a man named Darby. He’s dangerous and on the loose. Naturally, their resources are divided. Hondo sends Deacon on Buck’s trail.

While he manages to track Buck down, Deacon cannot talk him out of harming himself. The few tricks he tries were taught to him by Buck, and the pro sees through it quickly. However, Street and Hondo show up as well. Together, they convince Buck that they don’t want to live in a world without him. It gets through to the former mentor, who abandons his course of self-harm.

The experience drives Hondo and the entire team to a therapist, where they discuss how hard it has been to look for Buck while opening up about their fears and issues.