Based on the 2017 namesake webtoon by Kim Kan-bi and Hwang Young-chan, ‘Sweet Home’ is a South Korean live-action TV series that tells the story of a world where humans suddenly start turning into monsters. In its inaugural season, the show focuses on the tenants of the Green Home apartment building, and their desperate attempts at survival as their world rapidly becomes feral around them. What is remarkable about ‘Sweet Home’ is that it doesn’t use the traditional human-monster conflict as the core issue. Instead, it concentrates on how its characters, both humans and monsters, react to their circumstances. Beyond all the action, gorefest, evocative imageries, and the thumping tracks by Imagine Dragons, ‘Sweet Home’ is a show about individual desire. SPOILERS AHEAD. 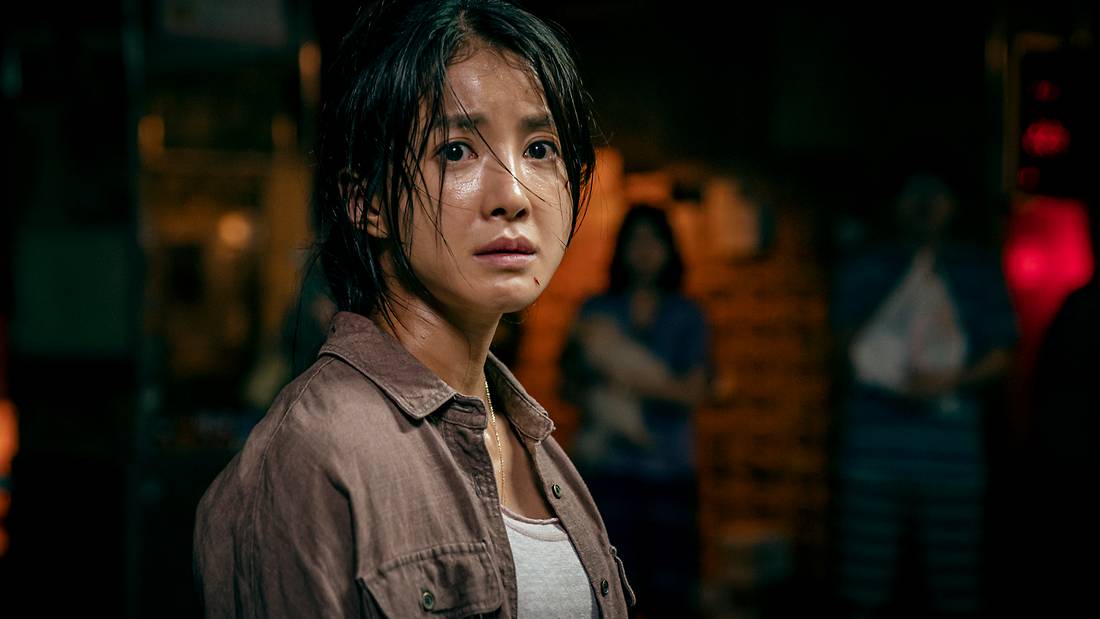 Not long after troubled teen Cha Hyun-soo (Song Kang) moves into the Green Home apartment building, people begin transforming into monsters and attacking others. Although Hyun-soo and others initially think that this is a disease, it later turns out to be a curse. It’s not infectious, and not everyone is afflicted with it. The monsterization in this show is the manifestation of people’s most ingrained desire. The eye monster is how the original human‘s voyeuristic tendencies have manifested, whereas the protein monster represents its obsession with physical fitness in its previous life.

With no idea about who will turn next, the survivors form a tentative alliance under the leadership of Lee Eun-hyuk (Lee Do-hyun), who creates an effective system to ensure their safety and perseverance. Food and water are rationed. Venturing anywhere alone is prohibited. And most importantly, the ones who start showing signs of metamorphosis are quarantined. Hyun-soo begins his transformation early in the series but never completely goes through it, turning into something vastly different from both humans and regular monsters. Ever the pragmatic, Eun-hyuk keeps Hyun-soo alive through the Golden Hours, the period of time when monsters are vulnerable, and often sends him out on dangerous errands, knowing that the latter has the best chance of completing them because of his apparent immortality.

In the season finale, the human-monster conflict again takes the center stage after the military drops flyers promising sanctuary to those who report a “special infectee” like Hyun-soo. While Seo Yi-kyeong (Lee Si-young) doesn’t contact the military with the beacon she was given earlier, one of the other survivors does. With the group still reeling from the outlaw attack in the previous episode, Eun-hyuk’s system has come apart. When the other special infectee starts indiscriminately killing the other survivors, Hyun-soo is forced to choose between them and one of his own kind. For all the time he has been used to serve as their errand boy, they are now the closest thing to a family he has. In the ensuing battle, he undergoes yet another transformation, becoming a one-winged entity, and kills the other special infectee. As the military arrives and surrounds the building, Yi-kyeong finds an underground path that can take them outside by digging at the same place where Ahn Gil-seop (Kim Kap-soo) was before his death. 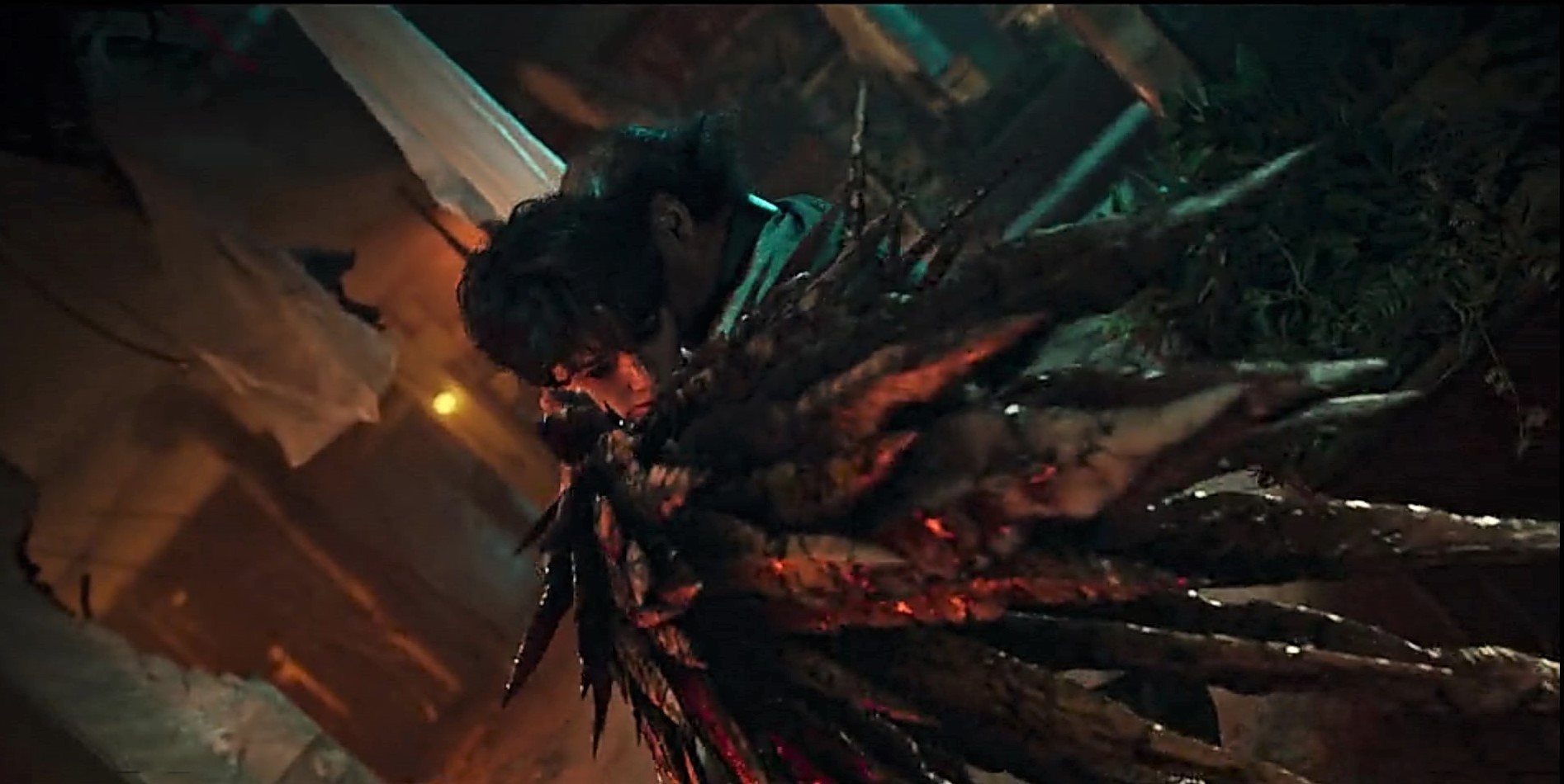 Religion, especially Abrahamic mythology, plays an important part in the plot development of ‘Sweet Home’. Up until his death in episode 8, the devout Christian Jeong Jae-heon (Kim Nam-hee) serves as the physical representation of the theological themes in the show. His constant battle with alcoholism as well as the typical humility of a faithful keep his desires at bay, preventing him from turning. Other characters, like Lee Eun-yoo (Go Min-si) for instance, have found their own way to circumvent the problem. It doesn’t mean that they don’t have remorse or unfulfilled aspirations. Eun-yoo believes herself to be responsible for the deaths of her and Eun-hyuk’s parents and knew even before the monster apocalypse that she is not going to become a ballerina because of her injured foot. And yet, she refuses to give in to those incessant questions that often start with a “what if” and manages to keep her humanity for now. 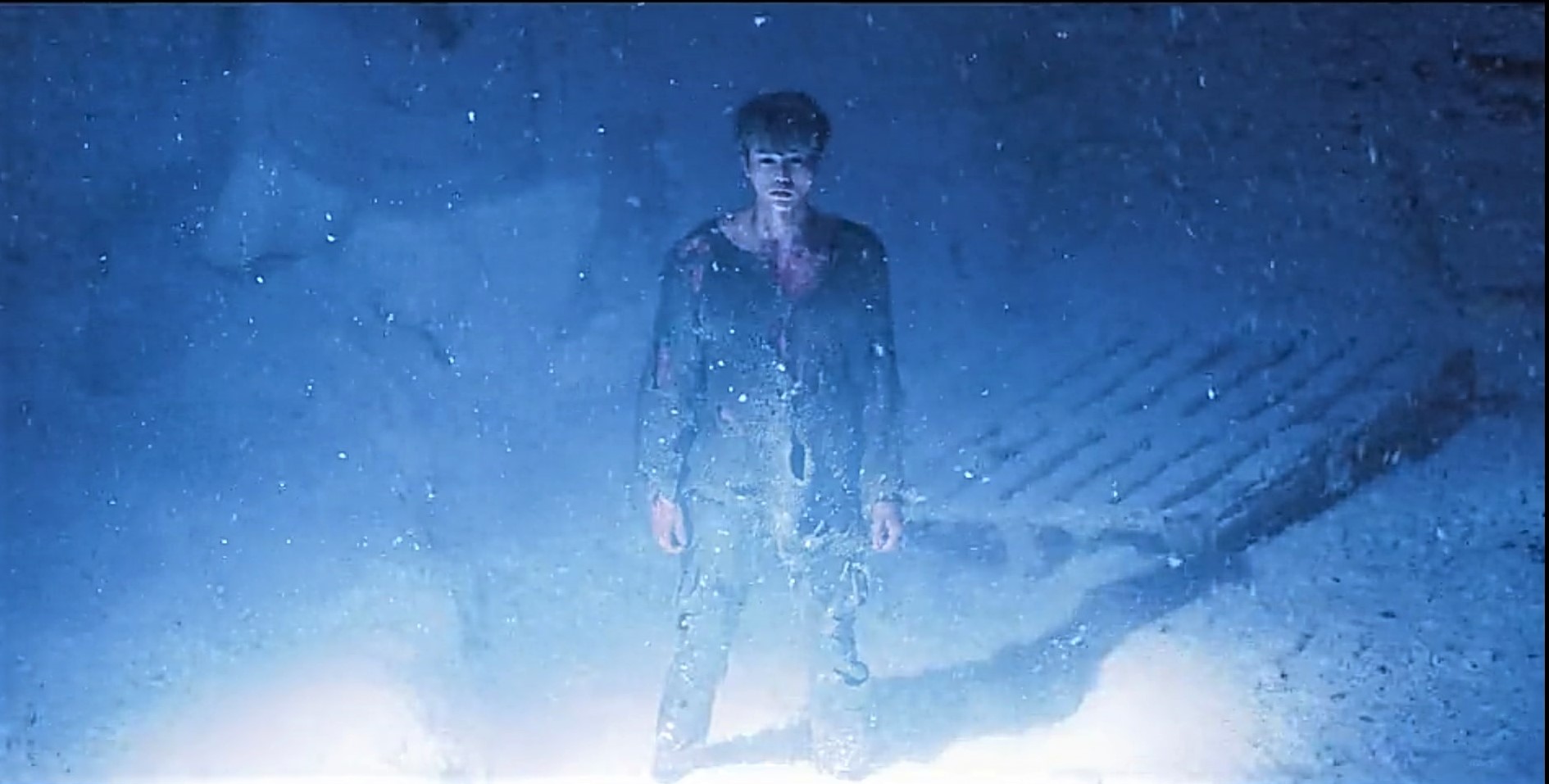 Hyun-soo’s life has been riddled with tragedy. He used to be a bright and happy kid until a rich classmate started bullying him. The constant mental and physical torture drove him to severe depression and reclusiveness. The one instant he tried to stand up against his tormentor resulted in his father losing his job. It also inadvertently caused the death of a classmate’s mother. The more withdrawn he became, the more shame his family felt about him. He found some friendship and camaraderie online, and that was enough to keep him going at the time. But then, his entire family is killed in a car accident. Because of what he had perceived as their indifference towards him, he had been hoping for their deaths in the deepest, darkest corners of his mind. But when that actually happens, he realizes the ultimate truth about his immediate reality—he is now all alone in the world. Every day, he wakes up with suicidal thoughts and even sets a day to finally go through with it. But before that day arrives, the monsters start coming out.

It is that entrenched desire for a family and for a place to belong that begins his metamorphosis. Despite being acutely aware of the fact that Eun-hyuk and others have been basically taking advantage of his demureness, he decides to fight for them against the other infectee. A one-winged demonic being is a popular trope in anime that denotes someone who is treading the thin line between their humanity and true evil. In a series like ‘Sweet Home’, in which some monsters demonstrate human qualities and people often commit acts of profound brutality without any inhibition, Hyun-soo serves as the meeting point of two extremes.

In the climactic moment of season 1, he becomes a representation of the best of both kinds as he walks out of the building to meet the awaiting soldiers, alone, but for the first time in his life, unafraid. He loses consciousness in the ensuing gunfire. When he wakes up, he finds himself in a military vehicle with Pyeon Sang-wook (Lee Jin-wook). The last time Hyun-soo saw him, he was taking Park Yu-ri to a pharmacy to get an inhaler for her and was shot by the other special infectee. He notices that the other man doesn’t have the severe burn marks on his face. Unbeknownst to him, Sang-wook has undergone a metamorphosis of his own, with his desire to ensure Yu-ri‘s safety being the catalyst. What is more startling is that he is wearing military gear.

From the beginning, the rest of the characters just assume that Sang-wook is a criminal. The final moments of the show make it highly improbable. He is probably a former special forces officer like Yi-kyeong, a fact that he painstakingly hid by pretending that he can’t shoot, even during the outlaw invasion. If the incapacitated (or dead) soldier beside him is any indication, he likely attacked them while they were transporting Hyun-soo and has managed to overpower them. This would mean that both of them are now on the run from the military.

Eun-hyuk’s main objective throughout the season has been the safety of the group as a whole. To achieve that goal, he is willing to risk any individual, including himself, if a particular situation calls for it. Because of his seemingly distant and even detached mannerisms, others like Yi-kyeong erroneously conclude that he doesn’t feel empathy. On the contrary, he is capable of incredible understanding and sacrifice. After their parents’ death, he dropped out of school to ensure that Eun-yoo doesn’t have to stop her training as a ballerina. After the monsters begin rising, he quickly becomes the de-facto leader of the group of survivors because of his inherent leadership abilities.

When he realizes that he is turning as well, likely due to his sheer desire to keep everyone else safe, he puts himself in self-quarantine, keeping true to the rules that he himself has set. He makes this ultimate sacrifice for his sister and others. He knows that he is now possibly their greatest threat, so he separates himself from them. 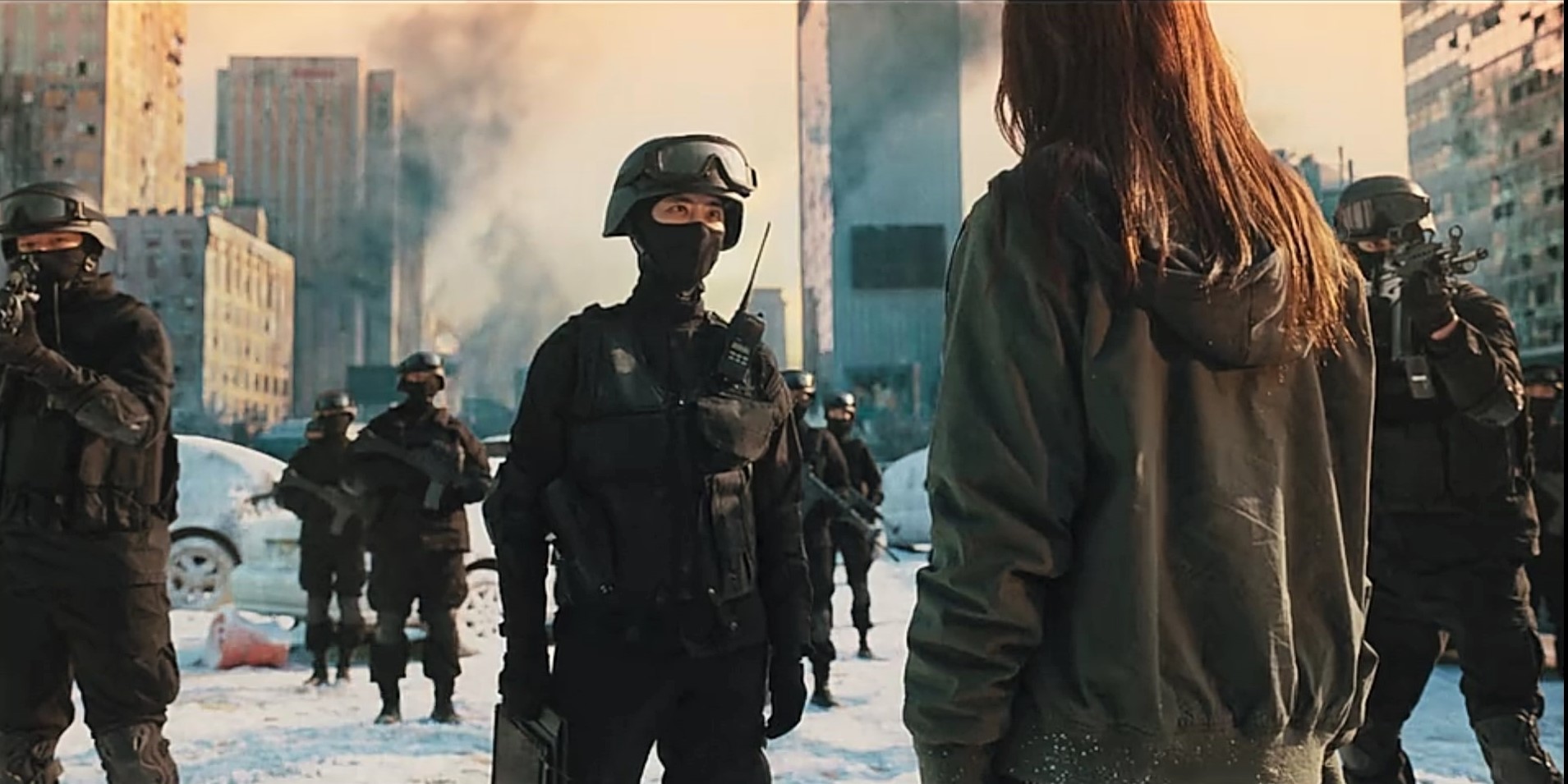 With the help of the pet dog of one of the survivors, Yi-kyeong finds a way out of the underground tunnel, only to discover that the military is waiting for them at the exit. It is the time for Yi-kyeong to face her own realities as well. As she didn’t use the beacon, the commanding officer tells her that their deal has been canceled. But they still have something that she wants—the information about what happened to her fiancé. As the rest of the group are boarded on a truck, she puts on military gear. Evidently, she has entered into a new deal with the commanding officer, and it is probably to track and find Hyun-soo.