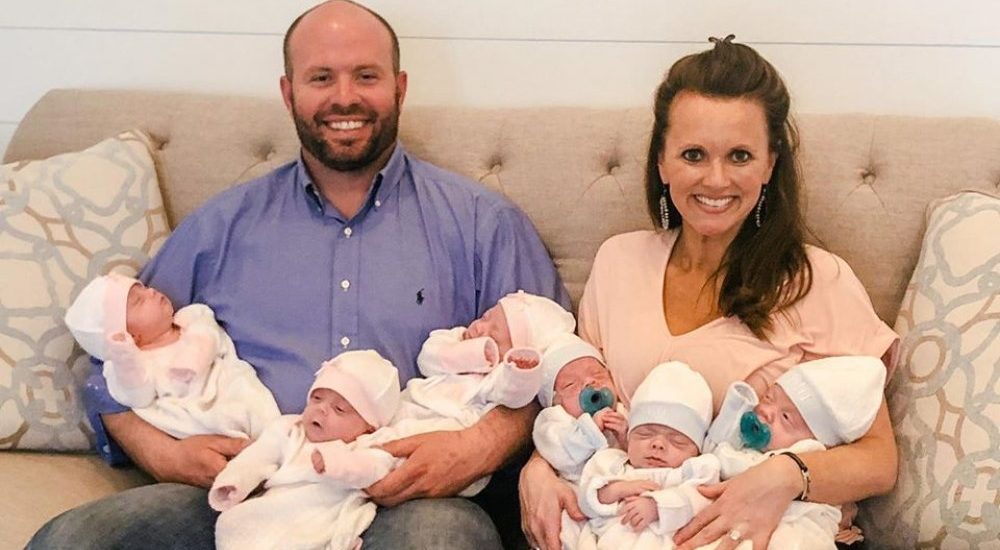 ‘Sweet Home Sextuplets’ is a well-loved TLC series that follows Eric and Courtney Waldrop as they raise their family in Alabama. Over the seasons, the show has gained a lot of following, as the sextuplets have enthralled audiences who are with the kids in every step of their journeys. We have watched the kids have many firsts, like their first step or first word, and have even witnessed them developing individual personalities. However, how much of this unfettered access into the Waldrop family is true? Is ‘Sweet Home Sextuplets’ scripted?

The family-oriented reality show appears to be transparent on the surface. Eric and Courtney have been introduced as childhood sweethearts and this is not an exaggeration. The two met as eighth-grade students and have been together since. Eric proposed to Courtney during their final year at Auburn University, Alabama, and they got married in June 2004. Since then, Eric and Courtney have remained an inseparable team, raising kids together.

Saylor took this picture of us🌼 I look at this picture of us and think “oh my goodness do we really have 9 kids and six 2 year olds🙈 I’m asked all the time “HOW do you do it?? My answer is “I really don’t know” and I really don’t know other than the Lord gets us through..I do know that to be a fact because I think we would have already given up if the Lord didn’t provide the strength that He does everyday!! I really cannot describe what it’s like raising 6 TWO year olds!! There’s really no words for it🤪 well actually the more I think about it there’s a gazillion words for it…..blessing, exhausting, fun, tiring, wonderful, hard, rewarding, trying, good times, hard times and the list goes on and on but most of all THANKFUL!!🙌🏻 thankful for our 9 blessings, thankful for this life God chose for us to live and more than anything thankful for this sweet man here that I couldn’t get through the day without!! He’s my rock, my everything!! Sometimes on those really hard days when I break down into tears he’s right there to pick me up and say “we can do this” just like God told us from the beginning HE had this…and HE did and still does have it and He reminds me of that everyday through my sweet, sweet husband!!💗🙌🏻💗

Unlike a lot of parenting shows, where couples insist that they do everything themselves, only for it to be revealed that they have a nanny, Eric and Courtney are not afraid to ask for help. Even though Courtney quit her job to be a full-time mother to the kids, she can’t handle all of them. Therefore, the townspeople and friends and family of the Waldrops often help them in taking care of the babies.

Moreover, since Eric and Courtney never wanted to do the show in the first place, they are more likely to try and keep the tone as authentic as possible. Eric revealed that they are not seeking fame and don’t want to be celebrities. The couple wants to show America how good God has been to them, and they want to share their faith and gratitude for the blessings bestowed on them by a higher power. You can check out a Facebook post that Courtney has made, which echoes similar sentiments.

Just want to say thank you to everyone for your sweet and encouraging words towards last weeks show!! When we first…

While the couple tries to keep things as realistic as possible, and the children don’t fabricate anything, ‘Sweet Home Sextuplets’ is still a reality show. Thus, we might expect slight blemishes that come at the hands of the producers, or during editing. Fights between the couple or sequences might be heavily edited to give an askew portrayal of what has happened. Often, such editing is also aimed at making someone the villain of the series. However, Eric and Courtney seem to be very much in love and share a relationship of mutual trust, which means that the show probably doesn’t get many chances to skewer their dynamics.

In conclusion, ‘Sweet Home Sextuplets’ is as real as it gets, but it is also a reality show. Therefore, you’d be best off if you don’t believe everything that is shown and take things with a pinch of salt.