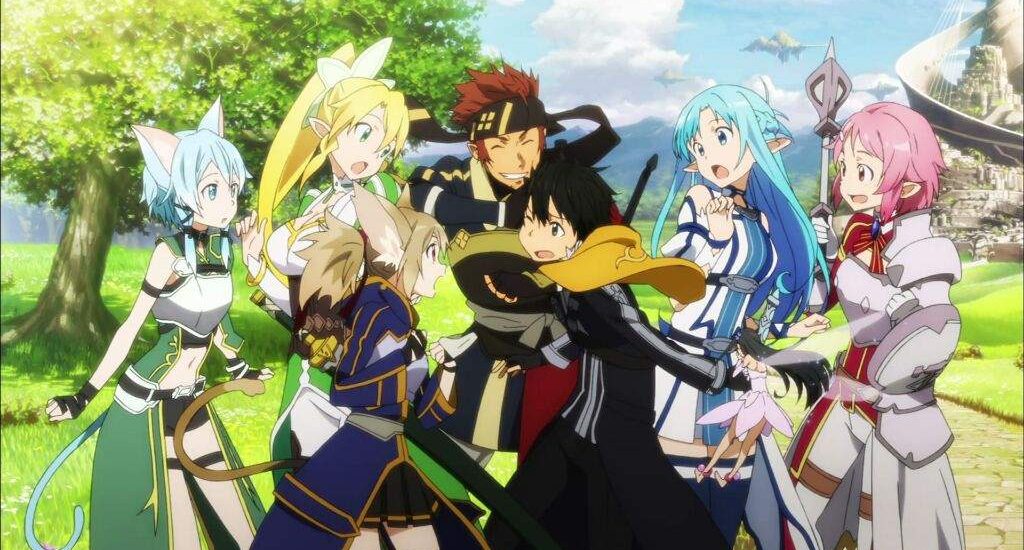 The mere utterance of the name of ‘Sword Art Online’ causes mass hysteria among the fans who claim that it is the best anime ever made. The haters on the other side of the spectrum claim that this anime should have never even existed. Intense hatred or not the series did become a major hit when it rose to fame and went completely viral soon after its release. The core idea behind the anime is that characters are trapped in video games and if they die in the games they will die in their real life as well. Sounds a lot like ‘Ready Player One’ doesn’t it or maybe more like ‘Spy Kids: Game Over’.

Halfway through the first season, it feels like ‘Swords Art Online‘ would come to an end but it somehow stays maybe because of the characters. The biggest problem with this anime is that there is no such thing as subtlety and everything is just very sudden. After a while, it becomes very obvious that the show is just trying to forcefully get an emotional response out of you. The good part is that substantial improvement can be seen in the second season of the anime if you compare it with the first one. Even the action sequences and the drama around the characters seems to be a lot better. But the end of this season does not really give to many hints about the next season. A cliffhanger would have been great to get fans all hyped up for the next season. Still, the improvement season 2 certainly peaks our hopes for a season 3.

The third season will probably be about the Alicization arc but I wouldn’t go around looking for more information on this. It’s better to know nothing at all before starting off a new season. One thing we know for sure about the next season is that things will get very dark and grim and this can either be nailed perfectly with some good animation or it can be butchered completely like the first season.

When it comes to the first season, we would still recommend that you watch it if you haven’t seen it yet because as bad as it may be, it still ties up with a lot of things in Season 2 and also it gives you a more logical flow to the whole series. The franchise has redeemed itself fairly well after the first season. But some viewers feel that the show has managed to take its immense popularity for granted. What’s clear about ‘Sword Art Online’ is that whether you love it or hate it, you can’t ignore it. That’s why both haters and lovers are now eagerly waiting for the next season. We hope that it will be at least as good as the second season if not better. Let’s dive a little deeper into the plot and review of season 2 of the anime to understand how it is still standing its ground.

‘Sword Art Online‘ Season 2 premiered on July 5, 2014 and went on till December 20, 2014. This season has a total of 24 episodes and each episode is 23 minutes long. It is an adaptation of a light novel series written by Kawahara Reki that first came out in 2009 and has had close to 20 volumes by now. So it is pretty obvious that this anime series is not ending any time soon. You can find the details about Sword Art Online season 3 right here.

Pretty much like the first season, this season too is broken down into Arcs. While the first season consisted of the Sword Art Online arc and the ALfheim Online arc, this one covers three other arcs- Gun Gale Online. Excalibur, and Mother Rosario.

The second season starts off with its prime focus on the Gun Gale arc and it remains this way all the way up to its first half. In the beginning, a player named the Death Gun comes to the attention of the Virtual Crimes Division because of his cold acts of killing many people in the real world through the game. Death Gun shoots other players using his handgun and the players who get shot die from a heart attack in the real world (reminds you of Death Note, doesn’t it?). These killings get really confusing for the Virtual Crimes department because the Nerve Gear from the first few arcs has already been banned and the new replacement Amuphere gear could not possibly harm someone in real life. Death Gun has somehow figured out a way to get past this and something needs to be done to stop him.

This is when the main protagonist of the anime comes into picture. He/She is the god of video games and goes by the name Kirigaya Kazuto or in short Kirito. It’s a bit surprising to see that Kirito is a girl in this new arc especially for those who are not familiar with the source material. This change in identity is because of a flaw that initially runs in the game that ends up automatically creating a female identity for him. This is probably done to make fun of all those people who pose as opposite genders in the real-life online gaming world. Getting back to the story, Kirito is hired by the Virtual Crimes Agency is sent inside the game to find out who Death Gun truly is. Kirito also gets some help from other characters along the way and manages to eventually understand how Death Gun has been killing people outside the game.

The other two arcs covered in this season are more or less of fillers. The Excalibur Arc covers the story of Kirito trying to summon the Excalibur sword which involves nothing but an MMORPG side quest. In this quest all Kirito has to do is enter a dungeon, kill a boss and grab the sword. It’s as simple as that and only lasts for 3 episodes. Then we finally arrive at the Mother’s Rosario arc which gets depressing as hell at times. Better sit with a box of tissues for this one. It revolves around a fighter named Zexceed who shows up at 3 pm every single day and challenges people for duels. Kirito gets challenged and loses his battle on purpose because he knows that Zexceed is actually a girl named Yuuki Koono.

Yuuki Koono then meets Asuna who impresses her with her great fighting skills. She offers Asuna to join her guild, The Sleeping Knights and help them defeat a boss. The Sleeping Knights want to defeat a boss so that before they disband their team forever they can at least get their names etched on the walls once. Asuna joins them and they eventually end up defeating a boss to get their names on the wall. But the real reason behind killing the boss is something deeper and will make you cry your eyes out. You should watch the anime if you want to know more about it.

The first arc covers 14 out of 24 episodes of this season and it’s this arc that mostly saves the say for the whole anime. In fact, the first and the last arc both hit home and the middle one just exists. The story of the first arc has been crafted really well and it unfolds slowly and but picks up pace wherever necessary. The ending too is very satisfying and maybe a little predictable but there’s nothing more they could’ve done with it. The final arc is very impactful emotionally and its grave ending hits you right in your guts. This arc too has been pulled off really well in the very few episodes that it got to cover such a touching story. Overall the story and its pacing are more than decent if only one ignores the second filler arc.

The sound and music are above satisfactory and the characters are not annoying to listen to which is obviously a good thing. The opening and closing tracks are beautiful and even after 24 episodes, you will not get bored with them.

The art and the animation too is something one cannot complain about especially when it comes to the first arc. Gun Gale is set in a world that is crumbling down into ruins and there’s sand everywhere. You can see bullets flying around everywhere and it’s just a perfect scenario for a game like this. The new bosses and characters have also been designed fairly well. One noticeable flaw can be seen in the background characters who all look very similar to each other but it’s understandable that drawing so many unique characters is just a waste of time.

Kirito, Asuna and all other characters are in this season as well and they’re all better than ever, to say the least. Most new characters are just ignored after a while and the prime focus remains on Kirito in the first arc. Clearly, an advantage of Kirito’s female characterization has also been taken for some fanservice here and there. But overall the first arc does well when it comes to developing Kirito’s character but could’ve done a little more with other characters like Death Gun. The characters in the last arc are just incredible and it’s their whole personalities that add up to the emotions you feel while watching it. You get to see Asuna in a way you have never seen her before and the new character Yuuki is just beautifully done.

Overall this anime truly deserves the hype that it has been getting. If the makers don’t go ahead with many more seasons of this anime it would be a waste of one gem of a series.

The English Dub version of ‘Sword Art Online’ Season 2 is available on Aniplex of America and on Crunchyroll.