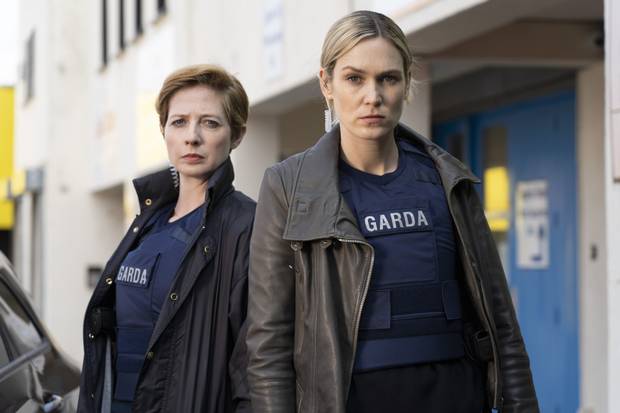 ‘Taken Down’ is a gritty and high-profile Irish crime drama, which follows the investigation after the murder of an asylum-seeking refugee, named Esme. The series is executive produced by Spiral Pictures’ Suzanne McAuley and directed by David Caffrey. It is written by best-selling author Jo Spain and Stuart Carolan.

The show first premiered on RTE in 2018, after which it was soon announced that it would be distributed on the international platform. In the US, the drama releases exclusively on AcornTV.

Taken Down Cast: Who’s in it?

‘Taken Down’s cast is lead by Lynn Rafferty, starring as Detective Jen Rooney. Rafferty is an Irish actress, well-known for her roles on ‘Love/Hate’ and ‘Ripper Street’. She is joined by Aissa Maiga (‘Anything for Alice’, ‘Bianco e Nero’) as Abeni Bankole, Brian Gleeson (‘Resistance’, ‘Phantom Thread’) as Wayne, Orla Fitzgerald (‘The Young Offenders’) as Niamh, Jimmy Smallhorne (‘Love/Hate’, ‘Clean Break’) as Gar, Barry Ward (‘End of The F*cking World’, ‘The Fall’) as Matt, Enoch Frost (‘Skyfall’, ‘The Desert’) as Benjamin, and Slimane Dazi (‘A Prophet’, ‘Rengaine’) as Samir.

All the main cast members are expected to return for season 2, if and when it happens.

Taken Down Plot: What is it about?

This revealing, engaging Irish drama is set in Dublin, where the body of a dead Nigerian girl is discovered at a bus stop, leading to a detailed investigation into her death. Inspector Jen Rooney and her crew of detectives unravel a series of clues that point them to a housing center for asylum-seekers in the vicinity. However, when asked to come forward, the residents are fearful of the investigators — either terrified of being deported or simply suspicious of the cops. They are reluctant to reveal anything.

The story exposes the fragile world of refugees and the impact that the investigation has on their lives. While certain exiled individuals find themselves as suspects, others harbor intense traumas that are unraveled as the inquiries progress — at times, leading to tragic aftermaths. The center’s manager also repeatedly intervenes in the procedures, leading to increased chaos.

As the cops continue to search for the killer(s), another Nigerian girl, Flora, goes missing from the housing complex. The police begin to think if they have stumbled on a case that is set to expose a pandora box of connected crimes and upcoming murders. In a race against time, Rooney and her crew attempt to locate Flora and gradually dive deep into a hidden world of trafficking and prostitution. They find a brothel, which is somehow linked to both the young girls and run by a gang of dangerous criminals who would stop at nothing to prevent exposure.

Rooney and her team of detectives, upon entering this dark underworld, witness how their personal and professional lives start crumbling, But still, they stay focused on the task at hand — to rescue Flora before she suffers a horrible fate like Esme.

Season 1 finally concludes after an exhaustive investigation that unmasks Esme’s killer. And as you can expect, it is not obvious. You might think that either some of the monstrous characters or sleazy, repellent and psychotically violent individuals would be the murderer. But that’s not it. While certain suspects end up tampering evidence and being involved in the incident, the mastermind is someone unexpected. So, who is the guilty party? And what happens to Flora? Is she rescued? You will have to see the show to find out.

Season 2, if commissioned, could either further dig into the case of Flora or it could take up a different case that deals with the plight of refugees.

Taken Down Season 2 Release Date: When will it premiere?

The finale does offer a sort of closure to the story. However, the fate of several characters is left hanging in mid-air. So, it looks like there’s a lot of scope to carry the plot forward. Additionally, the high viewing figures alone are sufficient to ensure there will be a second season. No official update has been announced by RTE yet, but as soon as we hear anything about ‘Taken Down’ season 2 we will update this section.

Should You Watch Taken Down?

‘Taken Down’ is a wonderful attempt in highlighting the despair of direct provision and the dehumanizing horror of the sex trade. There’s also the accompanying police procedural element that is highly engaging. According to a statement by the Irish Refugee Council, “It is good to finally see this experience feature in mainstream media in a genre that falls outside of news and current affairs programming.” They further added, “The experience of direct provision is all too often one of isolation and a sense of being unseen or forgotten by Irish society. We hope that the show will contribute to the conversation taking place around the direct provision and finding an alternative way of accommodating people seeking asylum in Ireland.”

Below is the official trailer for season 1 of ‘Taken Down’.