The show adopts an anthological format and focuses on a single resident of Mercer (the town where the series is set) each episode. The first episode of the series sees a young girl trying to find her mother and ending up meeting an adult version of herself living in the same world. The second episode revolves around a teenage boy, Jakob switching bodies with his friend. The third episode, on the other hand, revolves around Jakob’s girlfriend, May, and is titled ‘Stasis.’

Tales From The Loop Episode 3 Recap:

The episode begins with May thinking about Jakob and wondering why she cannot live in a particular moment forever. She is depicted tinkering around with a cylindrical object.

Then, May is shown finding the cylinder while fishing (hence, the scene described above is a flashforward). She notices an Asian teen standing alone from her car. Upon returning home, May discovers a metallic bracelet attached around the cylinder, which she removes. She wears the bracelet on her wrist.

Later, May meets the Asian teen, Ethan at the bar when she is hanging out with Jakob. They start to talk and decide to take a walk. Ethan has a twisted foot since birth. Ethan talks about living in the moment, and the two complete each other’s sentence. May and Ethan start to hang out. They see a mechanic on the road. May steals a glass tube from the mechanic while Ethan distracts him.

May and Ethan go to the former’s house where they kiss. May’s mother walks in on them while they are making out, and Ethan leaves. May removes a broken glass tube from the cylinder and replaces it with the tube she stole from the mechanic. There is a switch on the cylinder that she switches on. Then, the entire world except for May freezes/pauses.

May and Ethan explore the town, having fun while the whole world is frozen/paused. They have sex in the middle of the street. Ethan asks May how to say “I love you” in Chinese (according to the subtitles. We are aware that there is no language called Chinese, but cannot tell whether May speaks in Mandarin/Cantonese/any other language). The two say, “I love you” to each other in “Chinese.”

They spend close to a month in this state. However, when they try to switch the cylinder on, it doesn’t work. Ethan asks May if he is stuck here. May gets irritated and tells him that she is stuck too. The glass tube inside is broken. They go to the mechanic’s house to get another glass tube.  In the mechanic’s house, May finds her mother’s earrings. Then, she goes to the bedroom and sees her mother and mechanic frozen mid-sex. She gets angry. May starts to act out, and Ethan asks her why she is acting like a bitch. May calls him a cripple. Ethan leaves. A new glass tube has been found, by the way. 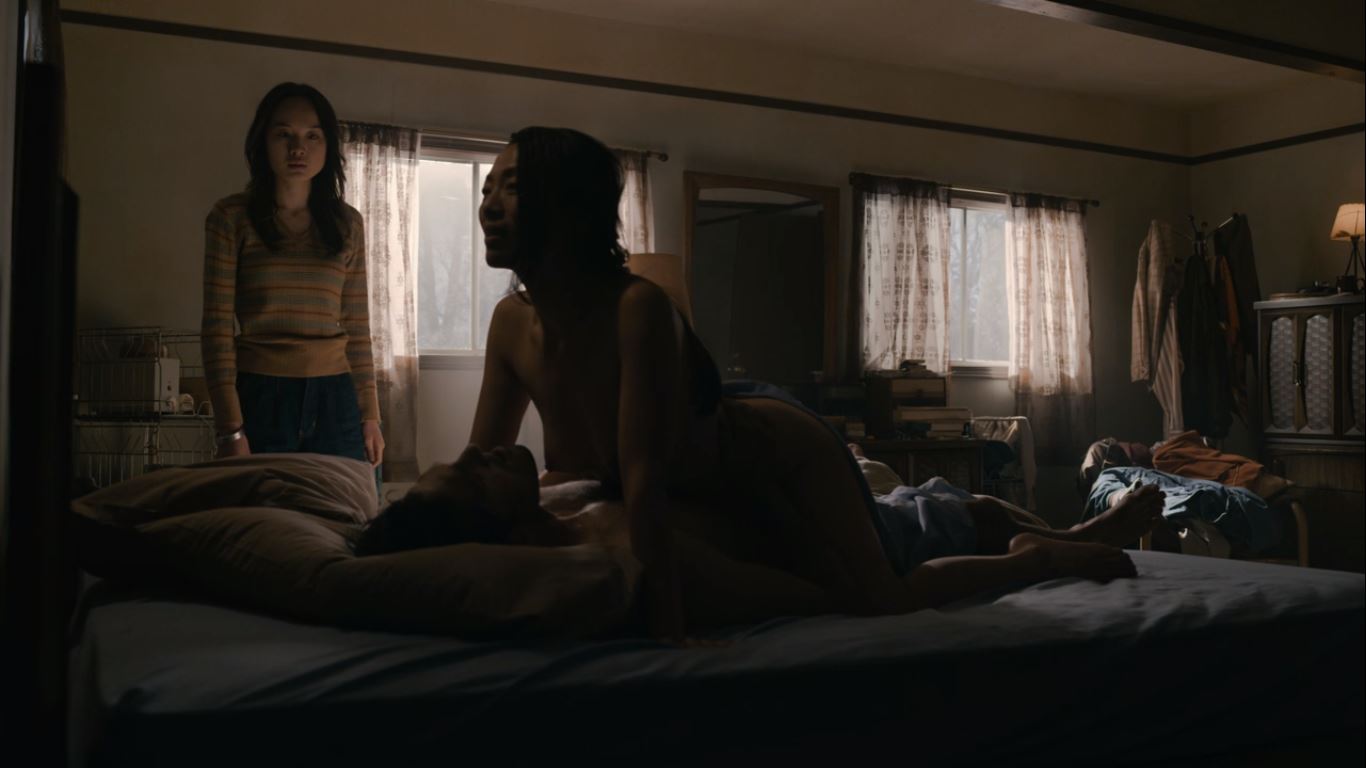 After a while, May tries to find Ethan. He is at the spot where she first saw him. She tells him that she got angry when he told her that he was stuck here. She tells him that she thought he was going to leave him. However, she realizes that Ethan is frozen as he has removed his bracelet. She switches the cylinder off with the new glass tube inside, and it works.

Then, the first scene replays: May thinks about why a moment cannot be extended. May tells her father that her relationship with Jakob might have to end. May’s father tells her that sometimes, things are special because they do not last. May returns the earrings to her mother. Then, she sees Ethan across the street. He walks towards her. May tells Ethan that he broke his promise. Ethan tells May that he loves her in “Chinese.” May does not say it back.

The fourth episode of ‘Tales From The Loop’ ends on a rather inconsequential note. It seems as though it does not signify anything. And it actually does not, plot-wise. However, it does connote something thematically.

The episode begins with May thinking about making a moment last. However, she is thinking about Jakob and not Ethan. Towards the end, May does not say “I love you” back to Ethan. One way of looking at this is that May’s short stint with Ethan wasn’t really about her falling in love with Ethan.

Subconsciously, May is trying to see if she can extend a particular moment forever. She is wondering why “the honeymoon phase” of relationships come to an end at some point. She has seen her parents seemingly fall out of love. May has also fallen out of love with Jakob but is too scared to end it. She still cares for Jakob, but she knows that their relationship cannot last since her romantic affection towards him has ended.

Moreover, she also tells Ethan how she does not like being alone because she is not her favorite person. Hence, the episode’s ending could also signify May finally coming to terms with the fact that she ought to love herself first before attempting to love somebody else. Perhaps, she realizes that “the moment” will always pass (with anybody) after a while if she does not like herself. Viewers also ought to remember that Jakob is not really Jakob. After the second episode, it is Danny who has been living Jakob’s life in the latter’s body. Jakob has been living inside a robot.

The episode also takes a look at the very idea of “living in the moment.” It is an alright way of thinking, but not sustainable if one does not consider real-world implications. Hence, Ethan and May’s short-lived relationship is like a dream that they have to snap out of at some point. As a teenager, May realizes that a real relationship is more than just a fantasy.