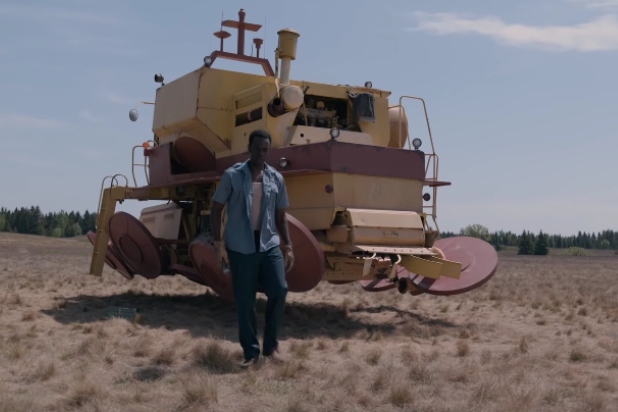 Anthology science-fiction series these days face the need to overcome comparisons with ‘Black Mirror’ as the Netflix series is responsible for repopularising the format for the genre. The Amazon original, ‘Tales From The Loop’ faces the same obstacle due to its loosely connected anthological format. However, such juxtapositions wither away upon viewing since ‘Tales From The Loop’ manages to stand out with its distinct tonal and atmospheric characteristics.

Adapted from Simon Stålenhag’s art book of the same name, ‘Tales From The Loop’ relies on visual imagery to narrate various human-centric stories set in an Ohio town. Each episode generally follows a different resident of the town which sits on an experimental physics center. A presence of otherworldly space-time anomalies and alternate realities drives the stories forward from the background. However, they never overpower the real-world conflicts of its characters.

Tales From The Loop Episode 6 Recap:

The sixth episode of ‘Tales From The Loop,’ titled ‘Parallel,’ focuses on The Loop’s security guard, Gaddis. A single man, Gaddis keeps looking at and thinking about a man in a photograph. One day, he sees a new resident cycling. Later, he goes to an open field where he has been trying to fix a tractor suspended in the air. Gaddis had found the man’s photograph from the tractor. He suddenly sees a hole in the ground that seems to vacuum things around it inside (like a black hole). However, it shuts soon.

Then, at the town’s bar, the cycling man sees Gaddis and approaches him. The two end up having an awkward conversation. A woman helps Gaddis fix the suspended tractor. When Gaddis starts the tractor, the air around it mildly implodes as if there has been a disturbance in the space-time continuum. The tractor stays at the same spot.

Upon returning home, Gaddis notices that his house is completely different. He goes to the neighbor’s house. A man looking exactly like Gaddis opens the door. This man will be referred to as “The Clone” henceforth. Disturbed, Gaddis walks away but The Clone tackles him since he wants to talk.

The next morning, Alex, Gaddis and The Clone try to fix the tractor but fail. The Clone tells Gaddis that he should stay here and that the two can be friends. Indeed, The Clone and Gaddis become fast friends due to their similar personalities. Gaddis asks The Clone and Alex lots of questions about their relationship. Both of them tell him that they love each other despite the occasional arguments and difficulties.

Gaddis starts to get attracted to Alex and the two end up having sex. A few days later, Gaddis observes The Clone and Alex having a major argument which results in Alex leaving the house temporarily. Gaddis has been writing his feelings for Alex in his diary. He gives Alex his diary because he wants to be with him.

Gaddis buries his diary and goes to the bar. There, he sees the cycling man. It turns out that the cycling man, in this parallel reality, is into birdwatching just like Gaddis. The two start to chat.

The sixth episode of ‘Tales From The Loop’ ends on a rather sweet note. Gaddis starts talking to Kent, the man on the cycle. In this parallel reality, Kent is depicted to be a “birder,” or someone into birdwatching, just like Gaddis. In the original reality (where Gaddis actually belongs to), Kent and Gaddis do not get along. Hence, the ending of the sixth episode probably connotes how there is always somebody for everybody.

However, it could also indicate the fact that there is nothing like perfect love and that a “perfect” relationship needs to be worked on, rather than waited for. Gaddis changes as a person after spending some time in the parallel reality where he meets an alternate version of himself. Earlier, Gaddis is depicted to be idealizing love. He stares at a photo of Alex and has a very specific idea of his perfect soulmate. This is the reason he does not really open up to Kent in his own reality and their conversation fizzles out after Kent does not like his taste in music.

However, after meeting Alex, Gaddis realizes that there is nobody who is perfect for anybody. As a matter of fact, there are no perfect human beings. Hence, expecting one’s partner to be perfect is rather unfair. Gaddis’ clone has several problems with Alex as well. However, their relationship works because the two acknowledge that and work on their problems.

It is only after Gaddis realizes this that he opens up to Kent. Yes, the Kent in this reality is a birder. However, there is no indication that the Kent in Gaddis’ original reality was not a birder. The two just did not talk much after the initial conversation.

Tales From The Loop Episode 6 Review:

The sixth episode of ‘Tales From The Loop’ feels the most similar to ‘Black Mirror’ because of its excessively weird premise. However, that is where the similarities end since the Amazon original focuses on the central character a lot more than the plot, unlike the Netflix anthology. While viewers find themselves to be engaged because of how well Gaddis’ character is sketched, the rest of the episode turns out to be rather underwhelming.

Despite the decidedly slow-burn tone of ‘Tales From The Loop,’ one would expect the series to pick up the pace and provide some real answers as it progresses. However, after watching the sixth episode, it seems as if the sci-fi series does not intend to do so. That would definitely turn out to be a huge letdown for viewers expecting some mind-bending expositions.

However, what does work for ‘Tales From The Loop’ are some of its complex ideas. For instance, the episode depicts how loving oneself is an integral requirement before finding someone else to love. The Clone is depicted to be much more confident and sure of himself than Gaddis. It is evident how such an attitude helps The Clone get what he wants more successfully.

Apart from that, the episode also portrays how relationships aren’t perfect since humans are imperfect. With The Clone and Alex’s relationship, the episode depicts how loving another person is not as breezy as it sounds and requires a constant effort. Moreover, it also shows how Gaddis being picky limits his chances of finding someone to bond with. One has to be vulnerable, take chances and open themselves up for the possibility of being hurt to actually find “true love.” However, these complex ideas do not seem to materialize into anything cohesive. That, unfortunately, has been the biggest weakness of ‘Tales From The Loop.’