Meditatively, Amazon’s ‘Tales From The Loop’ has presented an interconnected anthology about a town sitting atop an experimental physics center. By focusing on a different resident each episode, the show paints a multi-dimensional picture of the retrofuturistic town of Mercer.

Based on Simon Stålenhag’s art book of the same name, ‘Tales From The Loop’ tells a tale that is extremely human-centric for its genre. While the show is an anthology, the family members of the founder of the experimental physics center that Mercer sits atop can be considered to be the central characters. The seventh episode, titled ‘Enemies,’ focuses on another member of the family, George.

Tales From The Loop Episode 7 Recap:

The seventh episode begins with a teenage boy trying to fix a radio. He lives with a couple of friends, Chris and Adam. The three go for a horror movie in a theater. Then, the boys find a snake under a rock and tase it to death. Then, they talk about an island a few meters across the shore of Mercer. The island is believed to be haunted by a monster. Apparently, the monster came from “underground” to kill people and is related to The Loop.

The boys decide to go to the island on a boat. They find a broken canoe at the island’s shore. Chris and Adam quickly take the canoe and leave the teenage boy on the island as a prank. The boy finds a broken radio and begins to fix it. He hears a monstrous screech from the woods and then gets bitten by a water snake on his hand.

Then, he finds a tent in the woods on the island. It starts to rain, and the boy sleeps under a fallen tree trunk. Upon waking up, he hears screeching and sees a humanoid figure in the distance. Then, he starts to run as the “monster” chases him. After a genuinely scary sequence, the “monster” finds him. The “monster” is a robot. The boy tases the monster. Chris and Adam come looking for the boy, shouting his name: George. This is when it is revealed that the boy is George when he was younger. 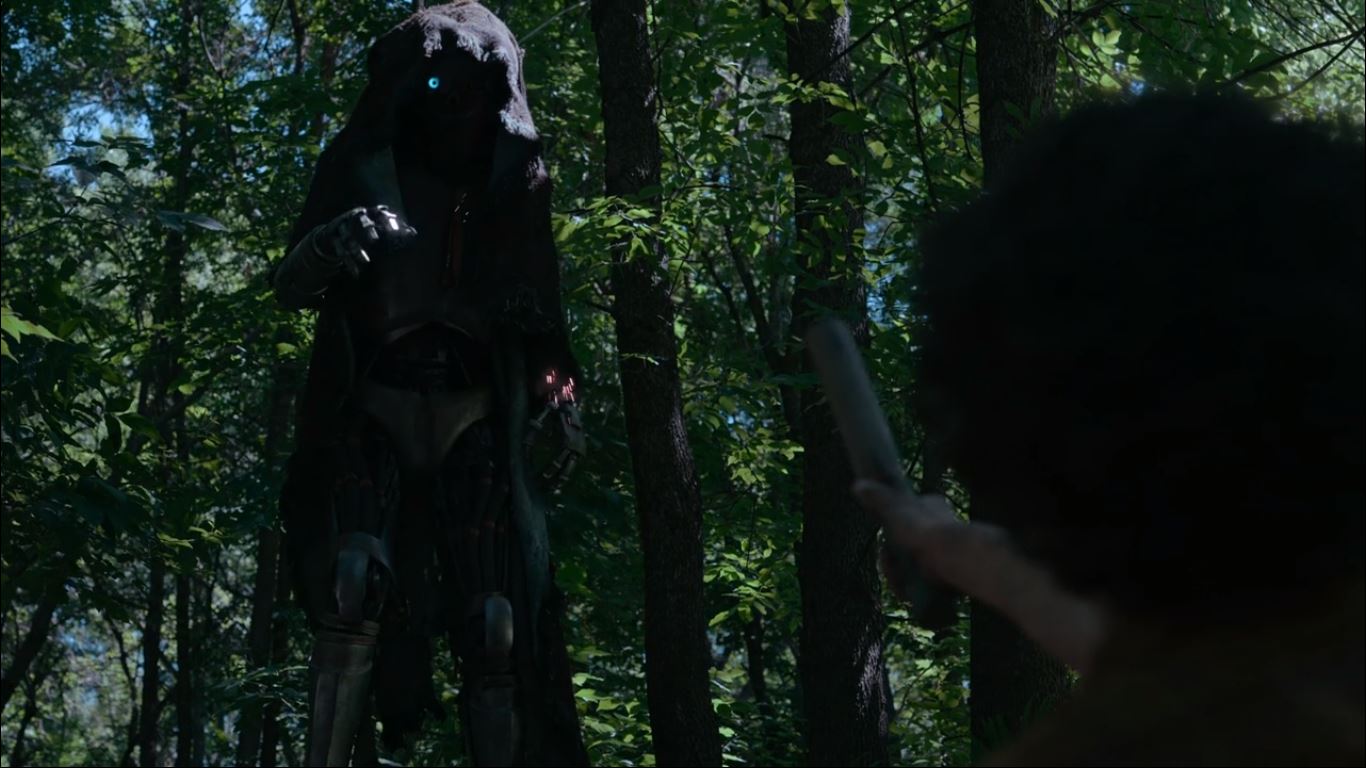 Back at Mercer, George’s hand has to be dismembered due to the snake bite. This is when George gets his bionic arm. Russ tells George to not tell anyone what he saw on the island. Then, the episode jumps several years to the time when George is an adult, in the “original” timeline of the show. George’s bionic arm does not work properly. When he goes to get it fixed, a technician suggests getting a newer model. But George wants to continue using the arm he has since he has grown attached to it.

The seventh episode of ‘Tales From The Loop’ is by far the most engaging episode of the series so far. Moreover, it is also one with the strongest message. Many viewers might be wondering what the episode and its ending signify.

To understand what the makers of ‘Tales From The Loop’ are trying to convey, it is important to think about other science-fiction works. Previously, a common theme for science fiction has been the rise of the machine and the threat of technology. Technology is often seen as a threat to humankind. Think of the classic tale, ‘Frankenstein.’ Frankenstein is the embodiment of this human vs. technology conflict. Sci-fi often portrays technology as an object of horror.

The episode alludes to this tendency with the use of the horror movie that Adam, Chris, and George watch. George’s family watches the same movie later in the episode. So, where does this fear stem from? According to the conversation between Klara and George, the makers of ‘Tales From The Loop’ depict how humans are scared of something that is different from them. There are several tiny moments throughout the episode that depict that.

For instance, one of George’s classmates sees his bionic arm and asks him if he is a robot. But ‘Tales From The Loop’ intends on changing that perception. Another scene in the episode involves a little girl getting fascinated by an adult George’s bionic arm at the barber’s. George allows the little girl to touch and feel his bionic arm. “See? There’s nothing to be afraid of,” George tells her.

Then, when George goes to the island once again, as an adult, he puts his bionic arm on top of the robot’s hand-shaped carving on a tree trunk. The size of the bionic hand fits the carving perfectly. All of these signs combine to provide a rather impactful message at the end: technology or anything different is not something to be scared of. The episode depicts how extending a helping hand (literally) might make us empathize with the very thing that scares us. Such empathy might be enough to end the horror that exists on both sides.

The final shot of the episode shows the bionic arm on the ground. The shot signifies the union of humankind and technology: something that science fiction predicts will happen in the future. It shows how humans and technology are not so different because one is the creation of the other. The fact that George has grown attached to his hand and does not want a newer model also connotes that.

This “union” between humans and machines has also been another trope in science fiction. It has been a topic that has seen various viewpoints. This trope and several others have led to sci-fi storytellers exploring what really makes one human. “Can robots have human tendencies?” Isaac Asimov asks in ‘I, Robot.’ ‘Do Androids Dream of Electric Dream?’ is the name of Philip Dick’s novel, which was adapted into ‘Blade Runner’ and asks whether robots/androids can be empathetic (a decidedly “human” characteristic).

Of late, there has been a growing trend in sci-fi that tends to tilt towards the idea that machines can also have human-like tendencies. They depict the idea of the union of humans and machines as something that is not evil. The most popular, contemporary example of this is ‘Westworld’, whose third season finally starts to depict how this fusion is inevitable. It also shows how the treatment of technology/machines as feeling-less slaves is something that ought to be changed. Now, after the seventh episode of ‘Tales From The Loop,’ it makes much more sense why the series chooses to depict human-centric stories even if that means the makers need to trade off a fast-moving plot.

Read More: Where is Tales From the Loop Filmed?