‘Tales From The Loop’ is a piece of art that demands a massive change in the way one consumes a story. Throughout its eight-episode run, the series frustrates viewers by posing mysterious questions and not answering them convincingly. Amongst the outlandish sci-fi happenings, there is always a humanistic story that takes center stage. While the character-driven drama effectively makes viewers feel tons of things, the outlandishness of the events seems senseless.

‘Tales From The Loop’ demands viewers to let go of the urge to make sense of things. It is certainly difficult to do so, and the Amazon series does not prepare viewers for it. Instead of providing answers, the series satisfies viewers with a cohesion of human emotions. Let go of meaning, and one would be rewarded with a huge pay-off. Trying to cling on to the nitty-gritty and logistics would only lead to disappointment and a failure to understand the extremely moving anthological narrative.

Tales From The Loop Episode 8 Recap:

The final episode begins with Cole playing with his ball. After starting work at The Loop, Jakob has moved out. Cole misses him. At school, a teacher gives Cole a book to read. She tells him that he can talk to her if his recent promotion to middle school feels challenging.

Cole and Klara hang out and click pictures. Klara sees someone at the top of the central building of the three giant towers. Later, Cole goes to see Jakob at his new home. Viewers ought to remember that Jakob is not really Jakob. It is Danny who is living inside Jakob’s body. Danny had switched bodies with Jakob in the second episode of the series. From henceforth, the character of Danny living in Jakob’s body will be referred to as “Danny.”

>Danny tells Cole the truth. He tells Cole about the robot in which Jakob’s mind/soul is. Cole goes to The Loop to meet Loretta, but the guard tells him that she has gone to the city. Then, Cole goes to the woods and finds the robot that Jakob’s mind/soul is in. Henceforth, the robot will be referred to as “Jakob.” Cole kicks the ball towards Jakob. Jakob kicks it back. Cole hugs Jakob. 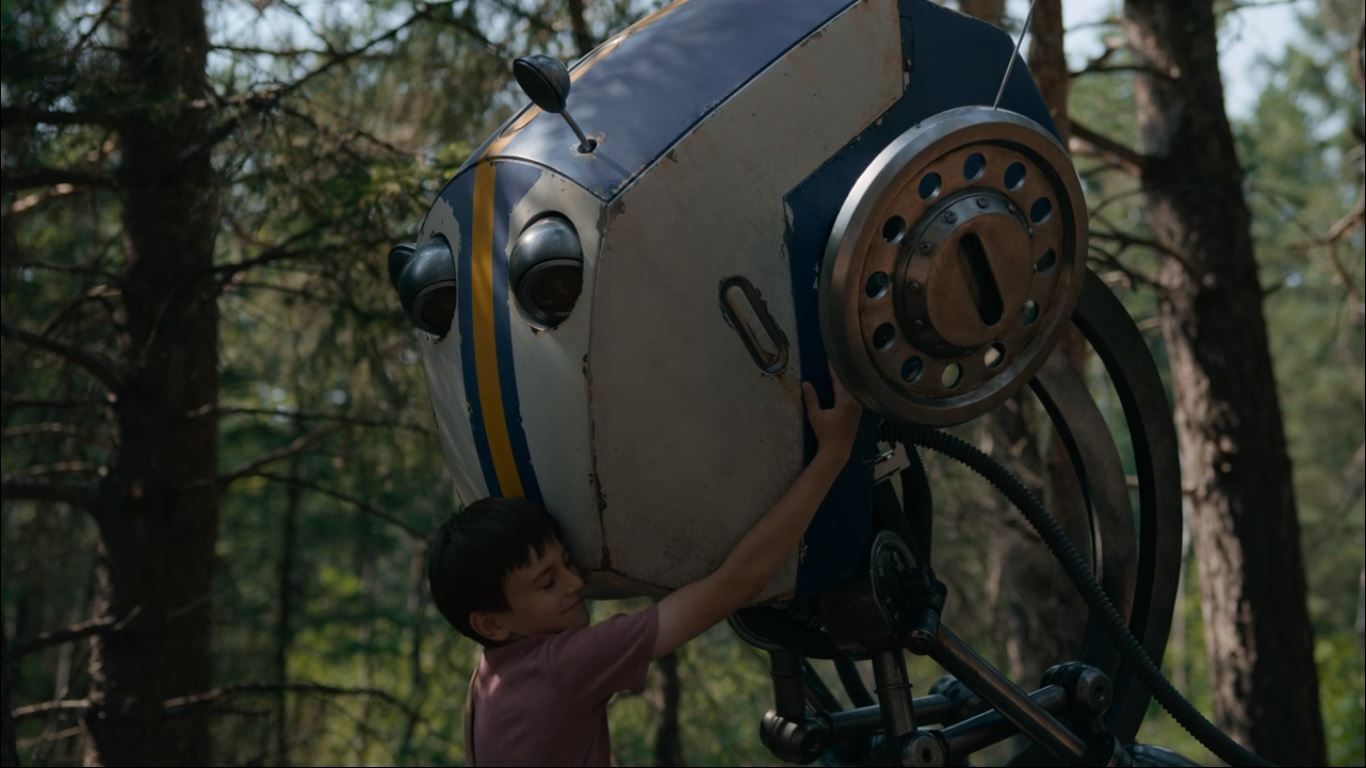 Cole tells Jakob that Loretta would know how to make things normal again. The two cross a tiny stream that has frozen mysteriously. Some distance ahead, another robot appears and starts attacking Jakob. Jakob manages to destroy the robot, but a cylindrical object from its body falls down. Jakob starts to limp. Because of that, Jakob cannot step over a fallen tree. He falls down and dies. Cole makes a pine cone shrine for it. 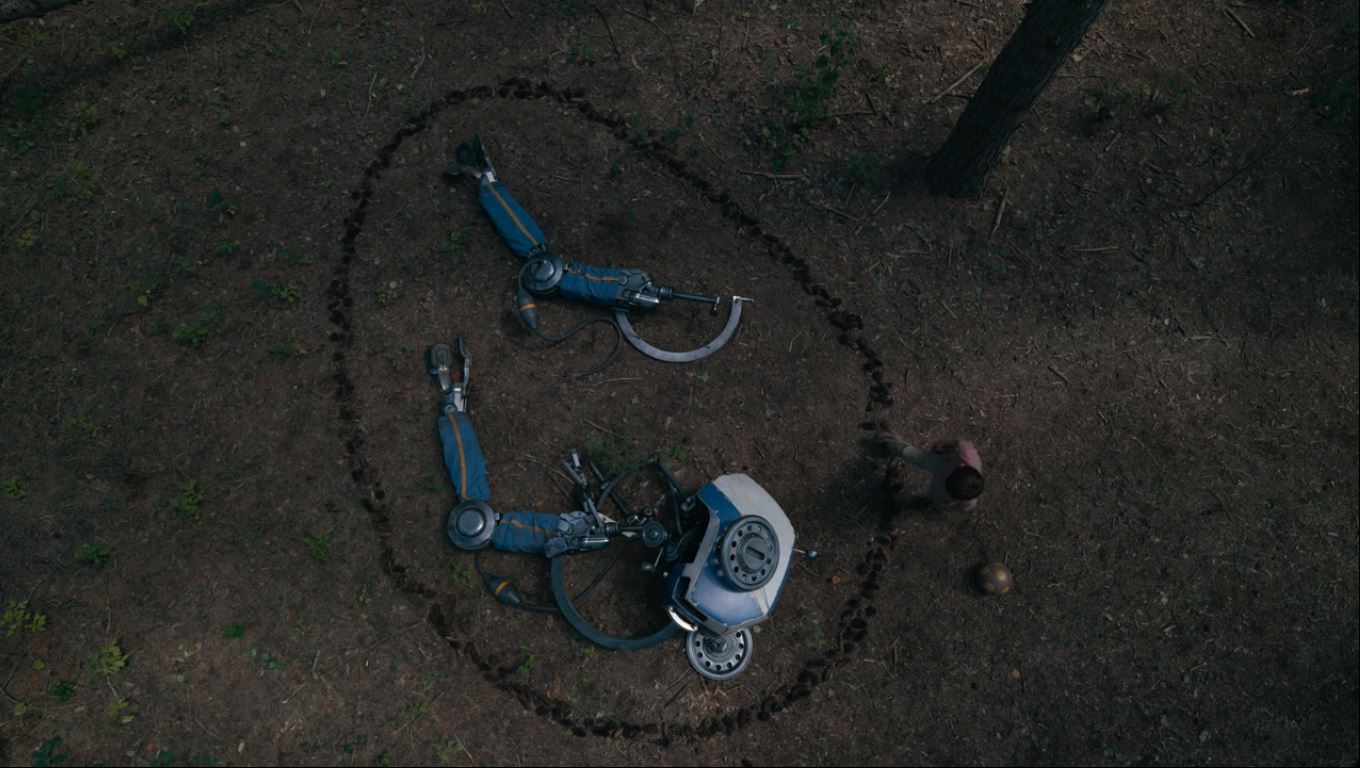 Cole goes back and finds out that the stream has turned into liquid again. Cole puts his ball in the stream, and it flows downstream. Instantly, the ball returns to Cole, floating from the other direction! After Cole crosses the stream, it turns to ice instantly!

He goes to The Loop to look for Loretta again and sees a flying machine. A few seconds later, Loretta returns, but she has aged into an older woman! She knows about Jakob. Then, a montage depicts what happened in the “past.” Danny told Loretta and George about the truth. The couple found Jakob’s dead, robot body, and Cole’s shrine. Danny started to live with his parents. George eventually passed away, leaving Loretta alone. Loretta tells Cole that he had been in the woods for such a long time because he had crossed the stream when it was thawed.

An adult Danny (in Jakob’s body, but grown-up) visits Cole. He now has a daughter named Nora. At school, Cole returns the book, after reading it, to the teacher that gave it to him. It turns out the teacher has not aged at all. Cole asks why she hasn’t aged. The teacher tells him that change is something that happens in nature and that she is not a part of nature. She tells him that she was Russ’s second creation (the first one being the “monster” on the island), a robot. She takes off her head to prove it. 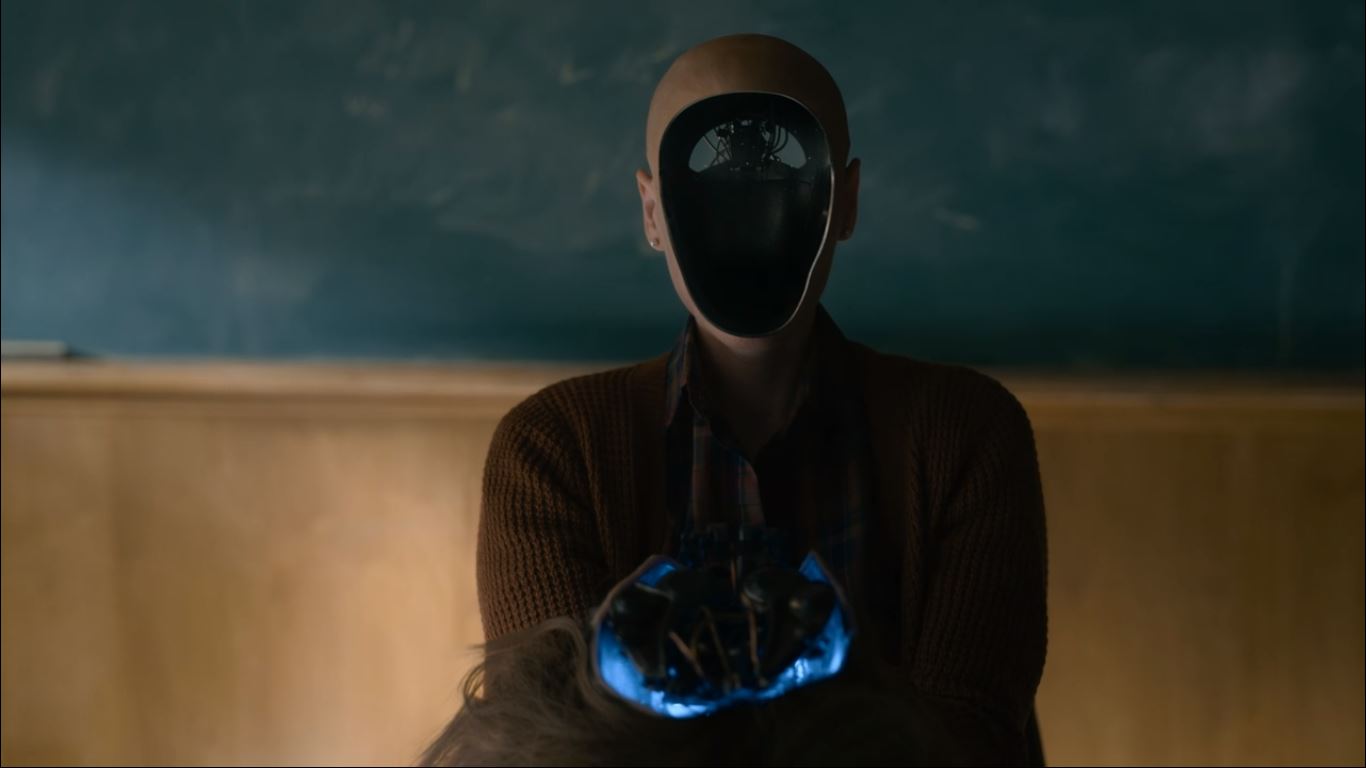 Cole takes a picture of Loretta. However, when he looks into the camera’s lens, he sees Loretta as a child (the one seen in the first episode). Later, Cole hears a horn from the central tower. He climbs the tower and reaches the top. “Cole?” someone calls.

Tales From The Loop Ending Explained:

‘Tales From The Loop’ is a puzzle with no answer. The final episode certainly raises several questions in viewers’ minds without really answering them. Yet, it feels satisfying because of the breadth of human emotions that it manages to capture. The story intends to leave one confused. If you aren’t confused, you haven’t actually watched ‘Tales From The Loop.’

Yet, we shall try to reason the show out as much as possible. Firstly, there is no indication whatsoever of what The Loop does. But everything outlandish is related to The Loop. It would be reasonable to say that The Loop plays with the idea of time, and distorts it. From the eighth episode, one can assume that its “powers” are limited to the town of Mercer.

This is evidenced by the stream. The stream can be considered to be one of the boundaries of Mercer. Hence, when Cole crosses it, he finds himself to be outside The Loop’s influence. The Loop makes time in Mercer pass by extremely quickly. However, time outside Mercer progresses “normally.” Hence, when Cole returns to Mercer, a significant chunk of time has already passed.

It ought to be noted that the above explanation is a theory and not something confirmed by the show. Anyway, Loretta tells Cole that time moved fast since Cole crossed the stream when it was thawed. This is another indication of the fact that the stream is the boundary within which The Loop can exercise its powers.

But what of the ending? The ending is another event that is open to interpretation. One theory is that the ending signifies how Cole tends to hold on to the past. Klara tells Cole earlier in the episode that the camera can be used to click pictures of whatever he wants to preserve. Hence, by clicking a picture of the town in the camera, perhaps Cole preserves Mercer of that time in his memory. Perhaps, Cole is like the young Loretta from the first episode, someone who co-exists with their adult self.

The series never brings young Loretta back. It is assumed that young Loretta lives in a loop. Similarly, it can be presumed that Cole has also been living in a loop. He would grow up, become an adult, and bring his family to see his Mercer home once again. At that time, another version of young Cole would stand atop the central tower and click a picture.

As mentioned earlier, ‘Tales From The Loop’ does not intend to provide definitive answers. Hence, viewers might still be thoroughly confused, with thousands of questions. But these questions will never be answered. ‘Tales From The Loop’ is meant to be an absurdist, heart-tugging puzzle. Don’t think through the series. Feel through it.