Will There be a Taste The Nation With Padma Lakshmi Season 2? 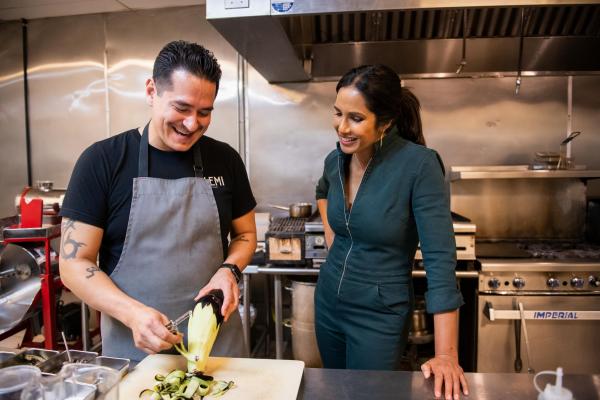 ‘Taste the Nation With Padma Lakshmi’ is an ambitious take on the food documentary category of tv shows. We all have heard about American food. But what is it anyway? Several of the dishes that are branded as ‘native American’ have ingredients that are not indigenous to the US soil. In an attempt to get to the roots of the origins of ‘American food’, ‘Taste the Nation’ takes us on a tour across the country. We see different types of cuisines and learn about the immigrant communities who created them. Well, with such an admirable concept, you must be wondering if there will be a ‘Taste the Nation With Padma Lakshmi’ season 2. Read on!

‘Taste the Nation With Padma Lakshmi’ season 1 released on June 19, 2020, on Hulu. It consisted of 10 episodes. Ever since its announcement, fans of the titular host had high hopes from her series. And the show did manage to stay true to its promises. The travel sum food documentary lends a different insight into America and its diversity.

Although Hulu, currently, does not have a plan for a follow-up edition, we are highly optimistic about a renewal — noting the title’s informative concept. Of course, Hulu will first gauge the viewership and then make a decision. If the numbers are according to the platform’s expectations and the show is given a go-ahead, we can expect ‘Taste the Nation With Padma Lakshmi’ season 2 to release sometime in 2022. We are expecting a longer waiting time since the series has a travel component, which might translate to an extended filming span.

Needless to say, the second season will see the return of Padma Lakshmi as the host. Padma is primarily known to fans because of ‘Top Chef‘. Additionally, the author, actress, and model is a Primetime Emmy nominee who holds around 20 years of experience in culinary culture. She has also penned three cookbooks and a memoir.

What Can Taste The Nation With Padma Lakshmi Season 2 be About?

Each episode of ‘Taste the Nation’ takes viewers to a particular locale in the US and highlights a specific immigrant community. Host Padma then tastes their native dishes and gives us insights on the importance of the place in American culture. Across the episodes, Padma visits El Paso, the Arizonian desert, and her hometown in Jackson Heights, Queens. She traces the German roots of hot dogs, hamburgers, pretzels, and meets the Gullah Geechee people of South Carolina. And how can we forget the appeal of Chinese food? Padma explores the impact of Chinese immigrants in San Francisco as well. We additionally witness her sampling Persian food, Peruvian cuisine, Thai dishes, and Japanese delicacies. Season 2 is expected to continue chronicling Padma’s journey as she visits additional immigrant groups to uncover the relationship between America’s food, identity, and history.