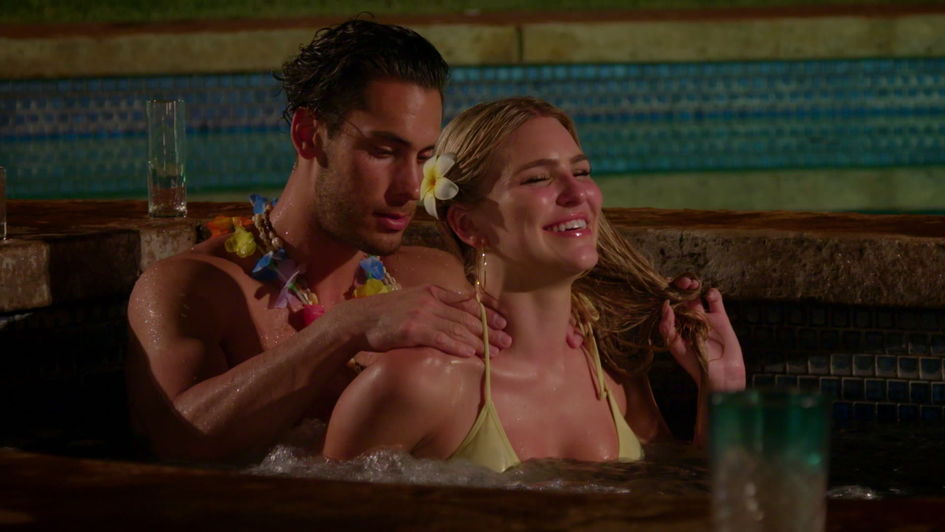 In an age of reboots, ‘Temptation Island‘ brings back one of the favorite questions people like to ask of themselves – am I ready to commit for the rest of my life. Obviously, doing it as part of a reality television show must be a little taxing, but couples seem to be giving it a go in this series hosted by Mark L. Walberg.

In a tropical paradise, the couples are forced to ask themselves about whether they want to commit to each other for the rest of their lives. The tropical setting should ideally come in handy, making everything more romantic. Unfortunately, there is a slight curveball. The couples have to stay with singles of the opposite sex to test the strength of their relationships. As you can understand, many a heart and head turns, during the course of the show, while new romances bloom and old ones die under the tropical skies. ‘Temptation Island’ is based on the Dutch show ‘Blind Vertrouwen’ or ‘Blind Faith’.

As we head towards the finale of the current season, you must be wondering about what to expect. We have you covered in that regard, but first, let us walk you through where and when you can watch the upcoming episode of ‘Temptation Island’.

Temptation Island Season 2 Episode 10 Release Date: When Will It Premiere?

‘Temptation Island’ Season 2 Episode 10 brings us ‘The Final Bonfire’, where the participants will decide which couples go back together, and who goes back home alone. Notably, the finale will be broken into two parts. ‘The Final Bonfire Part 1’ is slated to be released on Thursday, December 12, 2019, at 10 PM ET. Naturally, we will get to see it on the USA Network.

The upcoming episode will witness the couples reuniting at the final bonfire in order to make one of the most important decisions of their life.

‘Temptation Island’ headed to the USA Network with the reboot, so your best option is to catch the show there. If you’re unable to get to a television set or do not happen to have a cable connection, there is no reason to get worried. There are plenty of options that will allow you to stream ‘Temptation Island’ online using a cable-free live television streaming service.

Watch the latest episode easily on your phone, computer, or tablet, using FuboTV, or Sling TV. All of these platforms offer the USA Network as part of the channel bundle.

The finale of ‘Temptation Island’ is preceded by selecting an overnight date. It remains to be seen which couples are tempted to stay or stray, after this incident. For now, the pairings stand as follows. Gavin asks Mia to be his final date, but the latter rejects it, saying she is uncomfortable spending a night with him. As she leaves ‘Temptation Island’, Gavin’s offer is taken up by Lady P, or Payton. The two end up having a wonderful platonic date.

Rick and Medinah are clearly not going to be a romantic item, as Rick has explained. Medinah will have to be content with being in the friend zone. However, she has commented that Rick conducted himself wonderfully around her, and both he and his girlfriend should be proud of it.

Ashley G and Jose seem to have a great time golfing, but the former is unsure of her partner Rick, with whom she arrived on the island. It is clear that Ashley realizes she needs to iron out some issues and Rick might not be coming along for that ride, after all.

Casey and Rachel enjoy some downtime in the jacuzzi, but it is clear that all the former wants is Ashley H. He seems to love her very much and still believes that they are going to end up together. After all, they did come together, and Casey even buys an engagement ring for her with a little help from Rachel.

Ashley H and Ben, meanwhile, seem to be having their own love story. They go on a magical date and have an incredible kiss. Tracing their friendship with each other seems to be yet another nail in the coffin in any possibility of a relationship between Ashley and Casey. Ben too admits that he is falling for Ashley, and since they both seem to have had the date of their lives, this could be a new couple emerging from ‘Temptation Island’.

Although Gavin and Esonica came together, the latter seems to be having a great time with Kareem. They seem to bond at an intimate level, with Esonica even saying that her’s and Kareem’s souls are matching. It sounds like the start of something new for the two.

Meanwhile, David and Kate, who both came as a couple, seem to have found new loves on ‘Temptation Island’. Kate can be seen with Domonique, and their overnight date quickly escalates to a sensuous makeout session, which apparently tells Kate a lot about Dom. They seem to have reached a new level of intimacy as well.

David and Toneata, meanwhile, are officially a couple now, discussing the logistics of David’s move to Los Angeles. The two seem to have reached a new degree of closeness and intimacy overnight. We head to the finale on this note, and Reality Steve, a blogger known for spoiling shows like ‘The Bachelor‘, and ‘The Bachelorette‘, has offered an overview for the finale. According to the blogger, all couples will not be leaving the upcoming bonfire intact. There have been hints at some cringeworthy moments, and dismissals similar to the first season. We have a pretty good idea that Ashley H and Casey will be breaking up, no matter how optimistic the latter might be. The former seems to have given her heart to Ben.

Notably, the blogger has mentioned that the bonfire reunion has already been filmed, and the couples are in different places mentally, in the current day than when the finale was being filmed. However, news of a breakup is enough to get us excited about the approaching finale of ‘Temptation Island’, and though we have a pretty good idea about the way the episode is going to pan out, the show has surprised us before, and might yet again.