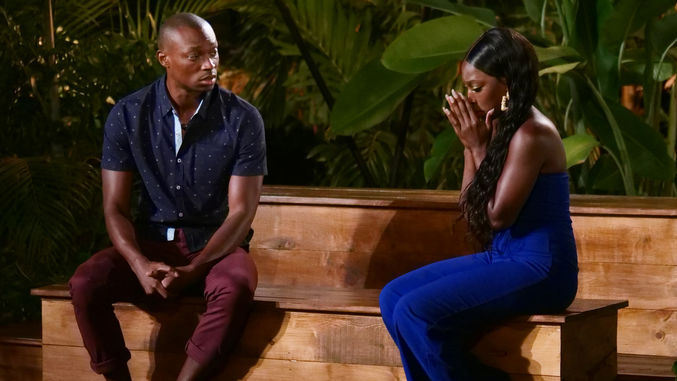 ‘Temptation Island’, the reboot, which is on its second season on USA Network, offers the right dose of guilty pleasure for the current commitment-phobic generation.

Across the episodes, we have witnessed the crazy moments, hook-ups, and dating frenzies of our favorite couples — Ashley H and Casey, Ashley G and Rick, Esonica and Gavin, and Kate and David, while facing the scrutiny of their host, Mark L. Walberg.

Season 2 has spanned 10 tantalizing episodes to date. The finale was divided into two parts (with the first part airing on December 12, 2019), and the channel saying that the stories are too spicy to be covered in one episode. Spiced-up yet? Let’s now take you through what you can expect from part 2 of the finale or season 11.

Temptation Island Season 2 Episode 11 Release Date: When Will It Premiere?

‘Temptation Island’ Season 2 Episode 11 is titled ‘The Final Bonfire – Part 2’, which decides which of the participants end up together and who are left loveless. Episode 11 is slated to release on Thursday, December 19, 2019, at 9 PM ET.

What’s more? It will be followed by a reunion special that airs at 10 PM ET, exactly after the concluding episode.

‘Temptation Island’ airs on USA Network every Thursday at the 10 PM ET slot, with the second part of the finale airing at the 9 PM ET slot. So, you can watch all the episodes if you have a cable connection. Additionally, you can also binge-on all the aired episodes online via a cable-free live television streaming service.

Watch the latest episode easily on your phone, computer, or tablet, using FuboTV, or Sling TV. All of these platforms offer the USA Network as part of the channel bundle.

The first part of the finale or episode 10 follows all of the couples who have come back from their overnight dates. First, we meet Rick and Ashley G, who are totally in doubt about their relationship and discuss their issues with host Mark. Next, Kate and David also appear to have a final conversation about their relationship.

On the other hand, Kareem advises Esonica to make her decision based on her personal growth. Kate appreciates Dom for his support while Ashley H confides in Ben that Casey won’t be able to lure her with sweet talks anymore. Rick tells Medinah that she will always be a friend whereas Gavin thanks Payton for helping in his evolution. Rachel encourages Casey and David tells Toneata all he wants is to concentrate on the bonfire with Kate.

At the bonfire, Rick confesses the ups and downs of his entanglement with Medinah and tells Ashley that he has personally grown on Temptation Island. He says, “I learned now that I never really handled our conflict in the best way.” On the other hand, Ashley admits, “I figured I would understand what is next for us, and honestly I still really don’t.”

Mark gives Ashley three choices: “leave with Rick, leave with someone else, or leave alone.” She has a detailed heart-to-heart talk with Rick, who tells how her romance with KB left him really hurt because of which he moved ahead with Medinah. However, Rick finally decides to forgive Ashley and they leave the island as a happy couple.

Next, we meet David and Kate. The former has allowed himself to be more emotionally expressive now, saying, “I did become more emotional. Unfortunately, it wasn’t with Kate.” Even Kate admits having truly discovered her true self on the island. She added, “I feel like I know more than ever exactly what it is that I want, I know my worth, and I know what I deserve. And you’ve helped me to see what I don’t deserve.” She then proceeds to criticize David for all his actions and brands him as selfish and a coward.

David replies by describing his faults on the island, to which Kate replies: “You don’t have to tell all of America that you just whored yourself out.”

As you might have already guessed by now, episode 11 or part 2 of the finale is all set to focus on the last two couples — Ashley H and Casey and Esonica and Gavin. While Estonia has almost made up her mind to go with Kareen, Gavin is equally hell-bent on getting her back. A similar scenario takes center stage in the case of Casey and Ashley H.

But still, although we may think that the final outcomes are almost expected, there are shockers. Ashley H said that the final bonfire “is definitely going to shock some people.” Esonica added, saying, “fans can expect to feel all the emotions that we are feeling and take a ride on a very emotional rollercoaster.”

So tune in to episode 11 this coming Thursday and watch it all unfold before your eyes!