Will There be a Ten Days in the Valley Season 2? 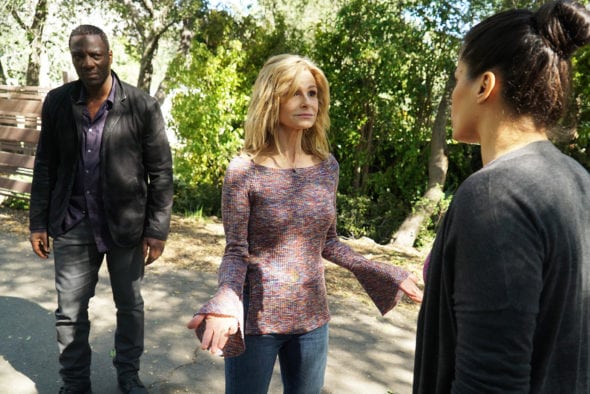 Drama deals with the non-humorous narration of a serious story. The genre has been particularly popular on television for the past few decades with many popular shows such as Game of Thrones, The Wire, and Breaking Bad falling in the category.

Ten Days in The Valley is one such attempt in which mystery and crime combine to bring magic on screen. It is an American television series that premiered in October 2017.

The series is created and developed by Tassie Cameron. Cameron is a Canadian screenwriter who is the head writer of a famous ABC Series Rookie Blue. She has even won a Gemini Award for Best Writing in a Dramatic Series. Filmed in Hollywood, California, Ten Days In The Valley is a highly esteemed project from the network.

The first season of the show was well-received. Now, the question arises: will there be a Ten Days In The Valley season 2? We will delve into that question, but first, let’s quickly look into the details of the series.

Ten Days In The Valley Cast: Who is in it?

Kyra Sedgewick is the lead and plays the central figure in the show. She stars as Jane Sadler, a mother trying to cope with a trying situation while attempting to maintain a balance between her work and personal life, which revolves around her daughter. Kyra Sedgwick is best known for the critical appreciation she earned for the Emmy Award-winning television series Miss Rose White.

Adewale Akinnuoye Agbaje plays another leading role. He portrays the character of Detective John Bird. Adewale is best known for his roles in movies such as Oz, The Bourne Identity and Thor: The Dark World.

Other than these two stars, Erika Christensen is seen starring as Ali Petrovich, the headstrong younger sister to Sedgwick’s Jane Sadler. She has previously starred in Michael Jackson’s music video, Childhood.

Abigail Pniowsky Lake Sadler-Greene, who plays the daughter of Jane Sadler, completes the primary star cast for the series. Abigail Pniowsky worked as a child actor before joining the cast of Ten Days In The Valley. She gained fame for her role in the Oscar-nominated movie, Arrival.

Ten Days In The Valley Plot: What is it about?

Ten Days in the Valley is a drama revolving around a television producer, Jane Sedler, whose young daughter goes missing in the middle of the night. Jane is separated from her husband Pete Greene, has a demanding career and is a single mother, who is now taking care of her young daughter. She is currently at her breaking point and is also suffering from depression. If it wasn’t already stressful before, Jane finds her life turn upside down when her daughter suddenly vanishes.

Life starts to unfold in the form of a mystery before her. Jane begins to distrust everyone in her family – all her friends, co-workers, find a place on her list of suspicion. Her first suspect is her ex-husband, who is fresh out of rehab and not happy with the current custody agreement of his daughter, Lake.

The story moves forward with Jane trying to find clues about her daughter and Pete, blaming Jane for not being a responsible and ideal mother and others lining up around her to tell her what to do. Bird, the police detective, also comes to find about the illegal stuff Jane used the night her daughter was kidnapped when he discovers a bag of cocaine in his investigation.

It is a typical drama where a mother goes to great lengths to save her daughter while trying to maintain a healthy relationship with her child. The show keeps on shifting suspicion, which makes you consider one person to be the abductor but then again, the next episode ends up pointing to another person. Each installment depicts another day of the investigation. The ending seems a bit hurried as they keep dropping shock bombs and making revelations to unveil the mystery. It feels as if the series is withholding information, as though it is an attempt to take the audience hostage, too.

Ten Days In The Valley Season 2 Release Date: When will it premiere?

The show earned a lot of praise for the way it deals with a myriad of emotions deftly and puts forward a lot of different ideas. However, the series failed in attracting an audience due to its ineffectiveness in drawing consistently from the seriousness of the story. Ten Days also struggled with timings, having being alotted the 10:00 p.m. Sunday slot. On October 1, 2017, it was moved from its time slot and replaced by Shark Tank. Reportedly, it was the lowest-rated series of Fall 2017, leaving ABC with enough reasons to finally pull the plug.

Although Cameron had hinted at the existence of a follow-up, and her fellow producer Marcy Ross had flat-out confirmed their plans for the second batch of episodes, it was made clear by the network later on, that the series will not see a second season. As of date, Ten Days in the Valley season 2 stands cancelled.

Ten Days in the Valley Trailer