Will There be a Tender Touches Season 4? 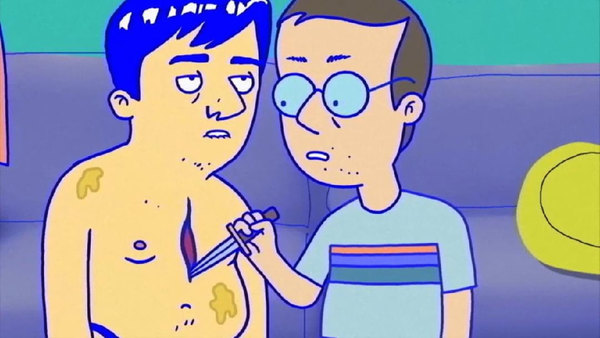 Adult Swim, known for its quirky take on animated shows, surpassed expectations when it launched ‘Tender Touches’. Created as a parody of soap operas, this partly musical series is based on a segment from ‘Bloodfeast’. Helmed by a talented duo of creators, Dave Bonawits and Maxime Simonet of ‘FishCenter Live’ fame, the show splits each episode into two parts — a regular and a musical section. The episodes are packed with improv and humorous fourth wall breaks.

‘Tender Touches’ brings forth the ideal mix of childhood fun and adult humor while being infused with the perfect dosage of offbeat, disturbing, and hilarious quips. The show, which has spanned three seasons to date, concluded with its second installment in 2018. With a massive gap following season 2’s finale, it then made comeback on tv screens with its third iteration in June 2020. Well, if you wish to know more about its future, read on!

‘Tender Touches’ season 3 premiered on June 16, 2020, on Adult Swim. It ended with its fifth episode on June 20, 2020. A look at the viewership and the numbers might have shown a slight dip but this is not a reason for concern. The show has successfully made a name for itself among the weirdest titles on the channel and hence, has its own loyal fanbase. We expect news of a renewal soon. Whenever that happens, ‘Tender Touches’ season 4 should premiere sometime in 2021.

Tender Touches Season 4 Cast: Who Can be in it?

David Bonawits and Max Simonet have jointly created ‘Tender Touches’. Actor and cinematographer Bonawits is best known for ‘Pleasant People’ and ‘The Allergic Reaction’. Actor and director Simonet is notable for his work in ‘Gemusetto Machu Picchu’, ‘Daytime Fighting League’, and ‘The Cry of Mann’. Bonawits lends his voice to Curtis while Simonet voices Steve in ‘Tender Touches’. Joining them in other voiceover roles are Bradley Millner as Charlene, Lauren Payne as Dr. Bismol, Rebecca Shenfeld as Axolotl, and Michelle Firestone as Michelle Milner. Stephanie Lennox and Sabrina Nichols are the voiceover stars for Verna and Michelle, respectively, in the ‘Operetta’. i.e the musical sections of the episodes. All of the above-mentioned stars should make their comebacks in a potential season 4.

Tender Touches Season 4 Plot: What Can it be About?

According to Adult Swim, ‘Tender Touches’ chronicles the various mishaps and adventures of the Cuylers, an “impoverished and dysfunctional family of anthropomorphic, air-breathing, redneck squids,” who reside in a rural Appalachian community in the state of Georgia. The sitcom embraces the classic trope, comprising disturbing humor and quirky dialogues, which is a staple ingredient in shows that air on Adult Swim.

Season 3 stays true to this ridiculous premise and brings in additional doses of brotherly love. For instance, the first episode sees “The Mendolsonn brothers get more than they bargained for at the Bradley family Shtimmer Bebik’ — as outlined by the channel. The finale ends on an apocalypse with Charlene making a comeback. Everyone is living in pyramids and most of humanity has left earth. Season 4 is expected to pick up the story from here and introduce some new twists, now that the brothers are doomed to survive on an inhabitable planet!