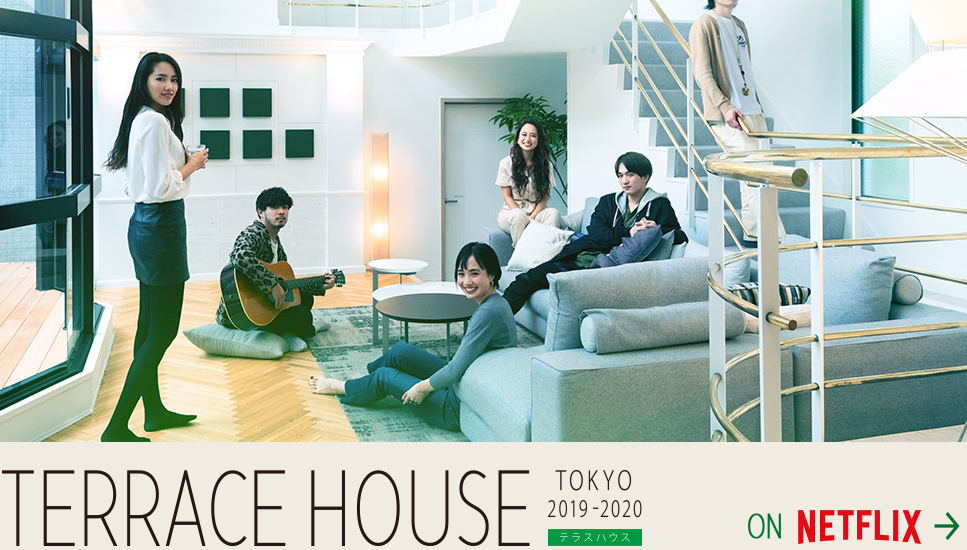 ‘Terrace House: Tokyo 2019-2020’ is the fifth installment from the popular reality series franchise from Japan, ‘Terrace House’. Co-produced by Netflix and Fuji Television, this Japanese show originally launched in 2012, with the title ‘Boys & Girls Next Door’. Bringing in a mix of ‘Big Brother‘ and ‘Gogglebox’ (a British series), it follows a group of strangers who live together inside a house. The episodes chronicle their actions as the members develop bonds, relationships, and get involved in conflicts.

After Netflix picked up the show for international airing, ‘Terrace House’ became a popular name in the West — especially for its calm and relaxed context — as compared to other reality shows, which usually showcase a lot of enhanced drama. In the fifth installment, the residents head to Tokyo for 2019-2020. Six strangers are sent to a striking house in Tokyo, where they look for love while sharing the same roof. With no scripts, whatever happens, is up to them.

The show has had two successful seasons to date. Now the question is, when will ‘Terrace House: Tokyo 2019-2020’ season 3 release on Netflix? Well, read on to find out.

As far as another season goes, you should know that Fuji TV had already finished airing season 3. It ended with its 12th episode on March 10, 2020. Now, we even have its global release date. ‘Terrace House: Tokyo Part 3 will release on April 7, 2020, on Netflix.

‘Tokyo 2019-2020’ stars Reina Triendl, Yamasato Ryota, You, Tokui Yoshimi, Babazono Azusa, and Hayama Shono as the main hosts. Vienna-born Triendl is a model and actress while Ryota is a comedian and member of the comedy duo “Nankai Candies”. Model, television personality, singer and actress, You, is a former member of the Japanese pop band Fairchild. Post that, she has also made multiple appearances on numerous tv shows and movies.

Participating as housemates in season 1 are an illustrator, a store clerk, a fitness trainer, a singer, and two aspiring actors. We meet the down-to-earth Kaori Watanabe, an illustrator for Fudge magazine. Next is model Shohei Matsuzaki, also an upcoming actor. Joining them is another actor Haruka Okuyama and musician Kenji Yoshihara. Rounding up the cast is trainer Risako Tanabe and the shy Ruka Nishinoiri.

While all the hosts return for season 2, we see some shuffling among the house members. Kenji says goodbye and we meet the new individuals — Peppe, Ryo, Hana, and Emika. In season 3, host Yoshimi is replaced by Japanese rugby player Yu Tamura. Haruka, Peppe, and Ruka will also be saying their farewells and we bet, they will be replaced by a couple of new entries in the upcoming season.

‘Terrace House: Tokyo 2019-2020’ takes viewers to Tokyo where a group of members resides in a sprawling mansion. While these strangers, from different backgrounds, get to know each other, they also seek romance and love. On this unscripted reality television show, the featured group consists of girls and boys, between 18 years to the early 30s — who land in a huge 3-story flat and experience the big city life for the first time. As the season progresses, we witness how these individuals pursue romance and sort out differences, arising from different personalities, morals, hopes, and dreams.

This reality dating show is set in a fully furnished house that provides access to camera-equipped cars. Nobody is constrained to spend all 24 hours within the walls. They can attend the daily demands of their regular life. However, cameras and crew often follow them to locations including their workplaces, restaurants, or any other outdoor place. If anyone decides to leave the show, he/she is replaced by another person from the same gender.

A team of studio commentators sets the premise for each episode and narrates the events alongside watching with the audience. They also give intermittent commentaries, analyze the conversations and body language, and make their own jokes depending on the featured footage. The show generally begins with the housemates first getting to know each other, checking out their bedrooms, revealing dating preferences, and going out shopping for food.

Season 2, just like its predecessor, is packed with several surprises. Hana, after her fight with Emika, calls up Haruka and describes her feelings. Haruka is diplomatic and does not take anyone’s side. With Hana having to leave for Taiwan, Emika meets Ryo and they both set off to try some sushi in ritzy Ginza.

Even Peppe is making his own moves for love. He asks Haruka to accompany him to a fancy cocktail bar at the Shinagawa Prince Hotel. They meet and Peppe proposes but does not get a definite answer.

Season 3, when it premieres, will have a lot more to tell. We need to know about Haruka’s decision who is still confused if she should date Peppe or not. Since she is moving out, she is not sure if the relationship would be successful.

Peppe is dejected but his career appears to be finally having a promising start. We also want to know about Ruka, who we barely see in the episodes. With both of them also evicting the house in season 3, we need some definite conclusions.

And what about Ryo and Emika? Will their romance progress further after the date? Well, these are some questions that will need answers in season 3.

Throughout its run, ‘Terrace House’ has received positive approval ratings from fans, especially because of its different and more realistic take on the reality tv genre. It is not only an international sleeper hit but has progressed to gather a mass cult following across the years. It is appreciated for bringing “reality back to reality television”. The lack of exaggerated drama lends it a distinct, relaxed appeal. The friction between the house members, though minimal, are honest — reflecting minute personality differences and personal preferences. Subtle and devoid of “fame-hungry pseudo-human caricatures”, it is a heartfelt show that mirrors the humane side of people.

Head over to Netflix to check out the official trailer and all the previous episodes.