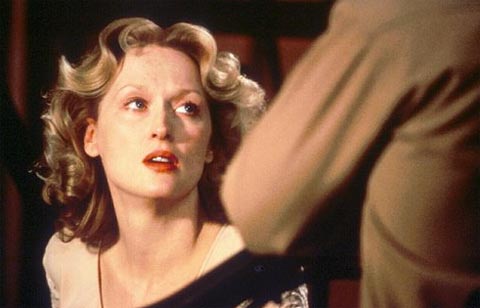 As the business changed with the collapse of United Artists in the days after Heavens Gate (1980), cinema changed in the eighties, and films became smaller, sometimes founded in a board room before there was even a script.

A woman emerged to become perhaps the greatest actor of all time, New Jersey gal Meryl Streep, who gave an astounding performance as the Holocaust survivor in Sophie’s Choice (1982), to this day still her greatest performance and to this day the greatest female performance in film history, maybe the greatest .. period. Streep dominated the decade, with an array of great performances, racking up the Oscar nominations along the way, and by 2014 had nineteen nominations, far more than anyone.
New exciting actors emerged but the best of the decade seemed to be from seventies actors continuing their ways through the decade.

Eric Roberts was thrilling in Star 80 (1983), he and Mickey Rourke were remarkable in The Pope of Greenwich Village (1984), Jessica Lange stunned critics and audiences with her work in The Postman Always Rings Twice (1981), Frances (1982), Country (1984) and Sweet Dreams (1985), while Sean Penn made a mark in Fast Times in Ridgemount High (1982), Bad Boys (1982) and At Close Range (1986), to name a few. And from Britain came a new breed of actor, method actors, who had fallen in love with the A American way and bade farewell to Olivier.

Daniel Day-Lewis, Gary Oldman, Emma Thompson, Bob Hoskins, Helena Bonham Carter, and Kenneth Branagh exploded out of Britain with some extraordinary performances and have continued that legacy in the years since. Day-Lewis in fact might be the greatest living actor at this point in history.

THE TEN BEST OF THE EIGHTIES: