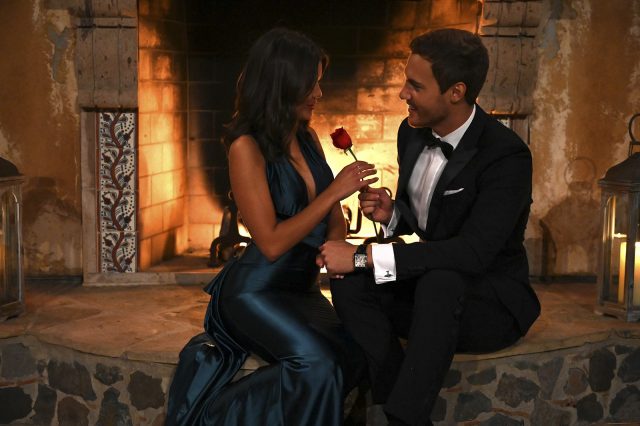 The 24th season of The Bachelor premiered and left off last week with multiple unfinished storylines. Hannah Brown is back and she harbors unresolved feelings for Peter Weber. Some of the privileged ladies go on a group date, a few are eliminated, and others are penning their own sex stories — wondering WTF is happening! What would happen if Peter decides to leave everyone hanging and run off with the gorgeous ‘Dancing With The Stars‘ alum?

This week, the drama commences from here — with some blondes in tears and one rose ceremony. And there are tons of twists. Have you watched it yet? If yes, you must be in jitters and impatiently waiting for what the next week holds for fans. To calm your nerves, just a bit, welcome to our section that contains all the details of The Bachelor season 24 episode 3 and a short recap of episode 2.

When is The Bachelor Season 24 Episode 3 Release Date?

Where to Watch The Bachelor Season 24 Episode 3 Online?

You can watch the latest episodes of The Bachelor by tuning in to ABC at the above-mentioned time slot if you have a cable subscription for the channel.

If you don’t have a cable connection, then you can also watch The Bachelor season 24 episode 2  online on the official ABC website or the ABC app. You can also tune in without cable through YouTube TV or Hulu Live TV if you have their paid subscription.

After the major champagne fiasco in episode 2, we will definitely witness more fights between Hannah Ann and Kelsey about this issue. Reality shows do have this norm of bringing up the pettiest of problems in order to keep the drama running. It has also been confirmed that  Demi Burnett from ‘Demi’s season of The Bachelor’ will be making a comeback in episode 3.

In fact, episode 3 brings in just too much of tears; it seems the ladies are in for a crying competition, like who can shed the maximum tears. On a brighter note, there’s a trip to Costa Rica, hoping that the crew will open up to new beginnings — with a couple of hot beach and hotel room scenes to add! Peter’s parents also make an appearance and wait, we even get to witness a few slaps (no, not virtual – for real!). Catch the full preview below:

Well, there’s yet another thing. Host Chris Harrison informs Peter that Kelsey’s doubts were right — Hannah Ann really did open Kelsey’s champagne on purpose. Now that Peter knows, how will he react? Tune in next week to watch the heated drama unfold!

Let’s begin with the question that is in everyone’s mind — Hannah Brown. Well, the second week reveals that Hannah and Peter are still romantically inclined to each other. A very conflicted Peter tells her: “You’re the one that said ‘no’ to me. I’ve never said ‘no’ to you” — to which Hannah replies: “I don’t know if I made the right decision with you.”

But Peter realizes that it’s not fair to jeopardize things up in the midst of a contract, which requires him to be on the show. Hannah leaves and Peter informs the ladies that he cannot go on with the first portion of the group date since his mind is so stressed. However, he does attend the group date, which takes place in the nightly hours and gives his rose to Sydney.

Next, there’s a cocktail party where Peter gifts Madison a photo of the two of them taken during last week when they had attended his parents’ vow renewal ceremony. Another notable development here is the fiasco regarding the champagne bottle bought by Kelsey, who had kept it for a special occasion — only to be opened by Peter and Hannah. When Kelsey discovers, she immediately breaks down into tears. However, Hannah tries to convince her that it was an unintentional mistake.

In the rose ceremony, both Hannah Ann and Kelsey receive roses while Courtney, Lauren, and Payton pack their bags and go home. The second group date, courtesy Revolve, requires the girls to don Revolve outfits and walk the ramp. Judges are Carson Kressley, Janice Dickinson, and Raissa Gerona. The winner is Hannah Ann since she is a professional model and she gets the entire Revolve closet as her prize.

Victoria F., who ends up in second place, confesses to Peter in the after-party that she is totally unsure of her journey, prompting Peter to give her the rose. The group date also brings up the champagne issue yet again. Well, this is how episode 2 concludes. The end!