Fame is a treacherous thing. People can do anything to get it, and once they have it, they’ll do even worse things to have it forever. Fame can be a corrupting force, and the worst part is that it mostly affects the good lot. Now, let’s take the danger a notch higher and imagine that the ones who are supposed to protect us have been degraded by our own love and reverence? What if, the superheroes we admire, whom we have put on a pedestal to the point that we have allowed them to think that they might as well be the gods of our world, have turned into villains just because of that?

Who is supposed to save the world now that the saviours have been degraded? ‘The Boys’ introduces us to such a scenario. It is based on the comic book series of the same name, written by Garth Ennis with design and illustration by Darick Robertson. It has been adapted for Amazon Video by Eric Kripke (‘Supernatural’), Evan Goldberg and Seth Rogen. Goldberg and Rogen have previously collaborated on another adaptation of Ennis’ comic book series, ‘Preacher’. ‘The Boys’ is executive produced by Ennis, Robertson, Kripke, Neal H. Moritz, Ori Marmur, Pavun Shetty and James Weaver. The production companies involved are Sony Pictures Television, Amazon Studios, Point Grey Pictures and Original Film.

The Boys Cast: Who’s in it? 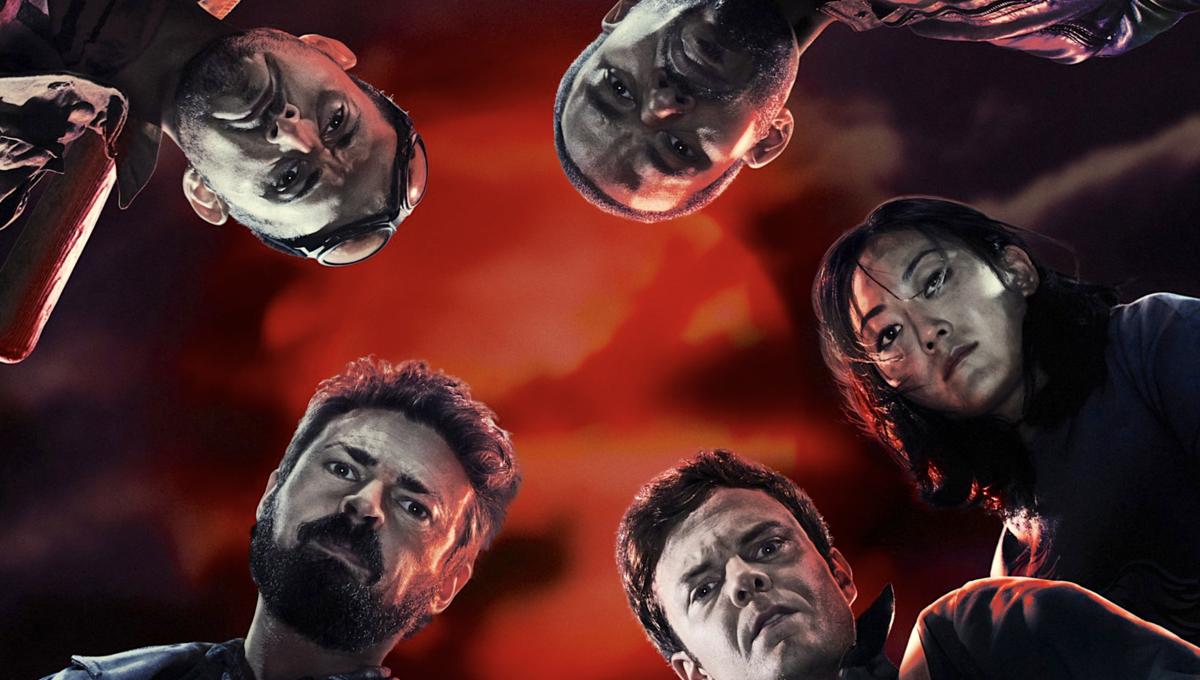 The cast of ‘The Boys’ is led by Karl Urban who plays the role of Billy Butcher, the leader of The Boys. Urban is known for working in ‘The Lord of the Rings’ series, ‘Star Trek’ series and the ‘Riddick’ series. He has also appeared in ‘Red’, ‘Priest’, ‘Dredd’, ‘Thor: Ragnarok’ and ‘Almost Human’. Elisabeth Shue plays the role of Madelyn Stillwell, the one who oversees the Seven and is one of the primary antagonists of the show. Shue is an Academy Award-nominated actress known for her roles in ‘The Karate Kid’, ‘Battle of the Sexes’ and ‘Back to the Future 2 &3’. Laz Alonso appears in the role of Mother’s Milk, a man inflicted with an unusual necessity to keep himself alive. He has worked in ‘Avatar’, ‘Detroit’ and ‘Fast and Furious’.

Jack Quaid (‘The Hunger Games’) plays the role of Hughie Campbell, whose girlfriend is killed by a superhero. Karen Fukuhara (‘Suicide Squad’) plays the role of Female, an otherwise volatile woman suffering from selective autism. Tomer Kapon (‘When Heroes Fly’) appears as Frenchie, a violent member of the team with a penchant for speaking French, albeit wrongly. The role of Annie January/Starlight, the newest member of the Seven, is portrayed by Erin Moriarty. She is known for working in ‘Captain Fantastic’, ‘Jessica Jones’ and ‘True Detective’. The cast also includes Antony Starr as The Homelander, Dominique McElligott as Queen Maeve, Jessie Usher as A-Train, Chace Crawford as The Deep and Nathan Mitchell as Black Noir. Jennifer Esposito and Simon Pegg also make an appearance on the show.

The Boys Plot: What’s It About? 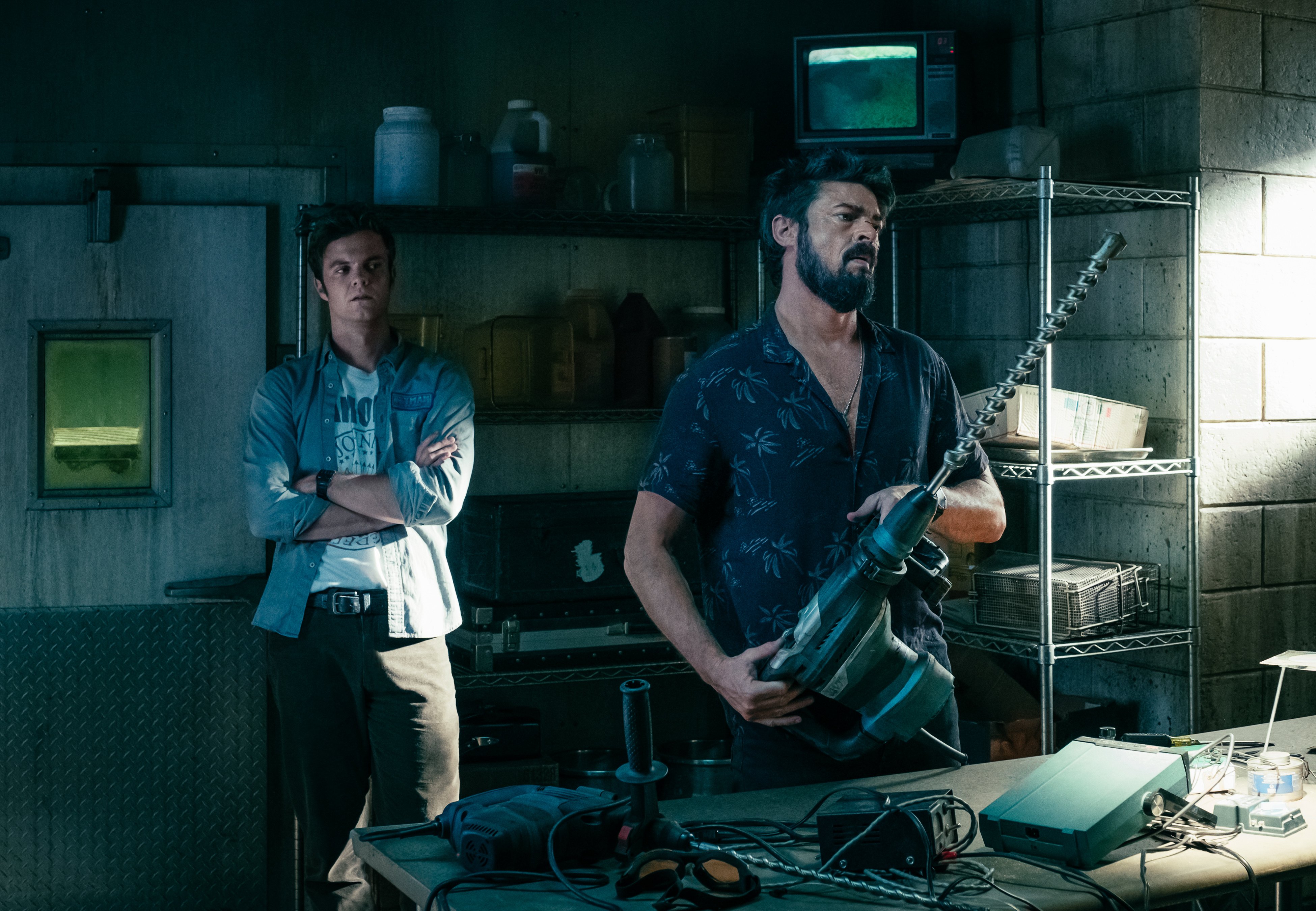 Everything is showbiz in today’s world. Every act is committed to making a profit, to keep up appearances, to fool the public into believing that they are safe when they are actually being duped. ‘The Boys’ adds a layer of fiction to this bleak truth and introduces us to a society where superheroes exist. Only, they are not the selfless and ready to sacrifice themselves for the good of mankind type. They have attained a celebrity status where people literally worship them. This has made them morally complacent, and feeding their ego is a multibillionaire conglomerate that wants to use them to make more money.

The saving of the world is now staged so that it can be cashed upon, and the superhero and the conglomerate take all the profits while crime runs rampant in the streets. What makes it worse is that believing themselves to be invincible forces, the heroes have now turned into villains, from disturbing the peace of society and to even leading to the death of the citizens.

The government, or at least, the CIA knows that they need to be checked. They can’t be allowed to believe that they are gods and can do whatever they want. But they can’t be openly handled. The public can’t know about it because somehow, they are still the heroes. The conglomerate has successfully maintained their good image. This calls for a covert team that isn’t disillusioned by the charm of the heroes and is highly trained to be able to use brute force to keep them in check. The Boys is that team, ready to confront and contain the threat of the Seven, the superheroes.

The Boys Season 2 Release Date: When Will it Premiere?

‘The Boys’ Season 1 premiered on July 26, 2019 on Amazon Prime. With a set of eight episodes, the series serves as a satire of the superhero genre. Its implications further expand as the series also presents a political commentary, which resonates with the current scenario of world politics. The comic series, which already has a legion of fans, helped the show quickly get a lot of attention. Moreover, how can you ignore Goldberg and Rogen?

Just like us, Amazon knew that the series would resonate with the audience. On July 19, 2019, Amazon announced that the show will return for a second season. The additional casting was also announced for the next season. Aya Cash is set to join the series as Stormfront, a neo-Nazi superhero. This character is actually a man in the series. How the showrunners deal with this gender swap would be an interesting thing to look forward to. As far as ‘The Boys’ Season 2 release date goes, we expect it to be sometime in July, 2020.

All episodes of ‘The Boys’ season 1 can be seen on Amazon Prime. While we wait for season 2, why not refresh your memories  quirky season 1 trailer.