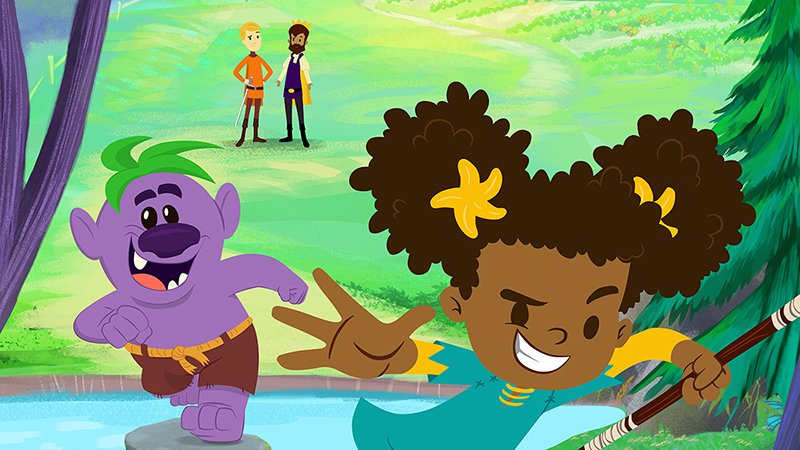 ‘Arthur’, the popular educational kids’ show on PBS, faced quite some backlash when it featured a same-sex wedding, between Mr. Ratburn and his gay partner, in season 22. As media and the entertainment world began discussing the lack of LGBTQ visibility in G-rated programming, Hulu came up with its own version of a forward-thinking, animated, LGBTQ-themed series. With an aim to include more inclusive storytelling for every section of society, ‘The Bravest Knight’ is a children’s cartoon, which is one among the first kid-centric shows to openly feature a gay couple.

An adaptation of the famous children’s book by Daniel Errico, namely, ‘The Bravest Knight Who Ever Lived’, the show is about a pumpkin-farmer-turned-knight, who is married to the prince of his dreams (literally), and the pair together raise their 10-year-old adopted daughter, Nia.

The Bravest Knight Cast: Who is in it?

The Bravest Knight Plot: What is it about?

‘The Bravest Knight’ introduces us to a mixed-race family, which comprises the happily married same-sex couple, Sir Cedric and Prince Andrew, and their daughter Nia. The tale is about Nia’s journey where she endeavors to become a daring knight while listening to the stories from her father, who was formerly a day-time, pumpkin farmer but is now a full-fledged knight. With two very supportive dads, Nia is a lucky 10-year-old. She gets inspired by the tales of perseverance and passion from Cedric’s childhood. Nia learns important values, including honor, justice, and compassion, when she listens to her father. She gradually understands that knighthood is not only about slaying dragons. It involves much more.

For example, in one of the episodes, the not-yet-knight Nia takes a training session from Cedric on “the proper ways to attempt a tower rescue.” During the narration, we see Sir Cedric recounting the first time he met his troll friend, Grunt, and managed to escape the clutches of an evil witch. ‘The Bravest Knight’ entwines three very important social issues — LGBTQ visibility, child adoption, and interracial relationships — and highlights them through kids’ programming. Incorporating educational elements and values, it is a novel attempt from Hulu to emphasize the healthy growth of the current youth, especially children. Since they belong to the same world that we live in, they need to know about its real scenario. Only then they would be able to understand that everybody deserves love, support, and acceptance. If they don’t learn about such issues during their childhood, they would not understand these things once they grow up.

The Bravest Knight Season 2 Release Date: When will it premiere?

‘The Bravest Knight’ Season 1 premiered on Hulu on June 21, 2019. The first five episodes aired on the same date, followed by additional episodes later on October 10, 2019. If you did not know already, an animated short film for ‘The Bravest Knight’ was previously released on Hulu in 2015. Owing to its wide acceptance, it was extended to a new, full-fledged series.

According to Hulu, “The Bravest Knight continues Hulu’s commitment to connecting with kids and families through bold approaches in storytelling, and continues to be a supporter of LGBTQ content and creators.” If you note the trend, the appearance of LGBTQ characters in animated and family-oriented movies since 2018 is extremely rare. Hence, with accommodating platforms like Netflix and Hulu, there’s a chance to highlight these communities in a better manner.

Next, will there be The Bravest Knight season 2? We have not received any official update yet. However, you would definitely agree when we say that this unique animated series does come with a promising premise. Therefore, we would not be surprised if Hulu does decide to go for another installment soon enough. If renewed, you can expect ‘The Bravest Knight’ Season 2 to premiere sometime in June, 2020.

Here’s the official trailer for ‘The Bravest Knight’.