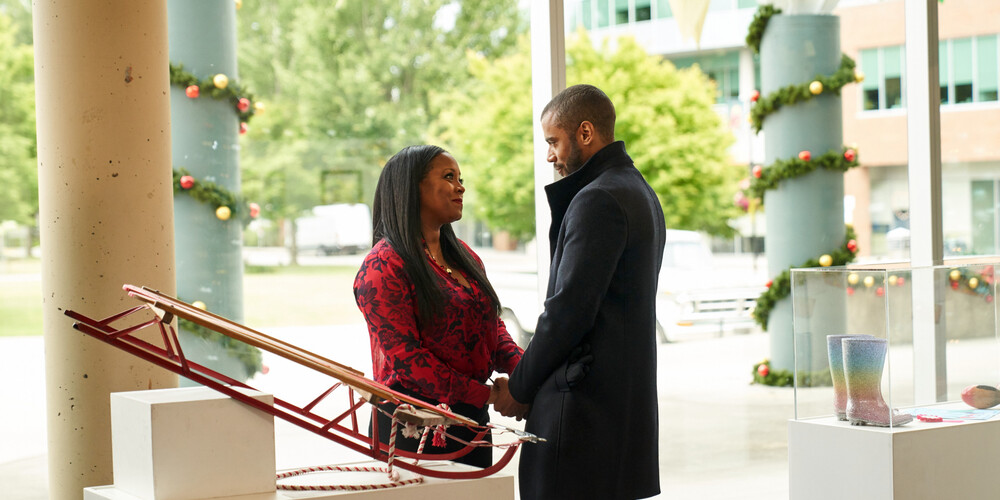 ‘The Christmas Aunt’ is a Lifetime Original film about a woman trying to restore her young niece and nephew’s faith in Christmas and finding love along the way. Rebecca Miller goes home to Nashville, Tennessee, fifteen days before Christmas, to babysit her niece and nephew as their parents go away on a trip. She wants to revive the kids’ Christmas spirit and their belief in Santa, so she indulges them and gets them involved in several Christmas-themed activities.

Unexpectedly, Rebecca also runs into her childhood best friend, Drew Edwards, and the two reconnect over “12 days of Christmas” (something they enjoyed doing as kids). Long-buried feelings bubble to the surface as they spend more and more time together, trying to make it a memorable Christmas for the kids. Curious to know where ‘The Christmas Aunt’ was filmed and who is in the cast? We have got you covered.

‘The Christmas Aunt’ is set in Nashville, Tennessee, but filming was done entirely on-location in Canada, in the Hollywood North. Here are more details about the exact filming location of this film.

‘The Christmas Aunt’ was filmed in Vancouver, principal photography completed in late July 2020. During the on-going pandemic, filming was challenging as the cast and crew had to isolate and follow other social distancing guidelines while shooting. The actors and the crew also had to be tested for COVID-19 before they commenced filming.

Vancouver is popularly known as Hollywood North because it is one of the most favored filming locations for Hollywood movies and TV shows. A few of the most popular films to have been filmed in Vancouver are ‘It’, ‘It: Chapter Two’, ‘Deadpool’, and ‘Titanic‘. Vancouver is most used for shooting TV shows that feature dark, foliage-covered locations like ‘Supernatural’, ‘The 100‘, ‘Lucifer’, ‘The Vampire Diaries‘, ‘Haunting of Hill House’, ‘Haunting of Bly Manor‘, and ‘Once Upon a Time’.

‘The Christmas Aunt’ features a small cast of talented actors. There are only four leading characters, with Nyla Alleyne playing Rebecca’s niece and Gabriel Jacob-Cross playing the little nephew. Keshia Knight Pulliam plays the titular aunt, Rebecca. She is most famous for playing the role of Rudy Huxtable in the popular 80s’ NBC sitcom ‘The Cosby Show.’

More recently, Keshia has been seen as Miranda Lucas Payne in ‘Tyler Perry’s House of Payne.’ Jarod Joseph of ‘The 100’ fame portrays the role of Drew Edwards. Previously, he has also appeared in ‘Once Upon a Time’ and ‘Arrow’.

Read More: On the 12th Date of Christmas: Filming Location and Cast Details