Where Was ‘The Circle’ Filmed?

‘The Circle’ is a dystopian tech reality show that follows eight contestants living in the same building but different apartments. They are aware of each other’s existence but are restricted from communicating face to face. The only way they interact with one another is via their social media profiles generated through an app called The Circle.

The contestants can either be themselves or choose an altogether different identity to participate. The one who survives elimination, and stays at the top of the influencer (popular) table, takes home a cash prize of $100,000.

The hardest part about a reality show is not getting on, but to survive. It is easy to get fooled by the unique concept and elegant well-stocked apartments, but what one oversees is the determination and patience required to stay confined at an isolated location with absolutely no familiar face around you.

But where are the contestants holed up? You may ask. Well, here’s everything we know about ‘The Circle’s’ ambiguous filming location.

While the producers have kept the exact location of the show under wraps for security reasons, the giant neon circle on the face of the building gives it away to the people passing by. The illuminating structure for the American version of ‘The Circle’ is situated in the United Kingdom. Read on to know the details of the embellished filming location! 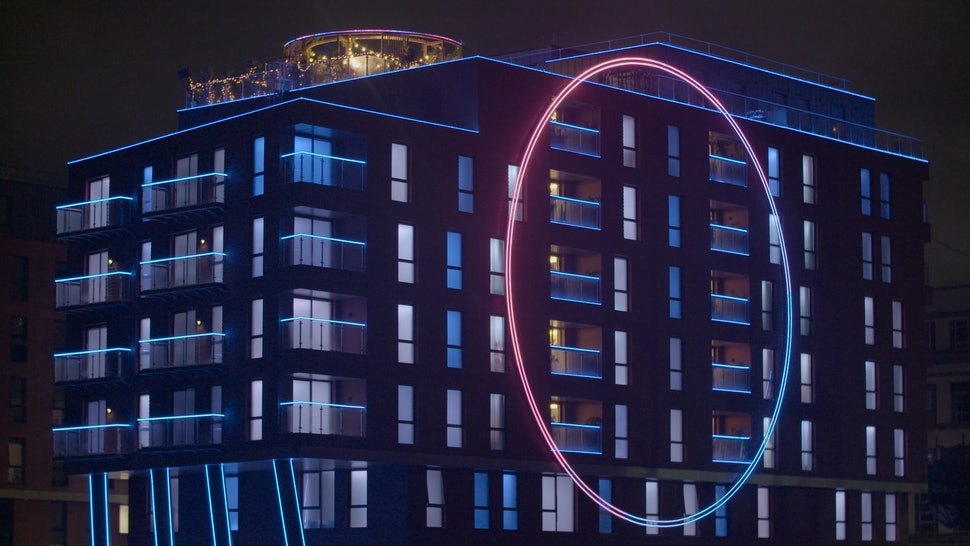 ‘The Circle’ had extensively been shot in studio apartments of a residential development called the Adelphi Wharf, in Salford, Greater Manchester. Situated at the foot of the River Irwell, Adelphi Wharf is a new block comprising 580 developments, close to Manchester city center.

According to reports, Studio Lambert has rented the house on lease from the company that launched Adelphi Wharf development – Fortis Developments and Fortis Residential Lettings.

The apartments, which served as a filming location for ‘The Circle,’ have a bland and modern design, but the production unit of ‘The Circle,’  jazzed it up with swanky objects so they can look fantastic on screen.

Each refurbished apartment had been decked with plush upholstery, contemporary furnishings, posh kitchen appliances, and plenty of house plants. The temporary homes of the contestants were layered with vibrant colors, favoring a tropical theme (like using a rain-forest wallpaper), including wide windows, and a spacious living room with wooden flooring.

The rooftop terrace was decorated with flowers, and had a Jacuzzi, a yoga room, and a well-equipped gymnasium. Of course, the makers fixed a large television at the center of every room.

The contestants stayed in a flat that has a one-bedroom, kitchen, bathroom, and a double bedroom. If you go to buy the same ones, it will cost you around $1,92,400. Before you begin planning, let us tell you that all the flats have already been sold. Sorry.

But hey, don’t stop scouting the highly sought-after area of Salford. It is possible that something similar to the studios used in ‘The Circle’ might catch your eye.