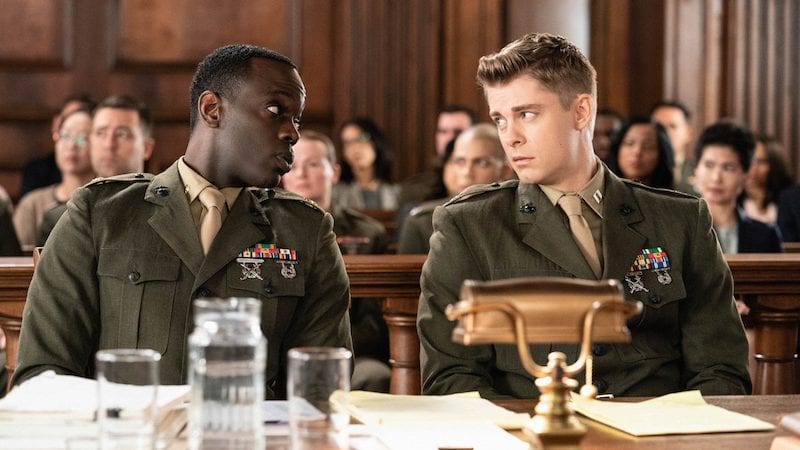 ‘The Code’ is a procedural drama series created by Craig Sweeny and Craig Turk that airs on CBS. The show is familiar territory for the network in the wake of the naval justice franchise ‘NCIS’. News of this CBS drama first emerged on February 2,2018 when it was reported that CBS had given the production a pilot order. Production companies originally linked to the pilot included CBS Television Studios and Timberman-Beverly Productions. Subsequently, on February 8,2018, it was announced that Marc Webb of ‘The Amazing Spiderman‘ fame had come on-board to direct the pilot episode. CBS confirmed the series order on May, 11, 2018, and went on to announce a few days later that ‘The Code’ would premiere in the spring of 2019 as a mid-season replacement. This marks the second pilot collaboration between Sweeny and Webb to go to series, following CBS’ ‘Limitless‘.

In CBS’ initial press release the series was summarized as “military’s brightest minds take on our country’s toughest challenges inside the courtroom and out, where each attorney is trained as a prosecutor, a defense lawyer, an investigator-and a Marine.” Though the show aspires to be an introspective look into the lives of the military’s brightest legal minds in its inception, what it eventually ends up being is a formulaic drama in the comfort zone of CBS and its large target audience.

The Code Cast: Who’s in it?

‘The Code’ went through a tumultuous casting process at best and a major casting crisis at worst. In the original pilot, Dave Annable and Mira Sorvino were cast as the series’ male lead, and a major co-starring role, respectively. However, by the time the show was picked up by CBS, the two had backed out resulting in an immediate recasting of Luke Mitchell in the role of Captain John ‘Abe’ Abraham (Annable), and Dana Delany in the role of Colonel Eisa Turnbull (Sorvino). The show features an ensemble cast including Anna Wood (playing Maj. Maya Dobbins), Ato Essandoh (Maj.Trey Ferry), Phillipa Soo (Lt. Harper), Raffi Barsoumian (Lt. Harper) and Justin Cotsonas (Alex Hunt), among others.

The Code Plot: What is it about?

The central premise of the show lies in its attempt to delve into the usually unheard aspects of military life and the traumas that go along with it. However, the upbeat, superficial treatment of the narrative, makes the show a shallow attempt at the same. Lurking in the same territory as some of CBS’ recent productions, ‘The Code’ does little to establish itself as a serious procedural drama, with lawyers within the Marine Corps being shown as driven by the motivation to close out the cases swiftly, than a passionate advocacy for its clients. Dana Delany’s portrayal of girl-boss Colonel Eisa Turnbull is a typical performative attempt often bordering on presupposed Hollywood cliches– she is seen saying dialogues such as “I’ve ordered better men than you to their deaths”. In another instance she tells one adversary “I will end you on my way to yoga.”

Operating out of Judge Advocate General Headquarters in Quantico (Virginia), the active duty Marine attorneys have chosen to serve their country in pursuit of military justice at home and abroad, often having to put aside their ideals for the sake of the truth. With Capt. John Abe and Capt. Maya Dobbins assigned to the case as prosecution and defense lawyers, the first episode titled ‘Blowed Up’ follows the legal procedure of a soldier who has allegedly murdered his commanding officer in Afghanistan.

The format of the show remains pretty much the same in the second episode, titled ‘P.O.G.’. When a Marine is charged with abandoning his post during combat, resulting in the deaths of three soldiers, Capt. John Abraham and Capt. Maya Dobbins squares off in the courtroom. Meanwhile, Maj. Trey Ferry must iron out a diplomatic spat, and Lt. Harper Li works to balance her duties to the Corps with planning her wedding.

The Code Season 2 Release Date: When will it premiere?

‘The Code’ season 1 premiered on April 9, 2019. Fans of military shows and war dramas appreciated the show but critics weren’t kind to it. Rotten Tomatoes sums up the critical feedback as “Despite its pedigree, The Code does little to differentiate itself in a crowded field.”

Unfortunately for the fans, on July 23, 2019, Dana Delany revealed to her fans that the show has been canceled.

Thank you to all you wonderful people who watched @TheCodeCBS. Last night was our finale and sadly, no more. I’ll never make General. But I loved this cast of stellar actors & know we’ll meet again. Semper Fidelis. 🇺🇸 pic.twitter.com/kqjcZBTRzo

Given the poor ratings of the show, it was always expected that CBS won’t renew the show. Normally, there’s always a chance of some other network picking up the show. In this case, though, we doubt that will happen. Still, if anything changes, we will update you about ‘The Code’ season 2 release date.

While we wait for any positive news on season 2, check out the season 1 trailer below. If you haven’t seen the show yet head over to CBS to catch all the previous episodes.