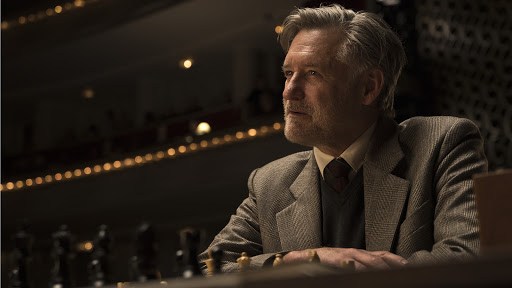 After surviving the catastrophe of the two World Wars, the most stressful time for the world came with the Cold War. The volatile relations between the countries were escalating by the day. The tension of this time is exploited by Hollywood time and again as movies of the premise. ‘The Coldest Game’ is another such film.

It follows the story of a mathematician who has left his glory days behind. Alcoholism has taken over his life. One day, he is forced to leave his directionless life to play the game that will not just change the course of his life but also decide the outcome of the war that his country is engaged in. He is pitted against a champion from the Soviet Union, which means that it is not just about playing a game with a sporty spirit. He absolutely needs to win it. While he engages in the match, his country grapples with the Cuban Missile Crisis, and it looks likes they might lose on both ends.

Co-written and directed by Łukasz Kośmicki, it stars Bill Pullman, who took over from William Hurt after he got injured, in the lead role. The thriller takes the protagonist from the comfort and safety of his home in America to the enemy territory in Poland. If you want to know how the crew managed to recreate the setting of the 60s, then we have the answer for you. Here are the places where ‘The Coldest Game’ was filmed.

‘The Coldest Game’ is set during the time when tension was escalating between America and the Soviet Union. The Cuban Missile Crisis seemed to be worsening, which made crossing over to the Iron Curtain a tricky, if not a dangerous, thing for anyone from the other side of it.

To capture the feeling of that tension and add that aura to the story, the crew of ‘The Coldest Game’ turned towards Poland. Warsaw served as the primary filming location for it. Of late, Poland has seen a surge in filmmakers finding their way to it. The country’s services, which are not just cheaper and better than its counterparts, have made it a popular place to film at.

The central plot of the story revolves around the chess match between the protagonist, Joshua Mansky, and Soviet champion, Alexander Gavrylov. It takes up the major portion of the film. These scenes have been filmed at the Palace of Culture and Science in Warsaw. While it is central to the story due to its Cold War theme, the place also holds an iconic status in Poland.

A gift from the Soviet Union, the skyscraper is the tallest building in the country, and one of the tallest in the entire continent. Featuring the Soviet-era architecture imbued with the hints of Polish culture, it is also an object of controversy. While some people consider it a reminder of the Soviet influence on Poland, others consider it a symbol of recovery from the war and its disastrous aftermath. No wonder it was chosen as the site to shoot the film that focuses on one of tensest times of the Cold War.

The location itself isn’t much help if you don’t get the vibe right. The tumultuous history and controversial present of the building weren’t enough to tap into the tension of the story. Set designer, Allan Starski, who has previously worked on Roman Polanski’s ‘The Pianist’ and has won an Academy Award for his work on Steven Spielberg’s ‘Schindler’s List’, went to great lengths to get the retro look of the 60s while keeping the thriller tone of the story.

Another place that becomes prominent in the story is the U.S Embassy. The CIA agents who force Mansky to play the game have their own jobs to take care of in the meanwhile. The crew found an empty building to serve as the set for the embassy. This place had once been a Gestapo headquarter in Poland.

Additional scenes were filmed at various outdoor locations which feature the snow-laden streets of Poland. Despite the biting cold, the crew pulled it off. “It was minus 14, but it was blowing,” commented Bill Pullman, who plays the lead role in the film.

It's a wrap! Thank you for the ride everyone @thecoldestgamemovie 🎬