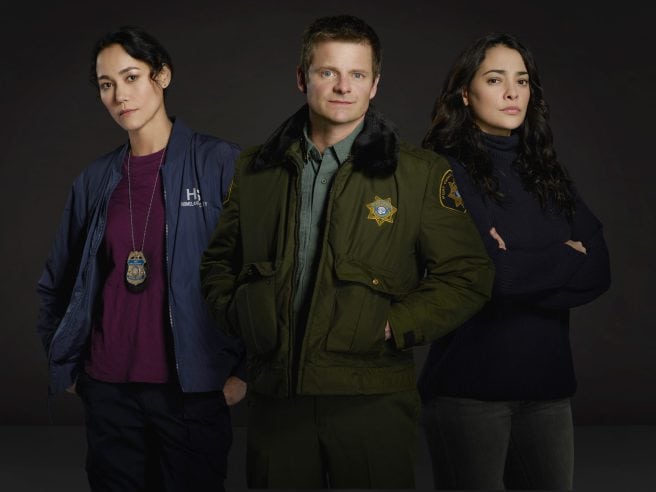 ‘The Crossing’ is an American thriller sci-fi TV show created by Dan Dworkin and Jay Beattie. The series airs on ABC and it first premiered on April 2, 2018. The show is about a group of refugees who are seen fleeing from a war-torn country in order to seek asylum in America. They try to pass themselves off as Americans since they want to rebuild their lives. However, things get a little complicated when it becomes evident that one of the refugees might have superpowers.

While the series has a decent fan following, it has not gone down too well with the critics, who have appreciated the way the show tries to have a complex plot structure, while pointing out that it loses out on a lot of audiences because the plot is too alienating to be enjoyed.

The Crossing Cast: Who is in it?

The Crossing Plot: What it is about?

It is not difficult to make out that something wrong is going on when refugees coming from a war-torn country start looking for asylum in a small fishing town in America. The natives of the town soon realize that the country they are trying to escape from is America, and the war from which they are trying to run away has not happened as of yet. While the government is trying to figure out the reason behind this migration, the truth cannot be hidden as the lives of those migrants is not going to be the same as before.

The basic plot of ‘The Crossing’ introduces us to Ellis, a small town sheriff, in the fictional town of Port Canaan in Oregon. He has to deal with the problem of a sudden influx of refugees. It is an unbelievable situation as the beaches get filled with those seeking asylum from what they claim to be Apex. We are soon made aware that Apex is a group of highly evolved humans who are targeting and eliminating anyone who is not like them. If this was not scary enough, the actual plot twist lies in the fact that these refugees are from America itself, but this is an America that is 180 years in the future. Complicating matters even further is the fact that some refugees appear to have superhuman powers.

There are obvious comparisons to ‘Lost’ which has been a seminal show, and the focus to mix science fiction with a survivor narrative seems to be a page out of their book. Notably, Dan Dworkin, one of the showrunners addressed this saying, “It’s nice to be grouped in with ‘Lost’. Obviously, it’s an important show, a seminal show for our generation. Then it’s kind of a curse because you’re being held up against something that’s so mightily regarded.” However, it must be said for ‘The Crossing’, that it does not take time to get to the core of the story. Once the bodies are discovered on the beach, some dead or alive, and all without lifejackets and no signs of a capsized vote, the sheriff realizes he is out of his depth, and the Department of Homeland Security or DHS is called in. Ren shows up and the story about the refugees becomes clear.

Variety has rightly pointed out that the show is full of mysteries:”‘The Crossing’ is certainly a show full of mysteries. It has fun crafting this make-believe future, slowly teasing out details through casual conversation (food is different in the future, for one), and then dropping the bigger bombs in a montage of interviews.” Notably, the fact that the refugees are from the future and speak of impending class divides, wars, and holocaust like situations is also a warning to the general public that there is time to save ourselves before we go down this road.

The Crossing Season 2 Release Date: When will it premiere?

‘The Crossing’ Season 1 premiered on April 2, 2018, and its final episode was aired on June 9, 2018. On May 11, 2018, the show was canceled by ABC as it had recorded low ratings as compared to the other shows which were running successfully on the channel, and also because the show was constantly being compared with the TV show, ‘Lost‘. Whatever the case may have been, the series was axed in its prime. However, the showrunners have assured fans that Season 1 was a self-contained season. Maybe the series will find a new home elsewhere.  If that happens, we will update you about ‘The Crossing’ Season 2 release date.

Here’s the trailer of season 1 to refresh your memories.