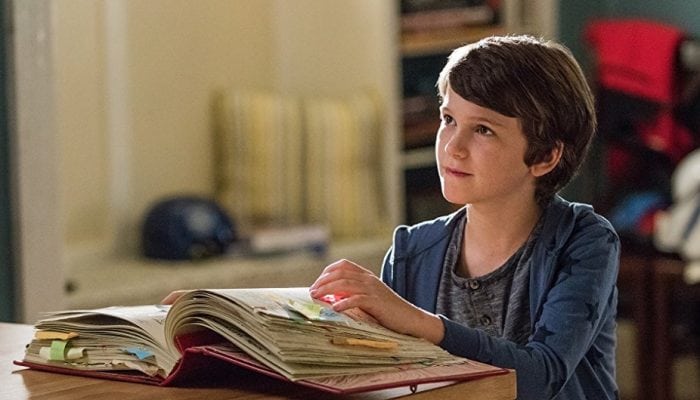 ‘The Dangerous Book for Boys’ is an American comedy-drama series that airs on Amazon Video and first premiered on March 30, 2018. It is based on the book of the same name by Conn & Hal Iggulden. The show has been created by Bryan Cranston, best known for playing Walter White on ‘Breaking Bad‘, and Greg Mottola of ‘Arrested Development‘ and ‘Superbad‘ fame.

The book itself is recommended for boys from the age of eight to eighty, and it helps to bring to life the McKenna brothers, who are in grieving due to their father Patrick’s passing away. Patrick, a wonderful, whimsical inventor touched the lives of everyone who knew him and left the boys the book which allow them to connect with a different world they’ve never seen in their lives. The book contains various guides on about eighty topics ranging from how to build a treehouse to how to grow a crystal. It also has quotes, stories, and historical battles that are mandatory for every boy to know. Wyatt, one of Patrick’s sons, is inspired by this and while in the fantasy world he not only manages to reconnect with his father but also learn some valuable life lessons.

Critics were more or less appreciative of the content and said, “There is darkness in the series, but it all bends toward fuzzy good feelings in the end. Actually, it feels pretty fuzzy all the way through, conscientiously warm and mostly predictable. Lessons are learned, right on time. Some viewers, and parents of viewers, will take such qualities as a recommendation, and they’re not wrong to”. If you like this show, you will also enjoy ‘A Series of Unfortunate Events‘.

The Dangerous Book for Boys Cast: Who is in it?

The cast of the show is led by Chris Diamantopoulos, known for his roles in ‘Skylanders Academy‘ and ‘Silicon Valley‘, who appears as both Patrick and Terry McKenna, with the latter being the dopey and unreliable twin of the inventor. Gabriel Bateman of Lights Out‘ and ‘Stalker’ fame appears as his son, Wyatt, while Drew Logan Powell and Kyan Zielinski play Dash and Liam McKenna respectively. Erinn Hayes of ‘Children’s Hospital’ appears as Beth McKenna.

The Dangerous Book for Boys Plot: What is it about?

‘The Dangerous Book’ centers around the McKenna family trying to cope with the untimely passing of Patrick, the family patriarch and a whimsical inventor who touched many people’s lives. While the family is reeling from his loss, hope appears in the form of “The Dangerous Book for Boys,” a handbook that Patrick created to help his three sons. The how-to guide for childhood inspires youngest son Wyatt, who reconnects with his father in a fantasy world. While there, Wyatt learns life skills that help him navigate the real world.

We are introduced to Patrick’s wife who has to look after the children who have some typeset qualities, like being a brainiac, a gentle soul, and a rough-houser. There is a grandmother too, who has apparently led a life of excess which is supposed to be funny, now that she is old. She also happens to keep wanting foot rubs. This then, are the characters, we have to work with. In a show that could have dealt with death with a degree of imagination and flair, it reduces itself to  “a combination of limp adult sitcom that you’ve seen 10,000 times and saccharine childhood feel-good mess, with a bunch of uninspiring whimsy tossed on top”, as The Hollywood Reporter says.

Considering the target audience of the show, perhaps we could forgive it for entering predictable sitcom territory. However, if we are to face facts, we must accept that the intended audience has seen this kind of content numerous times. Having read the book that this show is based on, it could clearly have been much more imaginative since the content is really rich and gives scope to explore various fantasies. There could have been a lot more creativity and tenderness and sweetness of emotions, without the overdoing of it, between the father and the son. However, actual humor and the depth of emotions are eschewed into making this yet another generic show that we have seen numerous times to be truly invested in what it has to say.

The Dangerous Book for Boys Season 2 Release Date: When will it premiere?

‘The Dangerous Book for Boys’ Season 1 premiered on March 30, 2018. As far the next season goes, we don’t have good news for the fans. On August 1, 2018, Amazon announced the cancellation of the show. Amazon Studios head Jennifer Salke had this to say about The Dangerous Book For Boys‘ renewal chances in June, she said, “It’s looking very tough for the cost of the show. It’s really difficult, coming from the genre where it exists and the kind of audience it’s drawing. The math doesn’t quite work.” While there is always a chance of it being picked up again, for now, Season 2 stands canceled.

The Dangerous Book for Boys Trailer:

Check out the trailer for ‘The Dangerous Book For Boys’ season 1 below.