Will There be a The Exorcist Season 3 or is it Cancelled? 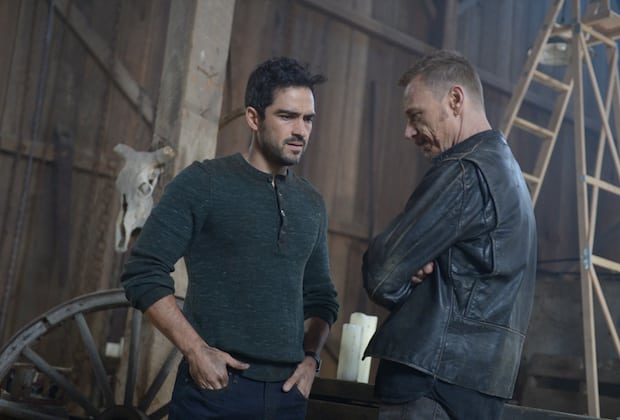 ‘The Exorcist’ is an anthology horror-drama television series created by Jeremy Slater as a sequel to the 1973-released eponymous movie. It forms a part of the ‘Exorcist’ franchise and debuted on Fox on September 23, 2016. Based on William Peter Blatty’s novel of the same name, this winner of the Bloody Disgusting Reader’s Choice Awards and iHorror Awards also garnered a Cine Award in 2016, a huge achievement for a title in this genre. In its inaugural season, the show had some of the finest reviews from critics which continued in its second season. Despite the critical acclaim, it could never gather a dedicated audience base and remained a low-rated show throughout its two seasons.

The story of ‘The Exorcist’ follows two priests, tracking the case of a family, who is suffering from horrifying demonic possession. One priest is Father Tomas Ortega, and the other is Father Marcus Keane. They are both different, personality-wise. The duo is completely unaware of how their life is about to change when they encounter the Rance family who is members of the Thomas parish. They appear like a normal American clan but are not.

The patriarch named Henry Rance is recovering from a traumatic injury. The elder daughter, Katherine has become a recluse and does not want to come out of her room. Her younger sister, Casey, she thinks that there are strange noises coming from the insides of the wall. The mother, Angela, strongly believes that there is something in this house. The demonic presence grows stronger day by day and finally, Angela meets with Father Tomas and seeks help. Father Tomas and Father Marcus both come forward to help Angela, and the story is about their fight with the evil forces.

The second season, titled, ‘The Next Chapter’ premiered on Fox in 2017. After airing for 20 episodes, fans still wish to know if the supernatural drama will be renewed for another installment. Here’s everything you need to know about ‘The Exorcist’ season 3.

‘The Exorcist’ Season 2 premiered on Fox on September 29, 2017. It concluded with its 10th episode on December 15, 2017. The season 2 finale ends with Marcus being devastated after having killed a possessed Andy so that he could save Tomas. As a result, he decides to part ways with his apprentice and teams up with Mouse as the new volunteer. However, the season ends on a huge cliffhanger with God asking Marcus to seek out Tomas, who is on his way toward grave danger.

‘The Exorcist’ received below-average reviews from critics and was the lowest-rated drama on any network during its first season. Despite that, the show was renewed for season 2. Now, although dedicated fans would have wanted to know what happens after the second season, Fox canceled the series after two seasons. In fact, the creators had previously planned to make a 7-year series but simply could not attract enough audience. As per Jeremy Slater’s statement on Twitter, “I know it’s easy to get angry at Fox, but the reality is that we were the lowest-rated drama on any network and they still brought us back for a second season because they loved the show. There are no bad guys in this scenario.”

So, for now, ‘The Exorcist’ Season 3 stands officially cancelled.

The Exorcist Cast: Who Is In It?

You can watch the official trailer for ‘The Exorcist’ Season 2 below. You can also head to Fox if you wish to catch up on all the previous episodes from the show.